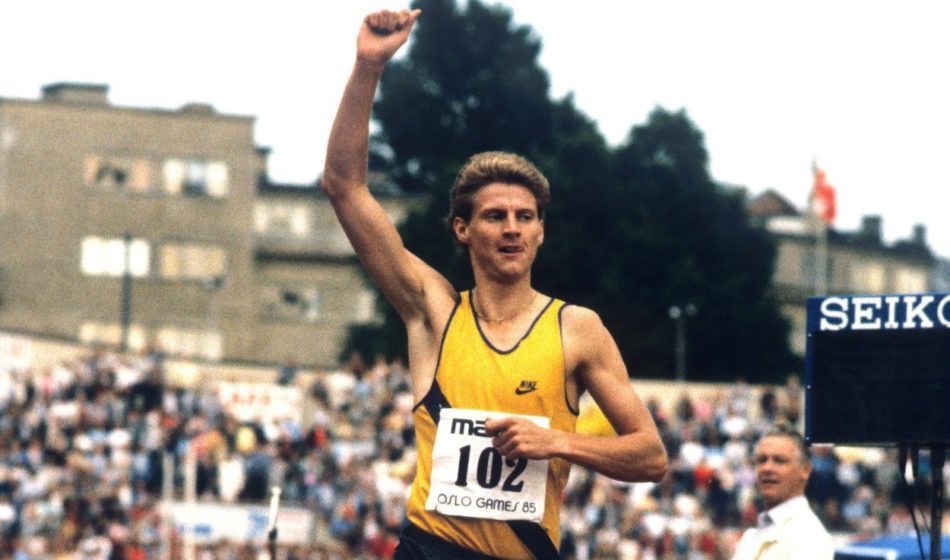 His British record has stood since 1985, but Steve Cram tells AW’s editor he could have run two seconds quicker on that memorable night in Oslo

Of all Steve Cram’s record-breaking achievements, his one mile performance stands out. At the Bislett Games in Oslo on July 27, 1985, he was at the height of his powers. Destroying a world-class field that included reigning Olympic 1500m champion Sebastian Coe, he bounded down the home straight with seemingly an extra gear if he’d needed it and his time of 3:46.32 survives as a UK record today.

During an amazing spell of form, Cram – pictured above in 1500m action at the 1985 Oslo Games – smashed three world records in 19 days. It began in Nice with a 1500m of 3:29.67 where by his own admission he was holding on in the final stages to snatch a narrow victory over Said Aouita of Morocco. After his mile record he then ground out a largely solo 2000m effort of 4:51.39 in Budapest. During the Dream Mile in Oslo, though, he finished with such a flourish that he reckons he was capable of maybe two seconds quicker if he’d been really pushed.

Cram, after all, had not even been going for a record of any kind. His only goal that night was to win.

“I hadn’t really set out to break the record that night or anything,” he says, casting his mind back to that glorious evening almost 30 years ago. “It was just a case of trying to win the race.”

Who can blame him? The field was remarkable with not only double Olympic 1500m champion and mile world record-holder Coe but supermilers such as John Walker, Steve Scott, Ray Flynn, Abdi Bile and Jose Luis Gonzalez.

Pacemakers James Mays and Mike Hillardt led through 400m in 56.01 and 800m in 1:53.82 and as Cram approached the bell in 2:53.14 he was full of running. Coe, who held the world record with 3:47.33 from Brussels three years earlier, began struggle down the back straight for the final time as Cram began to stretch the field. Then, on the final bend, Cram created daylight as he started to glide away and Gonzalez passed the tiring Coe to move into second.

Cram’s mark has since been surpassed as the world record by, firstly, Noureddine Morceli’s 3:44.39 and then Hicham El Guerrouj’s 3:43.13. But unless Mo Farah takes a serious crack at the distance, it looks set to survive as the UK record for some time yet.

So does Cram agree – was it his greatest record? “It’s hard to judge,” he says. “Certainly the easiest record was the mile. I remember crossing the line and feeling ‘woah’ and later that night I said to a few people that if I did 3:46 feeling like that then 3:44 was possible.

“Of course you always think you’re going to get better and run faster. But I never ran a hard mile again in my life when I was in form. So I guess in terms of a physical accomplishment the mile is the one that stands out.”

Does he regret never running faster over the mile? “A little bit. There are two things in an athlete’s career: what you win and how fast did you run and I think I could have run faster in the 1500m and mile. In the 1500m maybe a second quicker and the mile maybe a couple of seconds quicker.”

We are speaking on the eve of the 60th anniversary of Roger Bannister’s first sub-four-minute mile and, looking back, Cram says “there would be a big hole in his career” if he had not broken the world mile record. Being part of the exclusive club of mile record-breakers is special – and sometimes surreal – and he says the mile held a mystique for him at an early age when he read about the exploits of Bannister and then saw Filbert Bayi and John Walker battling it out on television.

Finally I ask the 53-year-old Cram if he has any idea what he can run for a mile these days. He laughs: “I pulled a hamstring three weeks ago jogging, so that tells you where I’m at. Running seven-minute miling is fine, but to run one mile fast? I wouldn’t have a clue!”

» This is an extract from a feature in the May 1 issue of Athletics Weekly. To read the whole article, click here