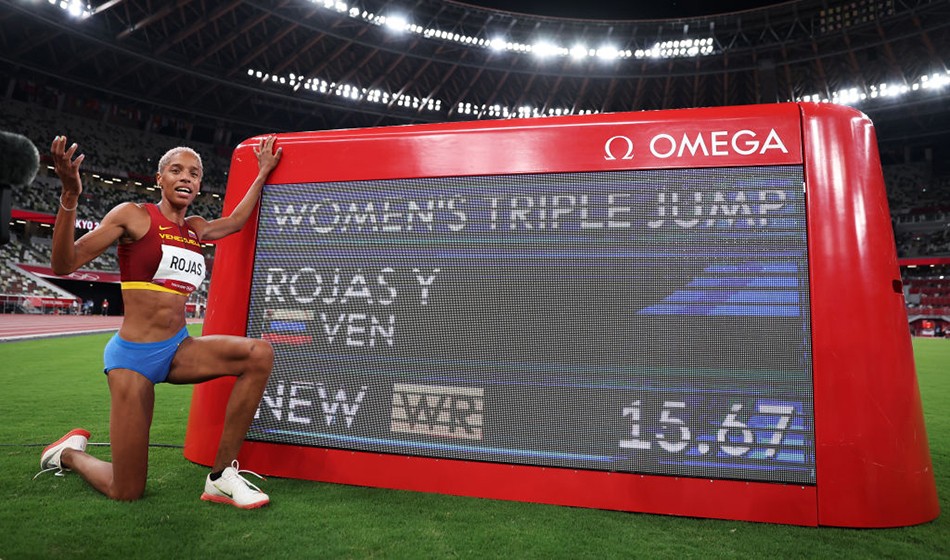 Venezuelan promised she was “on fire” going into the Olympics and she delivered in style with a monster leap of 15.67m in the last round

Going into these Olympic Games you would struggle to find a hotter favourite than Yulimar Rojas. The triple jumper has been a class apart in her event lately, with the world record looking increasingly likely.

Inessa Kravets’ mark of 15.50m has stood since the 1995 World Championships in Gothenburg. In Tokyo on Sunday (August 1) Rojas effectively sealed gold with an Olympic record of 15.41m in the first round and then jumped out to 15.67m (0.7) in the sixth round to finally beat the Ukrainian’s global record.

The athletics world will applaud the fact Kravets’ mark is now consigned to history. In 1993 she was suspended for taking stimulants and then received a two-year ban in 2000 for a steroid positive.

On the eve of the Games, Rojas promised the record would be hers soon. “Estoy en llamas” – or “I am on fire” – she told the Latin American media.

She also predicts she will be the first woman to break the 16-metre barrier too. Maybe she would have got closer if the Olympic Stadium had been packed with people and noise.

During her attempts she tried to rally the small number of onlookers in the arena by urging them to clap for her as she charged down the runway. She is a natural entertainer and relished the stage. At one point in the third round she sailed way beyond Kravets’ world record and began to celebrate, only to realise it was a foul. 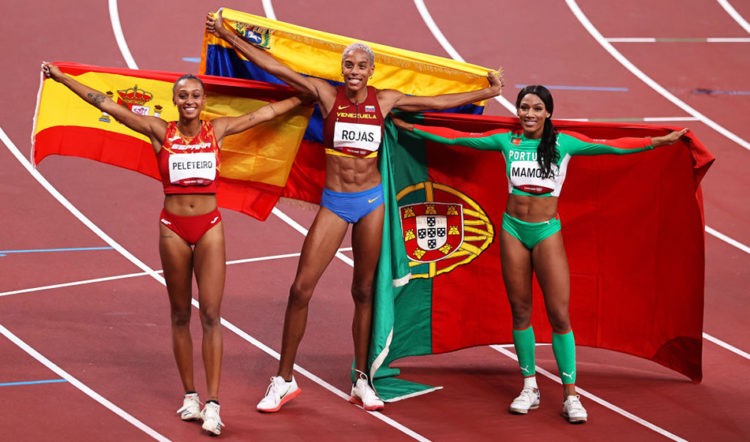 In the battle for minor medals, Rojas’ competitors were more than half a metre adrift, but Patricia Mamona rose to the occasion with a Portuguese record of 15.01m for silver. In third, Ana Peleteiro jumped a Spanish record of 14.87m to take bronze just 3cm ahead of Shanieka Ricketts of Jamaica.

Outside of the records, Rojas won Venezuela’s first Olympic gold in athletics. It was also just the third gold in history at the Games following a men’s boxing title in 1968 and men’s fencing victory in 2012.

Five years ago in Rio she took Olympic silver behind fellow South American, Caterine Ibargüen of Colombia. Back then, Rojas described herself as “a novice” and an “emerging athlete”.

But she has been a growing force since, taking the world titles in London 2017 and Doha 2019 and becoming increasingly consistent in the 15-metre-plus zone. Ibargüen, meanwhile, is now aged 37 and was 10th in Tokyo with just 14.25m.

Rojas set the world indoor record with 15.43m earlier this year in Spain, where she is based most of the year. When AW interviewed British triple jump legend Ashia Hansen recently the former world indoor record-holder suggested the event had not moved on much since her retirement. Well, it has now. 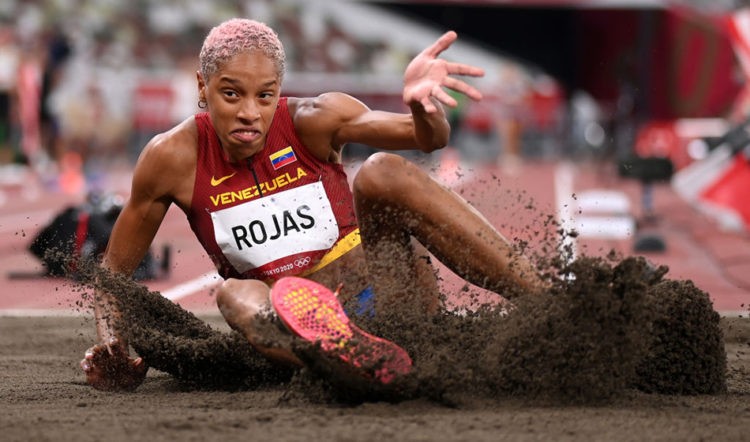 Not only is Rojas a tremendous athlete but she is a fascinating character. With a chameleon-like appearance, she regularly dyes her hair different colours and in Tokyo was sporting white with a tinge of pink. “It transmits hope and strength,” she says.

She is coached by Iván Pedroso, the Olympic and four-time world long jump champion from Cuba. Outside athletics she is a member of the LGBT community.

“I am lost for words, I can’t describe this feeling and this moment,” said Rojas. “Gold medal winner, with an Olympic record, and a world record … Wow. It is a fantastic night.

“I was looking for it, I knew we had that distance in my legs to get it today. I was failing a bit in the technical aspect, but the last jump was one to give everything, and it was like that.

“I focused on giving my best, enjoying… and it came out. It makes me happy. I have to enjoy it now and live the experience.”