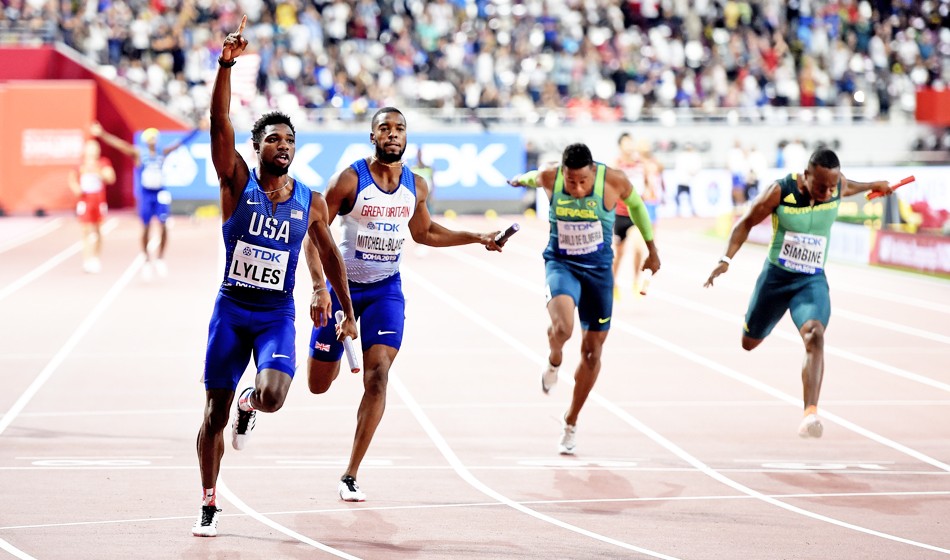 The USA ran the second-fastest 4x100m relay time in history to land their eighth world gold at the event and wrestle the title back from Great Britain.

A quartet of Christian Coleman, Justin Gatlin, Mike Rodgers and Noah Lyles clocked a US record of 37.10 to hold off Adam Gemili, Zharnel Hughes, Richard Kilty and Nethaneel Mitchell-Blake as the defending champions broke the European record in 37.36 but had to settle for silver.

Japan completed the medal winning line-up as they won bronze in an Asian record of 37.43, while there was another area record as Brazil clocked 37.72.

The rapid pace of the Doha final meant that Britain’s winning time of 37.47 from London 2017 would not have been good enough to even earn a place on the podium.

“We had a meeting at breakfast and decided if we ran a super-fast time we could do this,” Rogers said of a squad which contained the new 100m and 200m world champions and only has the Jamaican team which ran 36.84 in 2012 ahead of them in the all-time standings.

Britain are third on that list and Gemili, part of the squad which struck gold two years ago, said: “Sometimes you have to hold up your hands and we tried our best. Hopefully it was a good show for the crowd.

“Leaving with something is fantastic and puts that little spark in us for next year to push on.”

Hughes revealed he had paid a price for his efforts, adding: “I think I strained my hamstring but I came out here tonight to give it my very best regardless and just before I handed off the baton is when I pulled my hamstring.

“I was like ‘I have to give it to Richard regardless’ because I wanted the guys to get a medal, including myself. Today was about the teamwork and I definitely think with the guts and glory that I have and the fighter that I am, I did my best and came away with a medal and I’m happy to be going home with something around my neck.” 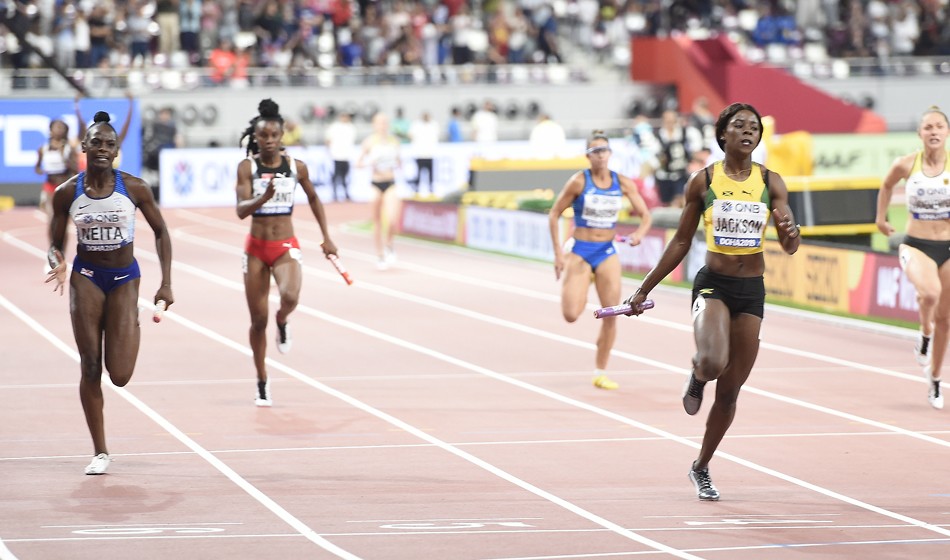 Fraser-Pryce leads the way for Jamaicans

Shelly-Ann Fraser-Pryce helped Jamaica to gold in the women’s 4x100m relay ahead of a British team that included Dina Asher-Smith as she won her third medal of the championships.

Natalliah Whyte, Fraser-Pryce, Jonielle Smith and Sherika Jackson ran 41.44 – the fastest time in the world this year – to claim the title as the British team of Asha Philip, Asher-Smith, Ashleigh Nelson and Daryll Neita clocked 41.85 for silver.

United States finished third in 42.10 ahead of Switzerland and Germany.

“This evening running the relay with Great Britain and the United States was fantastic,” said Fraser-Pryce. “This year the women really turned up. Next year at the Olympics no team can take anything for granted.”

The British team had a last-minute rejig of the team, too, after Imani-Lara Lansiquot twinged her thigh in the warm-up. Philip was brought in to run the first leg off little notice and Asher-Smith said: “We haven’t practiced any of those particular exchanges that we ran tonight.”

Asher-Smith, who won 200m gold and 100m silver earlier in the week, added: “We all handled the situation fantastically and it’s testament to the experience we’ve all got in the squad and between us.”

Reprieve for 4x400m British men’s team as women ease through

It looked as if Great Britain’s 4x400m team had failed to reach the final of the event at a world championships for the first time  since 1999 after the quartet of Cameron Chalmers, Rabah Yousif, Lee Thompson and Martyn Rooney finished fifth with a time of  3:01.96 in their heat.

The disqualification of Botswana, however, moved them up into a fastest loser’s qualification spot and they will now feature in Sunday’s final.

In the women’s event, the British team of Zoey Clark, Jodie Williams, Jessica Turner and Laviai Nielsen clocked 3:24.99 to come second behind the USA (3:22.96), while Ukraine took the final automatic slot in 3:26.57 from the second heat.

In the 100m hurdles, favourite Danielle Williams ran the fastest ever world champs first round heat with a 12.51 but it did not last as Tobi Amusan ran a PB 12.48 in the final heat.

World record-holder Kendra Harrison ran 12.55, while Britain’s Cindy Ofili was a qualifier in third in her heat in 12.97 but was only 19th fastest overall.

Olympic champion Brianna McNeal was disqualified for a false start. She initially complained but realised her mistake when she saw the starter’s details and was very distressed afterwards.