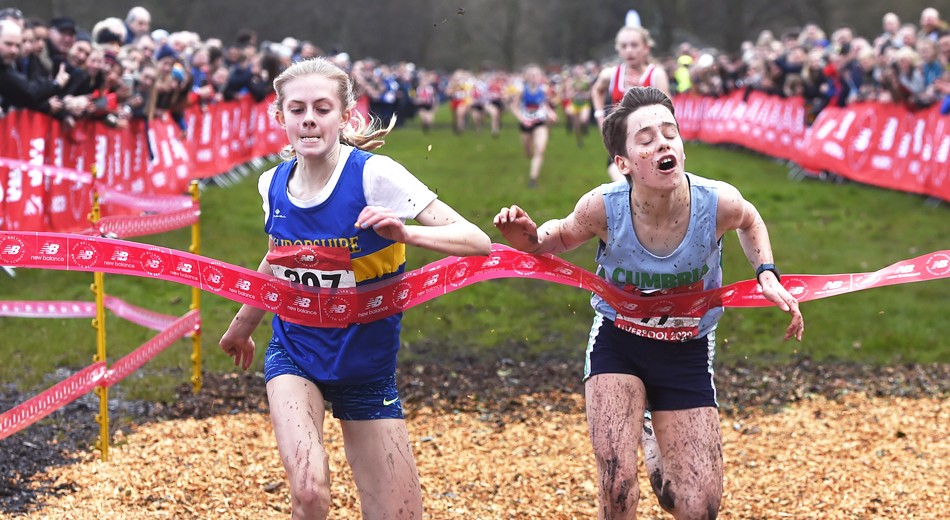 Despite the sporting shutdown around the world, about 2000 teenage runners defied coronavirus fears to race in Liverpool

If the 2020 English Schools Cross Country Championships is the final big domestic athletics event to be staged for some time due to the coronavirus outbreak, it will prove a terrific reminder of how exciting the sport can be.

The New Balance-sponsored meeting at Sefton Park in Liverpool on Saturday (March 14) featured six highly competitive races full of drama. None more so than the junior girls race where Zoe Gilbody (main photograph above, left) beat Jessica Bailey (above, right) by the thickness of a vest.

Shropshire runner Gilbody won the Inter-Counties under-13 title seven days earlier despite losing one of her spikes midway through the race and here, at a boggy Sefton Park, she came from behind to pip Bailey, the English Schools fell running champion from Cumbria, by a margin that was so close it took judges several minutes to reach a decision using a mixture of camera footage and the timing chips on the athletes’ shoes, which Gilbody managed to keep on her feet this time.

Zoe Gilbody (closest to the camera) pips long-time leader Jessica Bailey to win the junior girls #EnglishSchools title by the thickness of a vest. Neither athlete knew who has won for almost 10min. pic.twitter.com/J6K193iseB

The junior girls event also featured a close race for positions with only three seconds separating positions 6-12. It could have caused a headache for SIAB Schools Cross Country International selectors if it were not for the fact that the event, which is due to take place in Scotland next weekend, is one of the many that have been cancelled due to coronavirus.

Only around half a dozen children were pulled out of the Sefton Park event by nervous parents. Otherwise, county teams travelled from every corner of England to compete and dutifully followed the official advice from organisers to “bring soap or hand sanitiser to wash their hands in the toilets on the site”. Although, as it turned out, the ground was so muddy they needed plenty of soap for their legs too.

One county that turned up in force was Cumbria. In addition to Bailey’s narrow loss in the under-13 girls race, the county enjoyed victories from Olivia Mason in the senior girls race and Fraser Sproul in the inter boys event – a tremendous achievement for one of the competition’s smallest counties.

For Mason (pictured below) it was her second English Schools cross-country title with her mum, the former 800m international Natalie Tait, proudly watching as the 18-year-old strode away from runner-up Molly Canham of Devon and third-placed Charlotte Alexander of Surrey to win by 11 seconds. 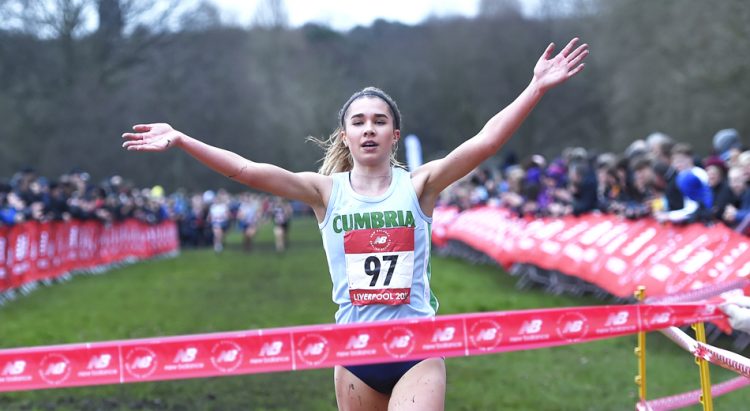 Sproul, meanwhile, added to Cumbria’s medal haul with gold in the inter boys race after breaking away from Louis Small of Kent in the long finishing straight as Woody Jerome, an English Schools winner in 2018 from Surrey, placed third followed by Rhys Ashton of Lancashire and Inter-Counties champion Lewis Sullivan, who was racing against older rivals, in fifth.

The senior boys race was similarly stacked and saw Matt Stonier of Kent beat Josh Dickinson of North Yorkshire in yet another home straight shoot-out. With the course at its muddiest in the final race of the day, Stonier cruised over the greasy surface to follow-up his Inter-Counties victory from seven days earlier at Prestwold Hall.

On a day of breathless action there was another exciting finish in the inter girls race when Bea Wood of Wiltshire broke away from Kiya Dee of Gloucestershire in the final stages to win by three seconds. Seven days earlier Wood had won the Inter-Counties under-17 title while Dee won the under-15 gold. It was not a two-horse race, though, as 2019 champion Beth Cook put up a plucky defence in third despite struggling with an Achilles injury lately.

Ben Peck’s victory in the junior boys race was more straightforward, though, as he front-ran his way to a 13-second victory over Suffolk team-mate Henry Dover.

» See the March 19 issue of AW magazine for 9-10 pages of photographs, interviews and reports from Sefton Park

The @BritAthletics Olympic Games 20km race walk trial event is set to take place at Kew Gardens, London, on March 26 - the same day and venue as the marathon trials.