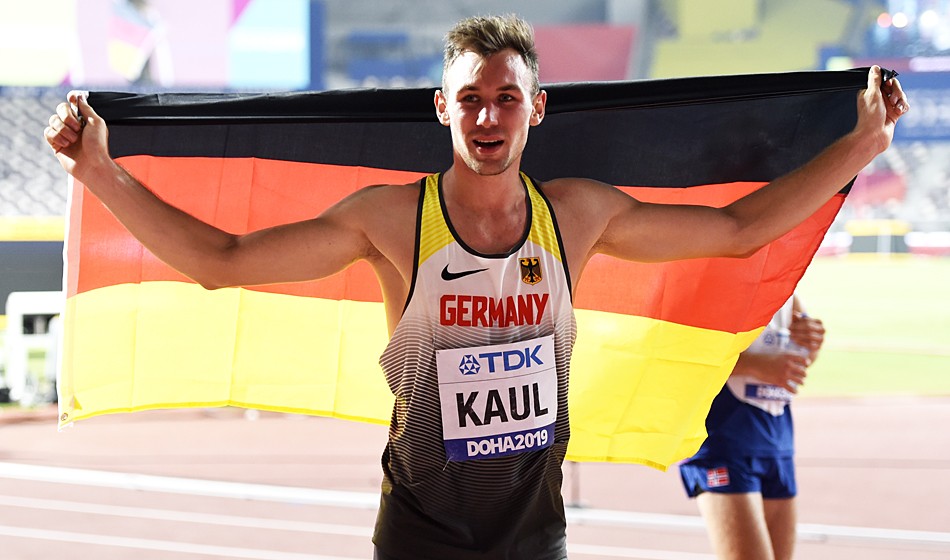 Niklas Kaul crossed the finish line of the final event of the decathlon, the 1500m, in first place and raised his arms in victory. It was 12:36am in Doha in the early hours of October 4, but the 21-year-old German was not dreaming. He had just won the world title.

Kaul scored 8691 in a battle of attrition that saw, among other things, the withdrawal of Kevin Mayer in the pole vault. The world record-holder from France was leading the decathlon at that stage – in the eighth event – but broke down in tears after being forced to pull out due to injury.

Kaul, who placed only 11th at the end of the first day, beat the best men who were left standing and they included Maicel Uibo, the Estonian scoring a PB of 8604 to take silver, plus Damian Warner, the Canadian scoring 8529 in third.

“In the beginning we all thought Kevin would take the gold and when he dropped out the race was on for the gold between Damian, Maicel and me,” said Kaul, who has won world and European under-20 titles in recent years plus the European under-23 crown earlier this summer.

“I never thought I’d be able to take the gold because there are so many good talented decathletes out there. I’m not the best decathlete but maybe I’m the best consistent and that’s important when you have these long days,” he added.

Runner-up Uibo is following in the giant footsteps of Olympic champion Erki Nool from his own country and put in a gallant effort in Doha after struggling with a shoulder injury this year and heel surgery last year. He also had the distraction of his wife, Shaunae Miller-Uibo, competing in the 400m final at the same time his own 10 events were reaching their conclusion. “I only watched it by refreshing a results page while I was on a massage table,” he said.

Warner, winner in Gotzis this year and winner of two minor medals at the world championships, looked disgruntled with his two days – and another minor medal. “I set high standards for myself,” the Canadian said.