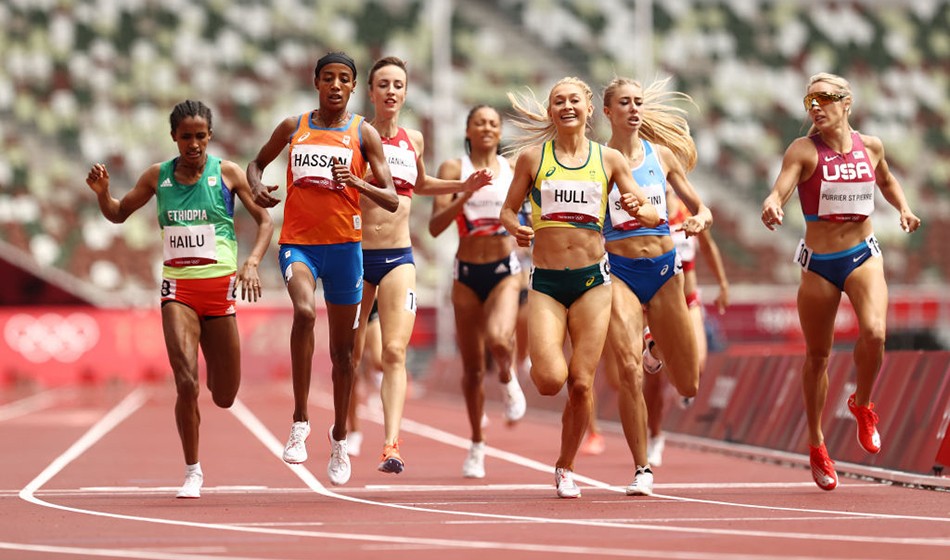 Sifan Hassan wins her 1500m heat after a fall (Getty)

The treble is still on for the Dutch athlete after she picks herself up from the track following a trip to qualify for next round, while there is drama in the women’s 200m heats too

Sifan Hassan’s ambitious plan to tackle the 1500m, 5000m and 10,000m at the Tokyo Games was briefly hanging by a thread on Monday morning in Tokyo when she hit the ground hard with about 380m to go in her 1500m heat before rising to her feet and charging through the last lap to win the race.

Canadian runner Natalia Hawthorn was a few metres ahead of Hassan and appeared to stumble, setting off a chain reaction which resulted in Kenyan Edinah Jebitok falling over.

Jebitok’s fall caused Hassan to go down and the Dutchwoman’s dreams of tackling a treble in Tokyo looked temporarily over. However she got up and immediately began sprinting, moving from 12th to first place to win the heat in 4:05.17.

Hassan looked unruffled after the race and she is due to race in the 5000m final at 21:40 local time on Monday night. Jebitok, however, who finished 12th, said: “I was feeling really good before the race. I thought I started pretty good and then the incident happened.

“To train so hard to get to the Olympics and then for something like this to happen to me is very devastating.” 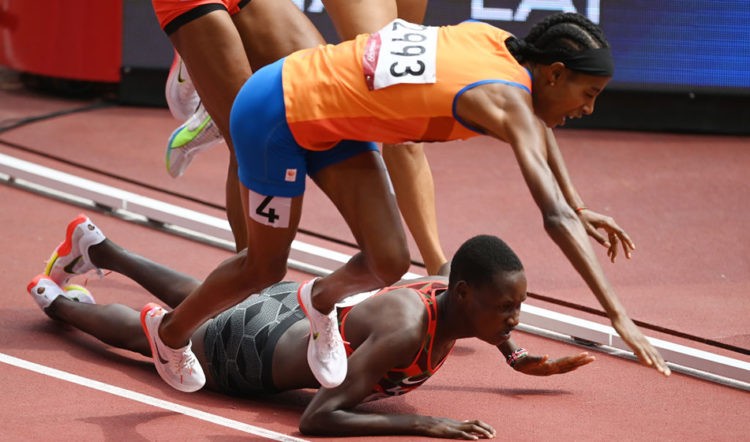 In the same race Revee Walcott-Nolan of Britain ran a PB of 4:06.23 but finished seventh and will not progress to the semi-finals.

“I deserve to be here,” said Walcott-Nolan. “I know I can run a lot faster than 4:06 and I just had to put myself in contention and not be scared and I’m happy I’ve done that. But obviously [I’m] gutted I didn’t make the semi-final because I know it was definitely achievable.”

British team-mates Laura Muir and Katie Snowden did progress, however.

Gabriela DeBues-Stafford of Canada won the first heat with Muir close behind in second with 4:03.89 after a 2:04.4 last two laps and 59.3 final lap.

Faith Kipyegon took the third and final heat in 4:01.40, with Katie Snowden clocking a PB of 4:02.77 to qualify in sixth place.

“If someone had said I would run a PB in the heat I wouldn’t believe it,” said Snowden. “I know I am in really good shape, but with the start time and first round is always a bit nerve-racking.”

Christine Mboma beat Allyson Felix’s world under-20 record with 22.11 as she beat US Trials winner Gabby Thomas (22.20). It was the quickest time of the women’s 200m heats and a Namibian record.

Only 18, Mbomba was one of the Namibian athletes who were barred from running the 400m in Tokyo due to high natural testosterone levels. 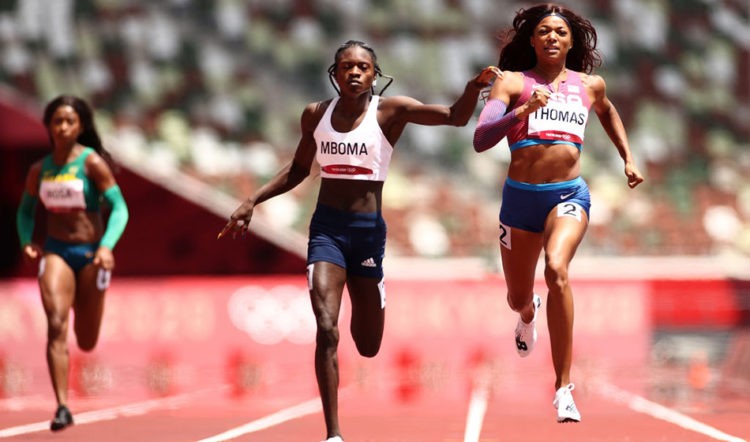 Christine Mboma and Gabby Thomas in the 200m heats (Getty)

The heats also saw one of the 200m favourites, Shericka Jackson of Jamaica, bomb out after she inexplicably slowed down in the closing metres and went from second to fourth in her heat.

Behind Mboma and Thomas, the next fastest was Shelly-Ann Fraser-Pryce with 22.22. Then followed Mujinga Kambundji of Switzerland (22.26), Marie-Josee Ta Lou of the Ivory Coast (22.30) and Shaunae Miller-Uibo (22.40).

Britain’s Beth Dobbin also progressed with 22.78, just ahead of Olympic 100m champion and defending 200m champion Elaine Thompson-Herah – the Jamaican taking it easy as she clocked 22.86 to finish third in a race won by Crystal Emmanuel of Canada in 22.74.