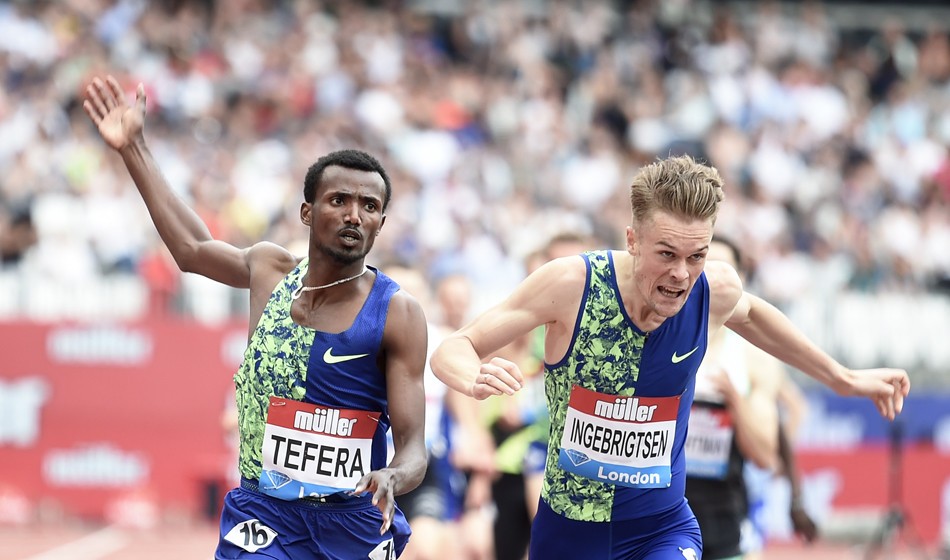 Until this weekend Haile Gebrselassie was the last – and only – Ethiopian to win the Emsley Carr Mile. The legendary runner won the race when it was held at Gateshead in 1999 and now, 20 years later, Samuel Tefera followed in his fellow countryman’s famous footsteps by out-kicking Filip Ingebrigtsen in a thrilling finish on day two of the Müller Anniversary Games in London.

Tefera’s time of 3:49.45 was also the quickest since 2003 as he held off Ingebrigtsen, who ran a Norwegian record of 3:49.60. It meant the 19-year-old wrote his name into history – quite literally, because a post-race tradition is for winners to sign an Emsley Carr Mile book which dates back to 1953 and includes names such as Seb Coe, Steve Ovett and Hicham El Guerrouj.

“I am very happy to get the win and to be the quickest in the world this year,” said Tefera, who won the world indoor title in Birmingham last year. “It was very strong competition so I knew I had to push all the way to the line.”

Similar to Saturday’s middle-distance races on the first day of this Diamond League meeting, there were a number of good British performances further down the field. Jake Wightman, the 2018 Emsley Carr Mile winner, clocked a PB of 3:52.02 in third. Chris O’Hare ran 3:53.35 in seventh, just ahead of Josh Kerr, who clocked a PB of 3:53.88, while Jake Heyward continued his comeback from injury to clock a fine 3:54.78 in 10th and Piers Copeland and James West also broke four minutes with PBs.

Zhenye Xie clocked an Asian record of 19.88 (0.9) as Miguel Francis clocked 19.97 in second to go equal third on the UK all-time rankings with Adam Gemili. “I’m not in the greatest shape so to run 19.97 in the shape that I’m in is actually very pleasing,” said Jamaica-based Francis, who was born in the British overseas territory of Montserrat and has a PB of 19.88 set before he transferred his allegiance to GB.

Behind, fellow Brit Nethaneel Mitchell-Blake ran 20.28 in fifth while European under-23 champion Shemar Boldizsar was eighth in a PB of 20.56. Earlier, Mitchell-Blake had anchored a GB team that included CJ Ujah, Zharnel Hughes and Richard Kilty (pictured below) to a world lead and meet record of 37.60 ahead of Japan (37.78) and Netherlands (national record of 37.99). 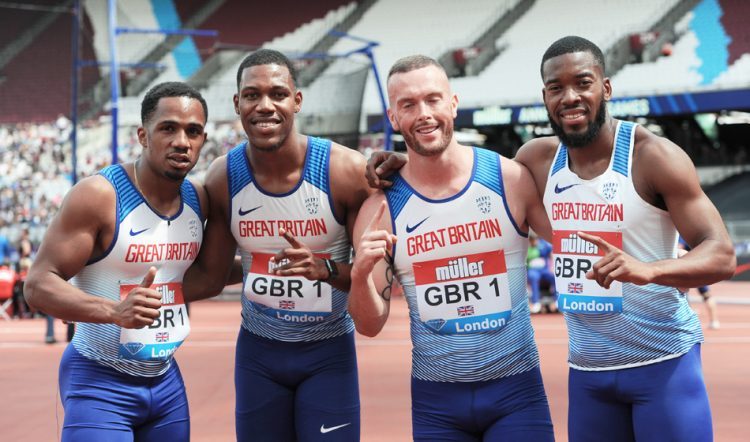 There was a large contingent of Chinese media in London and they saw another of their athletes, Wenjun Xie, win the 110m hurdles in 13.28 from Wilhelm Belocian as Britain’s Andrew Pozzi finished sixth in 13.52.

Daniel Stahl won the discus in a meeting record of 68.56m but all eyes were on British record-holder Lawrence Okoye as he made his first competitive appearance since 2012 and threw 60.80m to finish ninth and one place ahead of up-and-coming fellow Brit Greg Thompson. Okoye has been absent from athletics since London 2012 in order to play American Football and, while he is still living in the United States, he says he is having fun on his return to athletics and is targeting the British Championships next month in Birmingham.

There was also a comeback in the high jump as Mutaz Essa Barshim made his first Diamond League appearance for more than a year but the world champion from Qatar was beaten by Majededdin Ghazal as the Syrian leapt 2.30m to beat Barshim’s 2.27m.

Results can be found here, while a women’s events report is here.