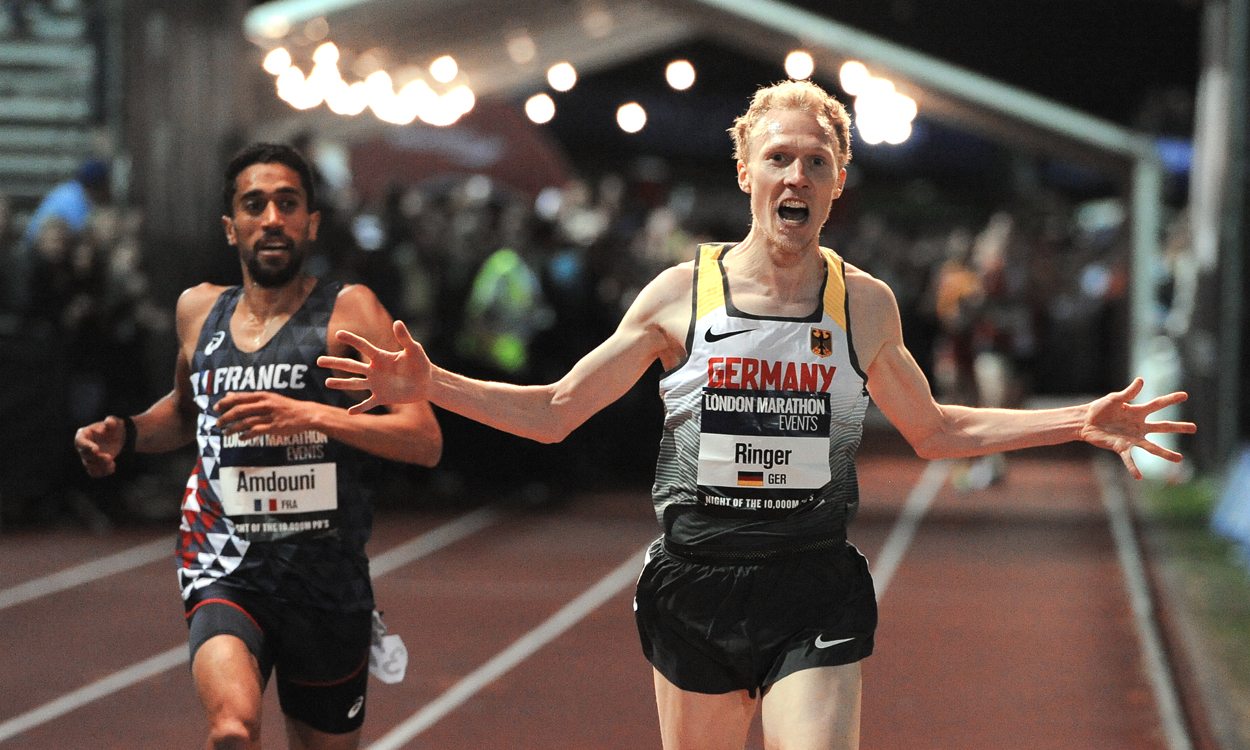 After 25 laps of blood, sweat and cheers, Richard Ringer of Germany edged out Morhad Amdouni of France in a sprint finish to take the men’s race at the Highgate Night of the 10,000m PBs in 27:36.52.

As a large and noisy crowd at the north London venue on the edge of Hampstead Heath roared home the runners on Saturday evening, Amdouni clocked 27:36.80 for a close second with Yeman Crippa of Italy third in 27:44.21 and Adel Mechaal of Spain fourth in 27:50.56.

Moments after crossing the finish line, Ringer screamed with joy. “Danke! Danke!” he shouted at German team-mates before telling AW: “This is the best track race I have ever done. The energy was crazy!

“It’s not typical for fans to stand in lane three. Of course I had heard of this race before I came here and I find it wonderful that you integrate the national championships.

“Usually 10,000m is a little bit boring but nothing was boring tonight. There was food, drink, music and some crazy races.”

There were also fire jugglers, drummers and an RAF flyover during a meeting that began in sun-drenched conditions but soon turned chilly once darkness fell for the main men’s race at 9.15pm.

Prior to Saturday Ringer’s best was 28:05 from Stanford last year. So he was delighted to run a big PB and also proud of the fact he is self-coached.

“For me this was to get a 10,000m option at the European Championships in my home country in Berlin in August,” he said. “It was perfect for me that it wasn’t so fast in the beginning.”

The runners passed halfway in a fraction outside 14 minutes with Amdouni, Mechaal, Ringer, Crippa, Thompson, Vernon and Yee in the lead group. “I felt strong in the second half and I knew that after 7km the race really begins,” said Ringer.

With six laps to go the Brits were slightly detached from a four-man lead breakaway group of Ringer, Amdouni, Mechaal and Crippa. Then, with just over a mile to go, Ringer made a break and only Amdouni could go with him.

Into the last lap the duo were locked in battle and Ringer later admitted he was worried about Amdouni’s finishing speed, but the German had superior strength and held on in the home straight.

Amdouni had two targets – the victory and the long-standing French record of Antonio Martins of 27:22.78 – but the 30-year-old was left a slightly frustrated runner-up after missing the mark by 14 seconds and the win by only a quarter of a second.

He will get his chance for revenge at the European Championships in a couple of months’ time, though, as that race in Berlin could very likely see a similar start list to the one at Highgate.

» See more in the May 24 issue of AW magazine. A report on the women’s race can be found here