Records tumble as stars come out to play in Staten Island 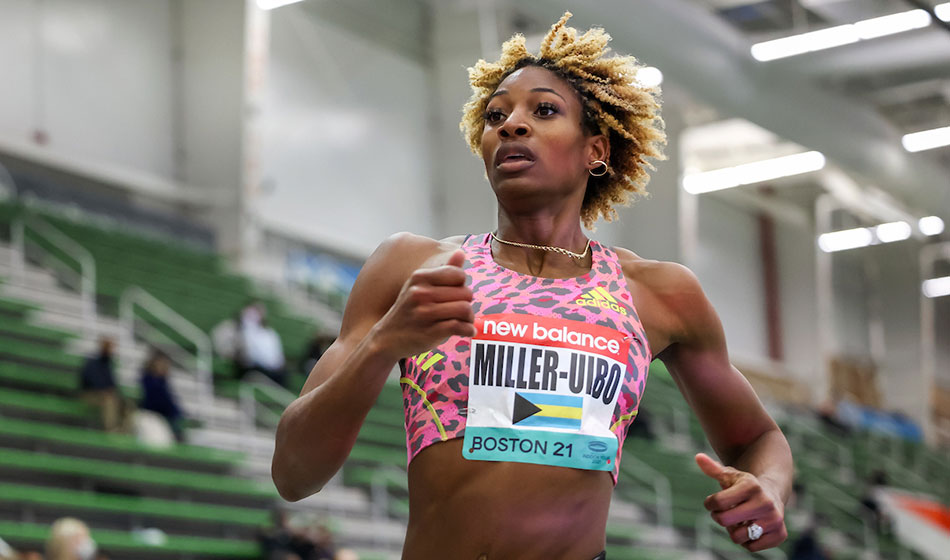 There had been high hopes for fast times at the New Balance Indoor Grand Prix and the latest stop on the World Athletics World Indoor Tour did not disappoint as a swathe of national records fell in New York.

The meeting had been moved to the impressive Ocean Breeze facility in Staten Island due to the original venue of the Reggie Lewis Centre in Boston being used as a Covid-19 vaccination centre. And while the showpiece shorter sprints perhaps didn’t completely live up to expectations, much of the action was of a very high quality as some of the world’s biggest stars came out to play.

One of the most impressive showings came in the women’s 400m, as Olympic champion Shaunae Miller-Uibo broke the Bahamian record in a world-leading 50.21 in what was her first indoor run over the distance in seven years. It moved her to fifth on the all-time standings. American Wadeline Jonathas was second in 51.95, with Jessica Beard third in 52.60.

The men’s two-mile event – won by Justin Knight’s world-leading 8:13.92 – had seen the first national record of the night set by third-placed Australian Morgan McDonald when he clocked 8:14.92 but there was also a remarkable performance from his compatriot Oliver Hoare in the 1500m.

Britain’s Jake Wightman, in his first outing of the year, had led from the front for much of the race until the closing lap, when Hoare’s closing 300m of 41.67 led him to the line first in a time of 3:32.35 which placed him seventh on the all-time list.

In finishing second, Wightman came perilously close to Peter Elliott’s 21-year-old British indoor mark of 3:34.20, but the European and Commonwealth medallist’s PB of 3:34.48 is a Scottish indoor record. New Zealand’s Sam Tanner clocked 3:34.72 for another national mark as nine of the field set personal bests.

The 1500m had followed hot on the heels of a memorable men’s 1000m encounter in which there was a British record for Charlie Da’Vall Grice to celebrate. Bryce Hoppell won the race in a North American record of 2:16.27, but Da’Vall Grice had pushed him hard for much of the encounter, the Briton eventually clocking 2:17.20 for third, with Canada’s Marco Arop second in 2:17.10.

Another of the evening’s talking points came in the women’s two-mile event. Many believe Elle Purrier to be a star in the making and her time of 9:10.28 was not only an outright North American record but placed her third on the all-time list. Only two women – Genzebe Dibaba and Meseret Defar – have ever gone quicker either indoors or out.

In seventh place, Amy Eloise Markovc clocked a British record of 9.30.69, with her 3000m time of 8:54.11 en route not only a PB but also within the qualifying standard for next month’s European Indoor Championships.

Another North American record fell in the men’s 800m when world champion Donavan Brazier broke his own mark with 1:44.21, while a third consecutive personal best from Britain’s Jamie Webb of 1:46.26 gave him second spot ahead of Erik Sowinksi (1:47.65).

The women’s race was won by world bronze medallist Ajee’ Wilson, who was a late entrant but was a convincing winner when clocking 2:01.79 to take the victory ahead of fellow American Kaela Edwards’ 2:02.17. There was a superb third place for Britain’s Isabelle Boffey thanks to her indoor PB of 2:02.45, which was inside the European Indoor Championships qualifying standard. Her fellow Briton Adelle Tracey tired in the latter stages to run 2:04.28 for seventh. 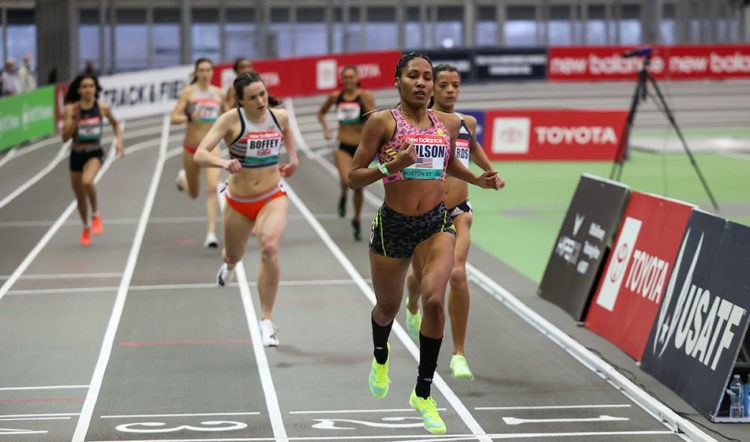 When it came to the shorter sprints, the 100m hurdles world record holder Keni Harrison clocked a world-leading 7.82 in winning the 60m hurdles, with Britain’s Tiffany Porter equalling her season’s best of 7.89, the same time clocked by third-placed Gabrielle Cunningham. Britain’s Cindy Semper was fifth in 8.22, with world 400m hurdles silver medallist Sydney McLaughlin struggling in eighth with a time of 8.56.

An impressive late surge from Trayvon Bromell gave him 60m victory in a time of 6.50 ahead of fellow Americans Demek Kemp (6.65) and Maurice Eaddy (6.67), while in the women’s race Kayla White’s PB of 7.15 landed her the win from Hannah Cunliffe’s 7.17, with Candace Hill clocking 7.19 in third.

As expected world champion Noah Lyles did take the 200m honours but didn’t seem overly impressed with himself after a run of 20.80 which saw him finish ahead of Deon Lendore (20.92) and Jaron Flournoy (21.26). Lyles had also run 6.76 in the 60m heats earlier in the evening.

In the two field events, Trey Culver cleared a world-leading and PB-equalling 2.33m to break the meeting high jump record, while world indoor champion Sandi Morris won the pole vault with a best clearance of 4.60m.