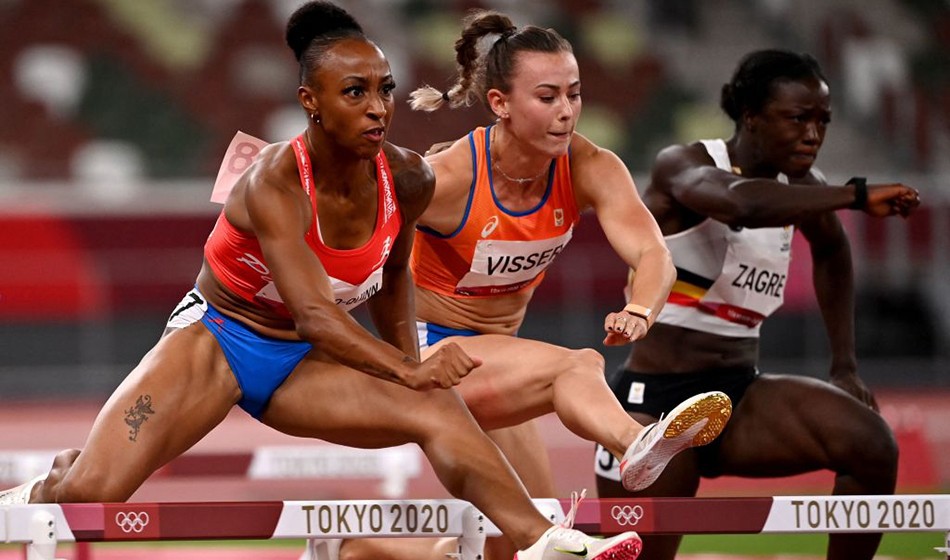 Five years ago Jasmine Camacho-Quinn crashed out of her sprint hurdles semi-final at the Rio Olympics after hitting a barrier. The Puerto Rico athlete was still a teenager back then, though, whereas now, aged 24, she is favourite going into Monday morning’s final in Tokyo after a scintillating semi-final run.

The performance lifted Camacho-Quinn from seventh to No.4 on the world all-time rankings, looking in total control as she glided over the barriers.

“Honestly, the main thing was just to make it through,” said Camacho-Quinn. “Five years ago I didn’t make it through so I just wanted to have the speed to get to the final.

“I just take it step by step. Don’t overthink it, don’t panic and everything will happen. That’s what you just saw right there.”

Harrison, of the United States, also qualified with 12.51 (0.0) but she was runner-up to Jamaican talent Britany Anderson, who ran a PB of 12.40 (0.0), in a semi-final that featured three false starts.

“Everyone hopes to bring their A game and I will give it everything I’ve got,” said Harrison ahead of the final.

Tobi Amusan of Nigeria, Megan Tapper of Jamaica, Nadine Visser of the Netherlands, Devynne Charlton of Bahamas and Gabriele Cunningham of the United States also qualified for the final.

But British duo Cindy Sember and Tiffany Porter went out. Sember was seventh with a time of 12.76 in Camacho-Quinn’s semi, whereas Porter was fifth in 12.86 in Anderson and Harrison’s race.

Porter, 33, said: “It was definitely a blessing having my sister here and to be able to experience this one last time with her. Obviously I would have preferred for things to go differently but that’s sport and I’m definitely going to hold my head up high every day knowing that every day of my career I put my best foot forward and I did it with integrity, so I can definitely rest on that.”

Younger sister Sember added: “It was fast, but to be fair I didn’t feel like myself and execute the race as I have been all season, so that’s a bit unfortunate, but to be in such a quick race and go against so many competitive girls was a blessing and to be here with my sister again is just amazing, so I’m very grateful.”

The men’s 400m hurdles final on Tuesday looks set to be one of the races of the Games.

Karsten Warholm came into the Olympics fresh from setting a world record of 46.70 and he won his semi-final on Sunday morning in Tokyo, but American rival Rai Benjamin pushed him close as the pair were separated by seven hundredths of a second.

Warholm ran 47.30, with Benjamin, who was running on his inside and leading into the home straight, clocking 47.37. The Norwegian edged ahead in the final metres to secure the best possible lane for the final and possibly to prove a point, too.

Behind, Yasmani Copello of Turkey clocked 47.88 in third while Ireland’s Thomas Barr ran 48.26 in fourth, missing out on a place in the final in what was a stacked race. 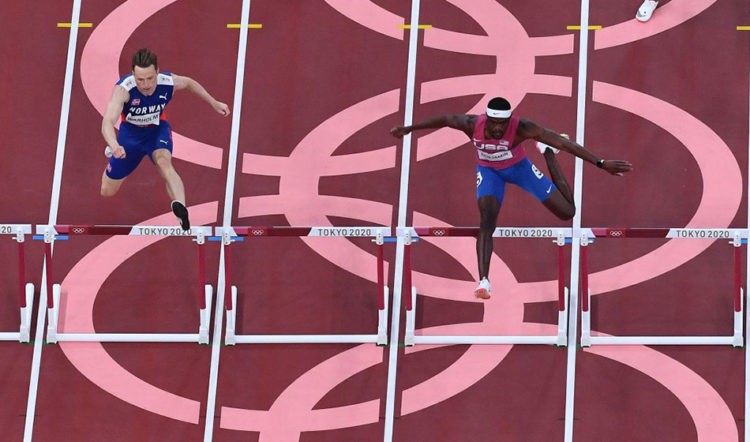 Alison dos Santos of Brazil will be a feature in the final, too. He has been in great form this year and ran 47.31 to win his semi-final ahead of a resurgent Abderrahman Samba – the Qatari clocking 47.47.

The final heat was not as fast, with Kyron McMaster of the British Virgin Islands taking the win in 48.26 from Rasmus Magi’s Estonian record of 48.36.

These were probably the most competitive 800m semi-finals in history as just 0.8 of a second covered the fastest 13 athletes and less than second for the top 16.

The two British representatives were among that very close time span but both just missed out in frustrating fashion.

The first semi-final was a tight affair. American Bryce Hoppel led through 400m in 52.12 and at 600m Belgian Elliott Crestan put in a big burst to power around the bend into a clear lead. However he began to tie up and left a gap on the inside which European indoor champion Patryk Dobek used to his advantage and a strong kick took the Pole to victory in 1:44.60.

It was close for second with Emmanuel Korir, who had seemingly got himself deliberately disqualified from the 400m heats earlier in the day, having too much speed for Mexican Jesus Lopez as the pair ran 1:44.74 and 1:44.77.

He faded in the straight, though, as Australian Peter Bol won and improved his Oceania record to 1:44.11.

USA’s Olympic bronze medallist and trials winner Clayton Murphy was lucky to find gaps all the way up the finishing straight, having been badly boxed in, and edged second in 1:44.18. 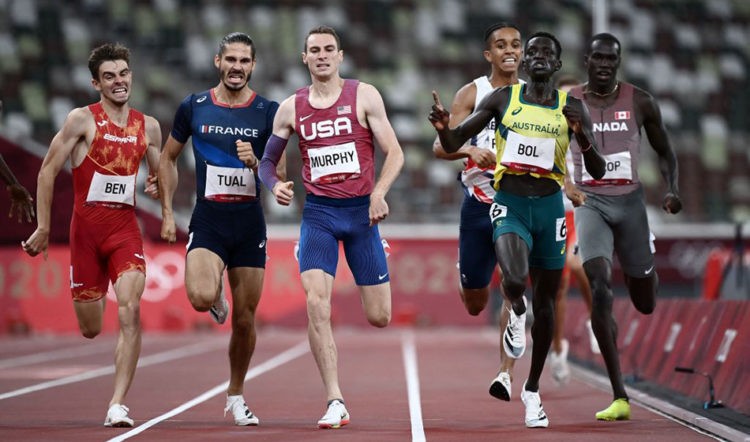 Dan Rowden, who had stayed well off the pace back in sixth at 600m, looked like he had more there but just couldn’t find the gaps that Murphy did and finished a close fifth in 1:44.35, which ultimately left him just 0.05 from making the final as a fastest loser.

In the final semi, no-one looked interested in taking the pace and so Elliot Giles moved to the front. The Briton was ahead at 400m in a controlled 51.43 and he kept the pressure on to lead through 600m in 1:17.33 which was 1:43 pace.

Following him closely was double world medallist Amel Tuka, who has been way off form in 2021 with an average of seventh in last five races.

On the last bend Ferguson Rotich, who had run the fastest Olympic qualifier in history the day before, sped by on the outside to move into a challenging position just as world leader and 2012 Olympic silver medallist Nijel Amos was looking to extricate himself from the pack and the Botswanan caught the heels of Isaiah Jewett, both falling heavily to the ground.

There was a big gap to fourth and Moroccan Oussama Nabil’s 1:46.42. Former world champion Pierre-Ambroise Bosse was also affected by the fall and he finished sixth in 1:48.62.

Jewett and Amos finally got to their feet and ambled across the line together in 2:38.12 and 2:38.49, although Amos was later added by officials to create a nine-man final on Wednesday night.

Giles said: “I ran a good race until the last 50 metres and then my legs fell off and I couldn’t hold it any more. It wasn’t meant to be.”