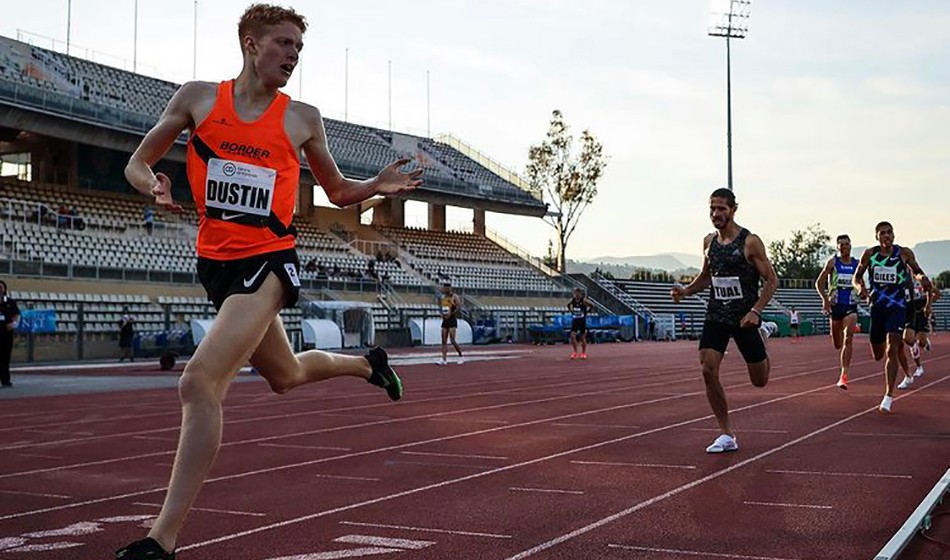 It was another hugely busy weekend of action throughout the world with sensational performances on the tracks of Europe and America with Britain’s Oliver Dustin creating one of the shock results of the year in Nice on Saturday.

To read about the Saucony BMC Grand Prix at Watford on June 12, click here

For news from the Ethiopian Trials in Hengelo on June 8 and Letsenbet Gidey’s world 10,000m record, click here

In the women’s 1500m there was an Olympic standard for German Hanna Klein with a 4:02.58 PB while Briton Revee Walcott-Nolan improved her best time to 4:06.28 in second.

In the men’s 1500m, Australian Jye Edwards set an Olympic qualifying 3:34.74 while Santiago Catrofe improved his Uruguay record to 3:35.82. British champion George Mills was seventh in 3:37.00.

Brno, Czech Republic, June 13
Scott Lincoln threw a big PB of 21.28m to set an Olympic shot standard and go third all-time in Britain though Andrei Toader’s next throw of a Romanian record 21.29m won the event by a centimetre.

She then contributed a superb 48.85 relay split as her Texas A&M team clocked a world-leading and collegiate record 3:22.34, a time that would have earned medals in both the last Olympics and World Championships.

Britain’s Nicole Yeargin ran 50.49 in the 4×400 to take USC into the lead on leg three before Mu regained the lead on leg four.
In the individual event, Yeargin gained an Olympic qualifier with her heat win PB of 50.96 and beat the Tokyo mark again in the final with her fourth place 51.02.

Canadian Camryn Rogers substantially improved in the hammer with a 75.52m throw as Tara Simpson-Sullivan was just 64 centimetres from a medal with her fourth place 68.78m for the best ever British result in the event.

Texas A&M's Athing Mu sets a collegiate record again with a time of 49.57 in the women's 400m 👏 @athiiing pic.twitter.com/rZaf8Eq9H0

For more about the NCAA women’s championships with detailed results click here in the AW Clubhouse.

Hammer Circle, Hull, June 13
Jessica Mayho improved her hammer PB to 67.84m which puts her sixth all-time in Britain while Nick Percy had discus wins in two competitions with 62.80m and 63.03m.

Geneva, Switzerland, June 12
Britain’s Emily Borthwick cleared a 1.93m PB in the high jump to defeat Morgan Lake’s 1.90m and that moved her to equal 10th all-time in the UK.

Lieke Klaver won the women’s 400m in a PB-equalling 50.98 while European indoor silver medallist Liemarvin Bonevacia won the men’s 400m in a European lead of 45.01 from Dutch team-mate Jochem Dobber (45.37) to underline their 4x400m credentials.

Their potential was underlined by the women’s individual race as Mujinga Kambundji won the 100m in 11.07 from Swiss team-mates Salome Kora (11.12 PB) and Ajla Del Ponte (11.18) with Dafne Schippers fourth in 11.25.

Marseille, France, June 9
Jemma Reekie was close to her PB with 1:58.41 as she won the 800m in a meeting record. In sixth, European junior champion Isabelle Boffey achieved a PB of 2:01.41.

There was a British win though in the women’s 100m for Daryll Neita who ran a sparkling meeting record of 11.08/-1.6 despite a strong headwind which would have surely seen a sub-11 had the wind been in the other direction.

Natalia Kaczmarek won the 400m in a meeting record of 51.16 while Laviai Nielsen set a season’s best of 51.42 though that was just outside the Olympic standard of 51.35.

Marietta, USA, June 11
World outdoor leader Katie Nageotte had a very near miss at 5.04m what would have been a world indoor record as the event was brought indoors due to thunderstorms. Her winning mark was 4.94m.

The women’s long jump was held outdoors and Lorraine Ugen jumped an Olympic qualifier of 6.94m/0.3 to top the UK rankings for 2021. It was her longest jump since 2018.

In fourth, after leading overnight by over 100 points, Holly Mills improved her PB to 6211 points to top the UK rankings and strengthen her hold on eighth place in the all-time UK rankings.

Ethan Cormon won the pole vault with a PB 5.75m ahead of Harry Coppell’s UK lead of 5.65m though the Briton gained some notable scalps with Piotr Lisek third and Renaud Lavillenie fourth.

Laura Zialor finished second in the high jump with a PB 1.90m.

In third, James Ellington set his fastest time of his comeback after his motorbike accident with 10.39 in third.

The clash with the BMC meeting in Watford meant there was just a single women competitor in both the senior women’s 1500m and 5000m.

Midlands Championships, Nuneaton, June 12-13
Craig Murch won the hammer with a season’s best 73.07m throw and only missed his PB by around half a metre.

Rory Dwyer won the high jump with a 2.15m leap on countback from Will Grimsey.

Some ducks stole the show in one of the sprint races, though, when they invaded the track just as a race was finishing.

Nia Wedderburn-Goodison won the under-20 200m in a wind-assisted 23.44 which but for the 2.5mps following wind would have put her in the under-17 all-time top 10 and easily been a European qualifier though at 16 years-old she is actually too young to compete in the Under-20 International event.

Consistent Nick Percy won the discus with his 15th competition over 60 metres this summer and he won by nearly 12 metres mwith a 62.60m throw which broke former UK record-holder Bill Tancred’s championship record set 48 years ago.

Turku, Finland, June 8-9
There was a Polish javelin record for Marcin Krukowski of 89.55m to go second in the world rankings to defeat Olympic champion Keshorn Walcott’s 82.84m.

Britain’s Naomi Ogbeta jumped a legal PB of 14.22/0.5 to strengthen her hold on third place in the UK all-time rankings and though it was just short of the Olympic standard, she currently lies 19th in the world lists for 2021.

There was a big British win though for David King who had a huge breakthrough to take the 110m hurdles in 13.37/0.1 and that moves him to 10th all-time among British hurdlers.

The men’s 800m was won by Kenyan Cornelius Tuwei in a stadium record 1:44.42 with Poland’s Mateusz Borkowski setting a PB 1:44.85 to make a late pass on fellow European indoor medallist Jamie Webb, who ran a season’s best and Olympic qualifier of 1:45.13.

Copenhagen, June 8
Lawrence Okoye got the first of his Olympic qualifiers with a 66.30m discus win.

Larking Gowen City of Norwich Half Marathon, June 13
Norman Shreeve won in 68:30 while sixth overall, as Natasha Cockram won the women’s race in 76:31.

Carlisle 5km, June 9
M65 Alastair Walker ran a time of 17:09 (17:11 by gun) and this time is over half a minute quicker than the British age-group best though there are doubts because of the required necessary officials that it can be ratified.