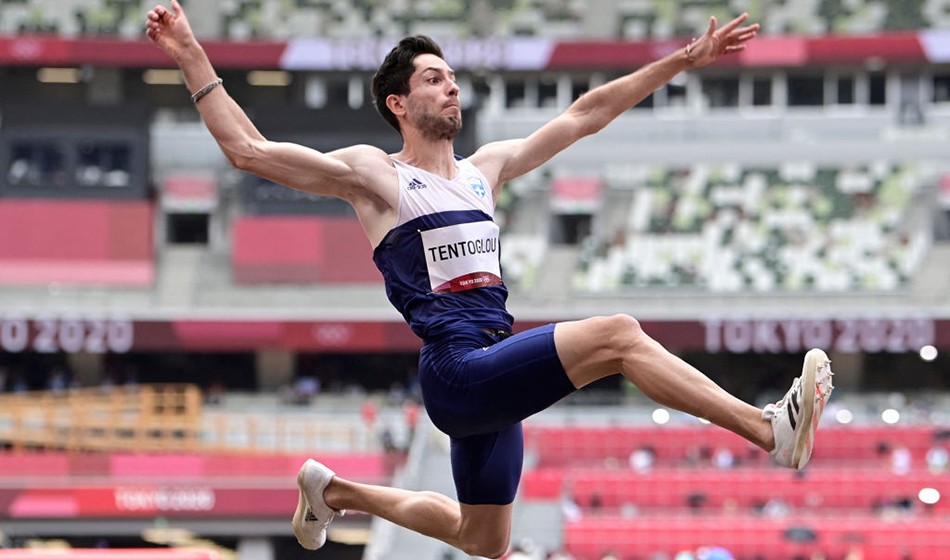 It was not the most exciting long jump contest for most of Monday morning as it appeared Cuba were sailing to an easy one-two. However, both of their athletes – world indoor champion Juan Miguel Echevarría and Maykel Masso – injured themselves in the competition and were denied in a stunning final round as Miltiádis Tentóglou snatched gold with what turned out to be the final jump of the competition.

It was Cuba’s former world youth and junior champion Masso who led the opening round with a 8.21/0.4 leap. World leader and European champion Tentóglou was second with 8.11/0.4 and Echevarría third with a solid 8.09m opener, with Swede Thobias Montler leaping 8.08m to lie a close fourth.

A clearly injured world champion Tajay Gayle no-jumped and paid no real part in the competition as he ended up 11th with 7.69m.

Little of note happened in the second round as Doha world finalist Eusebio Caceres of Spain jumped 8.09/0.1 to go third on countback while Tentóglou and Echevarría leapt further, but with no-jumps. Masso seemed to injure himself and took no further jumps.

The third round saw Echevarría finally get it right and he jumped 8.41/0.2 – a distance that has never failed to win an Olympic medal and would have been good enough to win gold at the last three Games. Crucially, he had 22 centimetres to spare on the board and the battle for top spot looked over.

JuVaughn Harrison, who had finished seventh in the previous night’s high jump, had started rustily with leaps of 7.57m, 7.70m and 7.96m in the first three rounds and the American moved into third with a 8.15/0.0 fifth round. He did not stay in that position for long, though, as Tentoglou matched that distance in the same round and his 8.15/0.1 moved him ahead of the American on countback.

In the final round Montler had a great jump in the vicinity of 8.40m but it was a no-jump by a centimetre. Next up was Caceres and his last jump was an excellent 8.18/-0.1 which moved him up to third briefly.

Tentóglou was next to jump and he responded brilliantly to losing his medal by sailing out to 8.41/0.1. That distance matched the Cuban leaders but importantly put him ahead on countback. He had two centimetres to spare on the board and his take-off speed was 41.2km per hour.

In theory there were still two jumps to go but Masso was injured and couldn’t make his attempt. Echevarria lined up and, surprised his lead had gone, had to take his final jump. Halfway through his run-up, however, it was clear his injury was too severe and he did not get as far as the take-off board. Greece had gold and Cuba silver and bronze.

It was Greece’s first medal of any sort in the long jump. Tentóglou stated it was his life ambition to win gold at Tokyo and he was encouraged to take up the sport by his first coach Vangelis Papanikos.

“I liked to try different things from a young age,” he said. “In addition to long jump I also did cycling, skateboarding and rollerblading before focusing on my sport.”

Nick Miller through to hammer final

Double world champion and world leader Paweł Fajdek, who had failed to make the Olympic final at both London and Rio, again suffered Olympic nerves and was well short of qualifying with his first two throws but an unconvincing final throw of 76.46m proved sufficient as ninth best.

Britain’s Taylor Campbell also struggled with a modest best of 71.34m and ended up just 28th out of the 31 throwers.

Miller, who spoke before the second group had thrown, said: “I really prefer to compete in the evening, so I found this morning hard, but I did what I needed to do. The second-round throw was a decent distance and what I needed on the board.

“Third in the qualifying group isn’t a bad place to finish but I know I have more to give. I have a couple of days now to recover and reset, ready ahead of Wednesday’s final.”

Campbell said: “I just didn’t make the right changes out there. I warmed up really well, then I just went into the competition and I just shut down a little bit too much. Didn’t commit to it the way I was in the warm up.

“I’ve got to mature in the event a little bit more, I’ve got to get familiar with throwing these distances, its too easy to throw a bit soft, but when you’re trying to throw fast your body just moves quicker and if you haven’t put enough tension down it you pay the price and that’s what happened today – I didn’t set it up properly and it was scrappy.

“I did well to get here but I just wish I could have competed and done the selection a bit of justice. I’ve got to go back to the drawing board and prep for the next three years. I’ve still got to qualify for the next champs, so I’ve got to focus now and improve that and do better in Paris.”