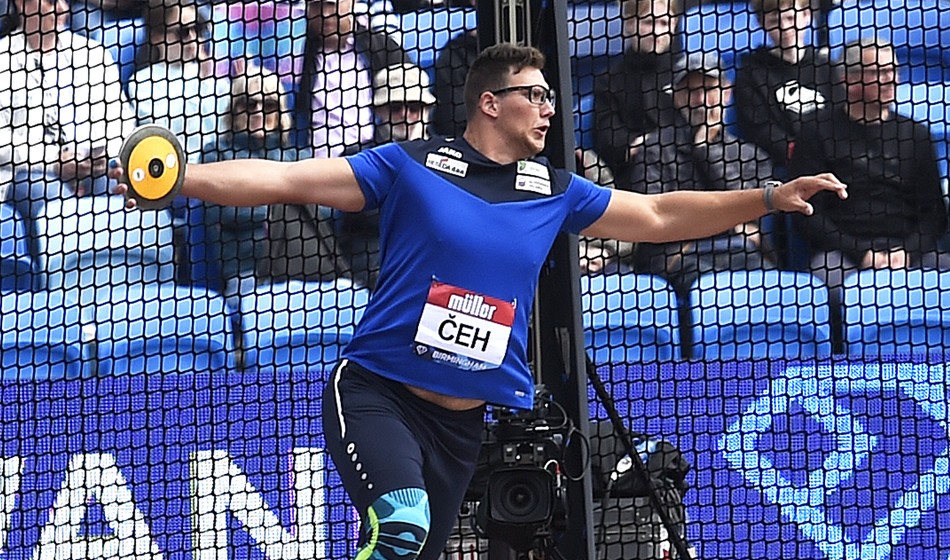 Kristjan Čeh was an unexpected star at the Müller Birmingham Diamond League as he threw a Slovenian, meeting and Diamond League record – not to mention a world lead – of 71.27m to win the men’s discus.

What’s more it meant the Slovenian rises to No.10 on the world all-time rankings. With such talent, is Jürgen Schult’s long-standing world record of 74.08m possible in future?

Čeh won the European under-23 title in 2019 and was fifth in the Olympic final last year but even he was surprised to win by so much.

“It was a little unexpected but a really good throw and it felt amazing,” he said. “In the warm-up I wasn’t in great shape as I missed all my throws and they all went to the left, but once the competition started it all came together. The conditions were great here.”

The bespectacled Čeh added: “This is my first goal of the season – to get a PB so now I need to raise the bar of my goals. I have a few more competitions, all the Diamond League plus some in Slovenia throughout the season but the World Champs are my focus.”

Matt Hudson-Smith has started this season in encouraging form and he won the 400m here in 45.32 ahead of US trio Bryce Deadmon, Kahmari Montgomery and Vernon Norwood. Significantly, Hudson-Smith is a member of the host club Birchfield Harriers, too, so will be keen to return to the stadium for the Commonwealth Games, in addition to defending his European title in Munich in August. 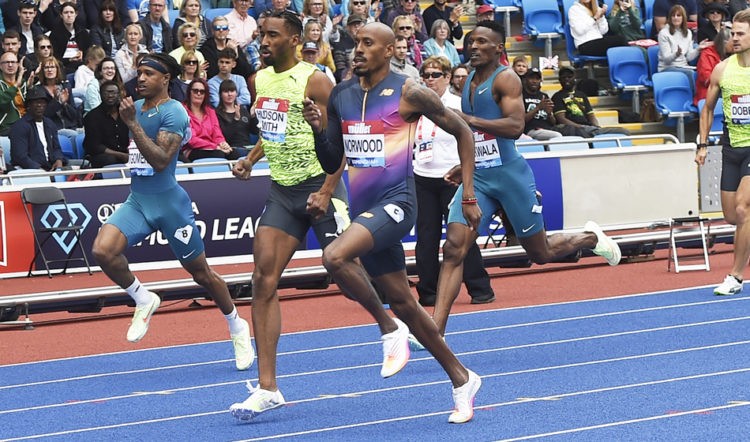 Who knows, could he also topple Iwan Thomas’s UK record of 44.36 later this summer as the mark celebrates its silver anniversary?

“It is my home town, my club, a new stadium and a home champs so I really want it to be my year. Everything is coming together so I am really happy,” said Hudson-Smith, who added that he’s more focused on medals than fast times.

“I want to do all three champs in both individual and relays. We are working hard as team and things are looking good. I can’t wait to be able to compete here at the Commonwealths in front of my family and friends.” 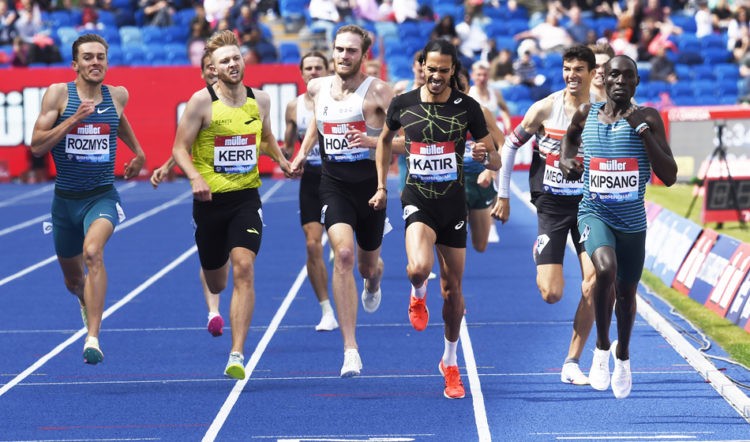 After his 3:31 at altitude in Kenya earlier this month and then victory in the Doha Diamond League last week, Abel Kipsang of Kenya was always the man to beat in the 1500m and so it proved as he eased to victory in 3:35.15.

Behind, Mohamed Katir of Spain ran 3:35.62, Olli Hoare of Australia was third in 3:35.76. Olympic bronze medallist Josh Kerr tried to weave his way through the traffic in the home straight but could only manage fifth in 3:35.92, as Emsley Carr Mile winner Matt Stonier ran a PB of 3:37.25 in eighth. Piers Copeland fared much worse, however, as he fell early in the race and broke a bone in his elbow.

Marco Arop, a Sudanese refugee who grew up in Egypt before settling in Canada, was a decisive winner of the 800m in 1:45.41. Making a strong move around the final bend, he quickly built a winning lead as Benjamin Robert of France, Bryce Hoppel of the United States and Jake Wightman finished second, third and fourth. With 1:46.39, Wightman won the battle of the Brits with Dan Rowden fading to eighth. 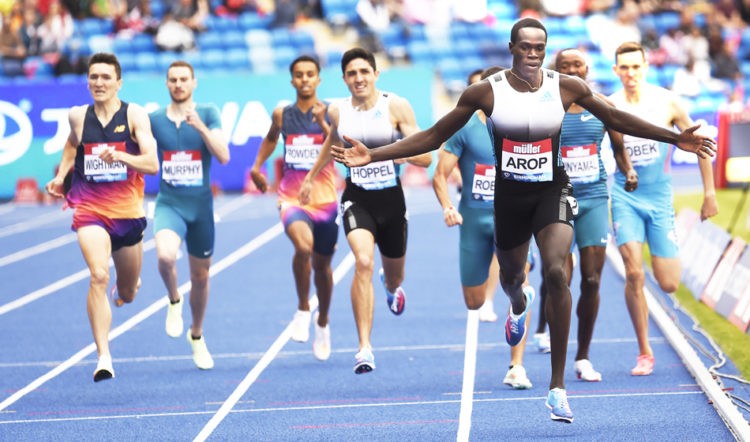 In one of the best races of the day, Thomas Young pipped GB team-mate Zac Shaw in the ambulant 100m with both athletes clocking 10.95 (0.7). “It was incredibly close out there but Thomas ran well again,” said Shaw, who added: “I have had an emotional week as my mum found out yesterday she was cancer free after a year of treatment. So I have found it hard competing with all this going on but today I could really be relaxed.”

Young added: “Winning is always nice but I’m just really happy to come here to this brand new fantastic stadium get the win. It’s amazing to have para-athletics at the Diamond League.” 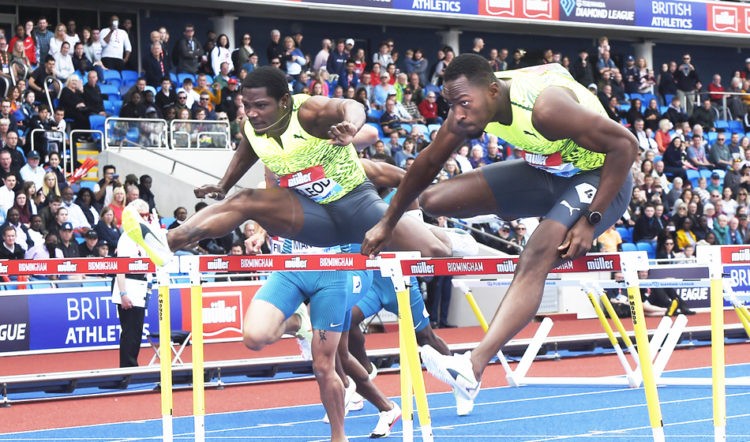 More clearcut was Ben Pattison’s win in the 800m B race. The former 400m runner has started the season in fine form and, following his win at the BMC Grand Prix in Birmingham last week, he scored another clear victory here in 1:49.21 after a slow first lap of 54.9. Jamie Webb and Kyle Langford were second and third but couldn’t match Pattison’s powerful finish.

“It was a huge domestic field so these are the boys I will be competing with for the Worlds, Commies and Europeans,” said Pattison, “so I thought it was important to go for the win. It wasn’t a quick race so it was good to test if I can use a change of pace and test my speed.”

An anticlimactic 100m was won by Aaron Brown of Canada in 10.13 (-0.2) from Yohan Blake of Jamaica with 10.20 with Jereem Blake and Andre de Grasse, also of Canada, third and fourth followed by the Brits Nethaneel Mitchell-Blake, Adam Gemili and Reece Prescod.

There was disappointment for spectators, though, when firstly Trayvon Bromell of the United States and then Brit Zharnel Hughes were disqualified for false starts. In the recent ITV show The Games, celebrity athletes were allowed to false start but Diamond League athletes were afforded no such luxury.

Django Lovett of Canada beat Olympic champion Gianmarco Tamberi of Italy in the high jump with 2.28m to 2.25m but Tamberi reflected: “The conditions are totally different compared to Doha, going from 35C to 17C today, but I’m just going to keep working.” 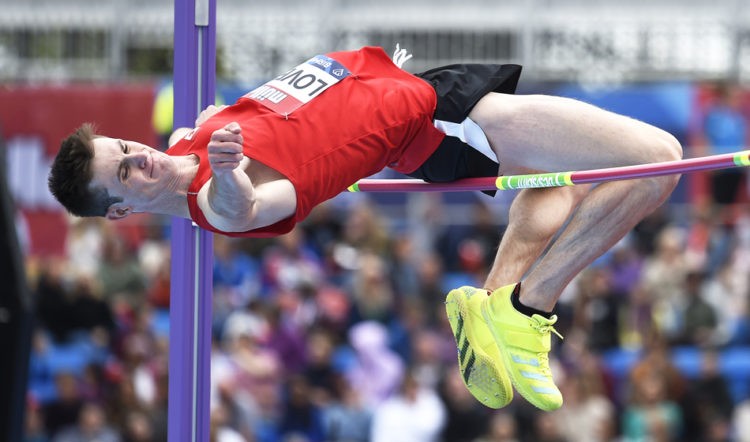 Also in the pre-Diamond League programme, Will Battershill outkicked Dan Jarvis to win a Brits-only 3000m steeplechase in a PB of 8:36.56.

The GB senior team was not as successful, however, as they dropped the baton on the final exchange between Richard Kilty and Zharnel Hughes and the win went to Canada in 38.31.