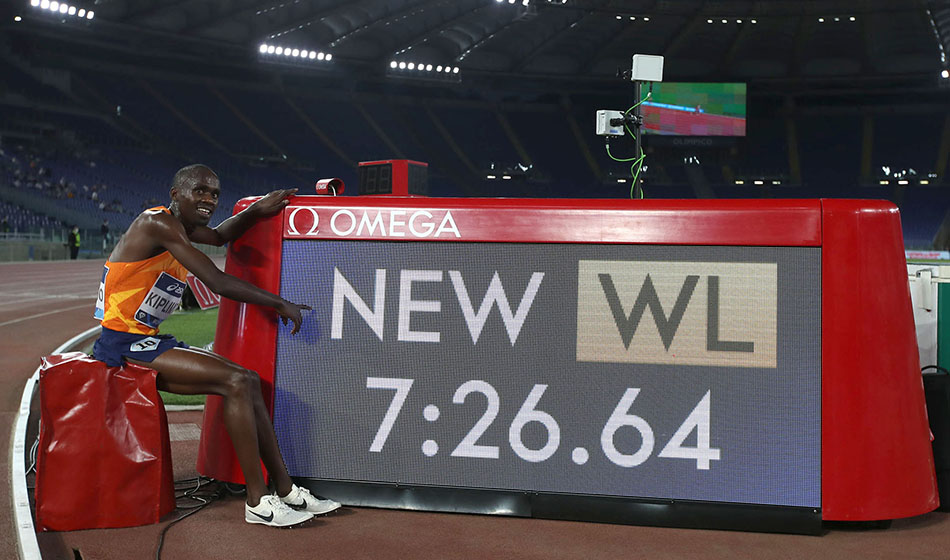 The much-anticipated men’s 3000m in Rome did not disappoint as Jacob Kiplimo of Uganda out-kicked Jakob Ingebrigtsen of Norway in 7:26.64 and 7:27.05 to go No.8 and No.9 on the world all-time rankings.

Such was the quality of this race on Thursday (September 17) in the Italian capital, Stewy McSweyn smashed Craig Mottram’s Oceania record of 7:32.19 with 7:28.03 and wound up third.

Amazingly Kiplimo and Ingebrigtsen are still teenagers, too, as they stormed to national records – although the former turns 20 in November and the latter hits 20 later month.

The field owe thanks to plucky pacemaker Sean Tobin. The Irishman has been in fine form lately and here he led the runners through the first mile in 3:59.6 before peeling off with just over three laps to go.

McSweyn, who enjoyed an emphatic 1500m win in Zagreb two days earlier, then took the lead and toed Ingebrigtsen and Kiplimo through 2000m in 4:59.

The relentless sub-four-minute mile pace continued, too, as Ingebrigtsen took control just before the bell with Kiplimo stalking him ominously.

Winding up the pace, Ingebrigtsen looked strong coming into the home straight but Kiplimo, who had run 12:48 to win over 5000m in Ostrava the previous week, unleashed a withering kick with 60m to go to ease his way past the battling Norwegian.

The only runners who have gone quicker at 3000m now are Daniel Komen with the world record of 7:20.67, Hicham El Guerrouj, Ali Saidi-Sief, Haile Gebrselassie, Noureddine Morceli, Kenenisa Bekele and Mohammed Mourhit.

The latter holds the European record after running 7:26.62 while representing Belgium, but some will now consider Ingebrigtsen the real record-holder due to Mourhit’s career being blighted by a drugs ban for taking EPO.

“I am over the moon,” said Kiplimo. “I did not expect such a great time, I thought that I could run around 7:30. The pacemaker was fantastic.”

There were also wins for Britain’s Jemma Reekie and Andrew Pozzi and you can read more about their performances here.