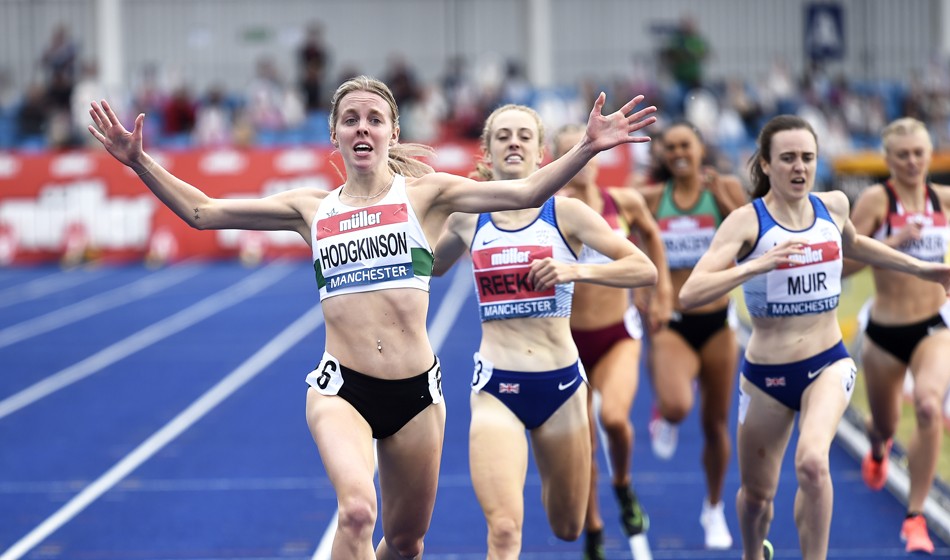 The standout women’s track performance of day three of the Müller British Championships came from teenager Keely Hodgkinson as she won a loaded women’s 800m.

Laura Muir challenged her training partner along the backstraight and was driving hard through 600m in 1:30.64 – the third 200m covered in 28.87)  but Reekie and European Indoor champion Hodgkinson looked to be comfortably covering the European 1500m champion’s blazing pace.

In the straight, Reekie edged by Muir but Hodgkinson powered past the pair of them and won quite comfortably in 1:59.61. That time meant her last 400m was inside 57.84 and that, for three-quarters of the race she was operating around world record pace.

The local athlete was delighted to seal her selection. “I stayed calm and executed my race plan as I wanted,” she said. “The middle distances are crazy at the moment – there must be something in the water. It’s great for the sport and fun to be part of but also awful.

“I really wanted to stay in there as I couldn’t afford to give anyone a space, let alone a metre. I hadn’t realised that last lap was so fast but I am sure my coach will be pleased. Every athlete’s aim is to make the final and mine will be the same going into Tokyo but it will be a challenge with the calibre of the athletes.”

Another athlete who can relax tonight is Tiffany Porter, who easily won the 100m hurdles in a stadium record 12.78 into a 1.0m/sec headwind.

For once, the European Indoor bronze medallist got the better of her younger sister Cindy Sember, who had an off-day and only finished third in 13.20 behind Alicia Barrett’s season’s best of 13.18. Having shown world-class form all season, however, she is certain to get the selectors’ approval.

Porter, who won her sixth title, said: “I’m feeling confident and excited and grateful for this opportunity. It was a good race for me and I have been working on my technique.” 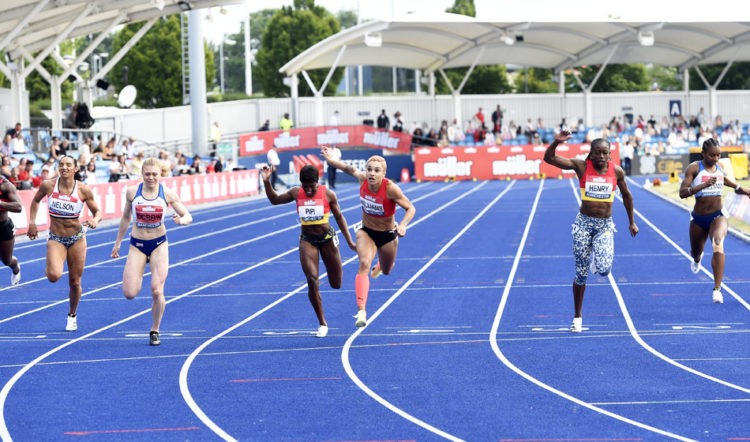 Newly-crowned 400m champion Jodie Williams, who had previously won this title in 2014 and 2019, took over from her sister Hannah as champion as she completed a stunning double meaning the Williams sisters have won it three years in a row. The stiff headwind of 2.9m/sec spoiled the times but Williams looked very strong as she won in a stadium record 23.02, with Beth Dobbin also confirming an Olympic spot alongside world champion Dina Asher-Smith, who will surely get the selectors’ third place.

The Scot finished fast as usual and ran 23.07, with Desiree Henry running a fine season’s best of 23.18 to deny another doubling athlete, Ama Pipi, who finished a close fourth in 23.19.

Williams said: “I’m at a stage in my career now where I’ve experienced the ups and downs of the sport. I’m a mature athlete in the sport now and I can’t be going into championships now thinking that I can’t win a medal. I’m feeling so confident and proving to myself that I can win again.

“It’s been my dream to be on a 4x400m relay team with my sister [Hannah]. We’re going to experience it and I can’t wait. She’s proved it to herself and it’s individual sport so we rarely share these moments. ”

Post-race she said: “I am so tired now; that was the hardest I have worked for a while. I think at the 10 [10,000m] I was running just on euphoria but today I was so tired. The girls made it a really hard race.

“I have never made the Olympics before so to do it in two events is amazing. I will have to leave my dad (Judd’s coach) to sort out all the logistics. ”

Markovc finished strongly and though her time was 0.54 short of the required standard she did pass Verity Ockenden, who does have the time but here missed out on the automatic second spot. The absent Eilish McColgan and the injured Laura Weightman also have the time and will add to the selectors’ conundrum.

A competitive 400m wheelchair race saw multi paralympic champion Hannah Cockroft just get by in the last few metres to win in 56.43 from Sammi Kinghorn’s 56.60. Melanie Woods (59.99) was third.