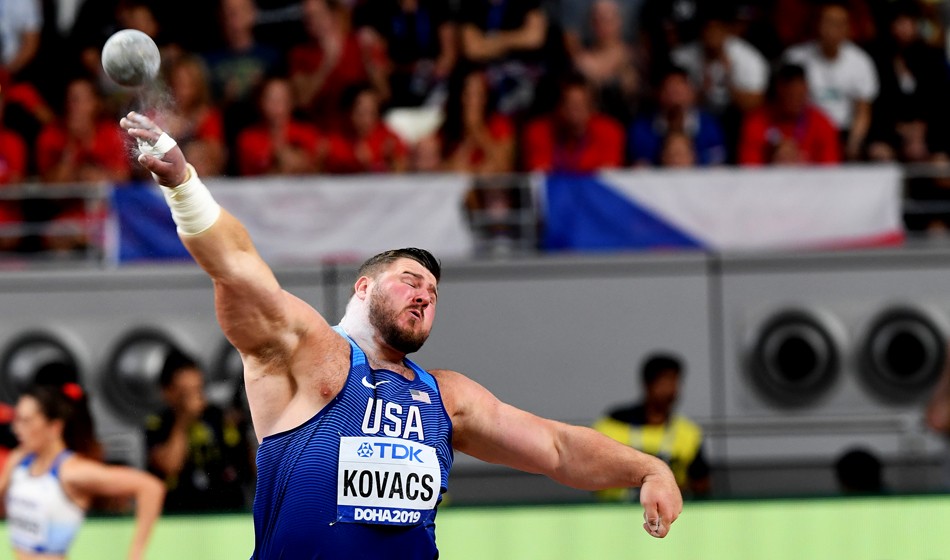 It was the most sensational and exciting and best quality shot contest in history.

Poor Darlan Romani threw 30 centimetres further than the previous championships record with a 22.53m throw and was not even close to the three medallists!

Olympic champion Ryan Crouser was first to break the championships record of 22.23m by Werner Gunthor way back in 1987 when he opened with a 22.36m but that did not even last the round as defending champion produced a stunning 22.90m to seemingly end the contest.

It was the longest throw since 1990 and moved him to fourth on the world all-time rankings.

Romani moved Crouser down to third with his 22.53m and Crouser’s third round response was another 22.36m but then the American moved back up to second with a 22.71m.

At this stage the 2015 world champion Joe Kovacs was having a solid series but was not a contender after throws of 20.90m, 21.63m, 21.24m, 21.95m, 21.94m but then incredibly with his last throw he launched the shot to 22.91m, a near metre improvement on his previous throws in this competition and nearly half a metre up on his PB.

Not only was it a championship record by all of a centimetre it moved him to equal third all time and dropped Walsh to fifth.

That was not the end though as Crouser had an amazing response and with a big roar his throw was sensationally measured as 22.90m to fall a centimetre short of Kovacs but level with Walsh but ahead on count-back.

Walsh had one chance of a comeback with the very last throw of the competition but despite it being another huge throw he could not remain in the circle and it was his fifth successive no throw. A few minutes earlier he was seemingly a stunning gold medallist and now he was having to settle for bronze.

Darrell Hill made it three Americans in the top five with a 21.65m throw.

Kovacs said: “It’s time to celebrate. I was hoping for a PB and then I saw Ryan and the others throwing far. I cannot be happier to win the gold medal. This is definitely the final which made history.”

Crouser said: “It was an unbelievable competition with fireworks in round six and I am happy to be part of. I wanted gold but to see Joe throw a PB with the last throw I can’t complain. A throw of 22.90m is unbelievable for me but I would not have thrown 22.90m if Joe had not thrown 22.91m.”

In the men’s javelin qualifying round Johannes Vetter led the athletes with 89.35m but his big-name German team-mates Thomas Rohler and Andreas Hofmann surprisingly were eliminated with underpar marks.

In women’s long jump qualifying, British champion Abigail Irozuru (6.70m) and compatriot Shara Proctor (6.63m) made their way through to the final in sixth and eighth respectively. Jazmin Sawyers did not manage to progress, however, after a best jump  of 6.46m saw her finish 19th while American defending champion Britney Reese also exited after coming outside of the top 12 with a best of 6.52m.