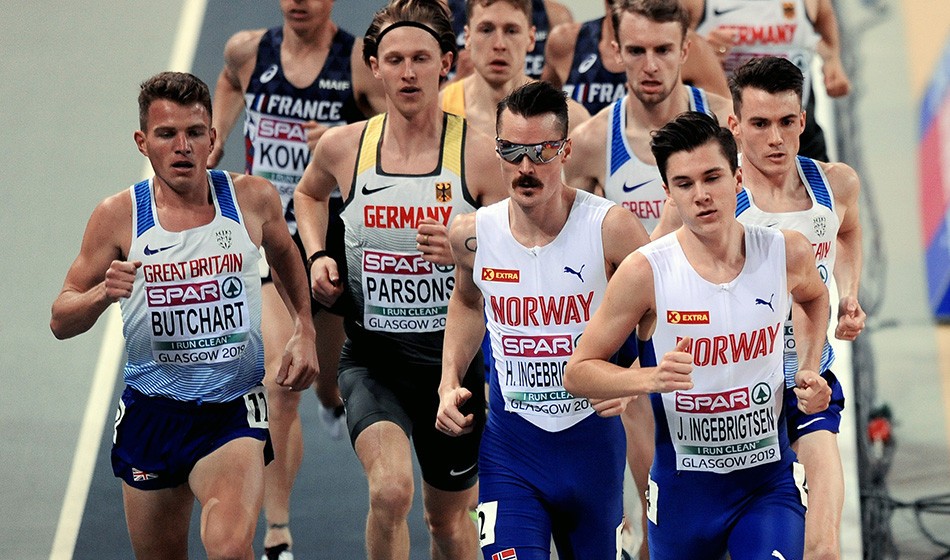 As with Laura Muir on opening night, Jakob Ingebrigtsen stamped his mark on the European Indoor Championships by winning the 3000m on day two to complete the first leg of a double gold medal bid in Glasgow.

The teenager, who is also targeting 1500m success, continues to sweep all before him in continental competition and added his first indoor title to the outdoor 1500m and 5000m European crowns he won so famously last summer in Berlin.

At 18 years and 163 days old, he not only became the youngest ever male athlete to win a European indoor title but also landed Norway’s first ever gold medal in the history of these championships.

The winning time was 7:56.15 but he was followed home by a tremendous performance from British indoor champion Chris O’Hare, who rode the wave of home support with a closing surge which helped him take silver just ahead of Jakob’s elder brother Henrik, who had thrown himself at the line in a vain attempt at overtaking the Scot. Both second and third-placed athletes were clocked at 7:57.19.

Jakob had been at or near the front of the field for much of the race and, after going through 1000m in 2:48.84 and 2000m in 5:32.02, he began to push the pace. Henrik went with him and, while the identity of the winner became clear, O’Hare simply wouldn’t be shaken off.

“It wasn’t easy,” said Jakob. “It was a really good competition with good athletes and I’m glad to be on the podium. Some other races started with a high pace and this wasn’t like that. I think the others had respect for us and they handed it to us so that we could make it our race. I am 16 minutes past my bedtime, but it’s an amazing day.”

The moment was also very sweet for O’Hare, who admitted he had seriously considered ending his athletics career after finishing ninth in the 1500m at last summer’s European Championships.

“With Jakob in races now it feels like there’s only two medals left,” said the 28-year-old whose last major medal came when he won 1500m European indoor bronze back in 2015. “The guy is incredible so I am happy to split up the Ingebritsens and it is good just to be back on the medal podium. It has been four years if not more since I have been on a podium and it has been a hell of a four years. I wouldn’t change it, it has made me the person I am. And hopefully this is another step forward.”

“It is definitely one of the sweetest medals of my career. It is good to get back on the medal stand and be rewarded for four years of hard work.

“After the European outdoors last year I was in a pretty dark place but if it wasn’t for my wife, my son, my parents, my siblings and my support team I would have given up for sure. I sat on a wall in Berlin with my mum and my dad and it was like ‘this is too hard, it is not worth it any more’. I had been gone from this point for three months away from my wife and son and I just thought ‘it isn’t worth it’.

Less than half an hour after Ingebrigtsen’s 3000m win, Norway took another gold as Karsten Warholm blasted to an emphatic victory in the men’s 400m.The 23-year-old equalled Thomas Schonlebe’s European record of 45.05 as he streaked away from Oscar Husillos to take the title. Michael Johnson’s UK all-comers’ record of 45.14 from 1993 also fell.

Remarkably, Warholm is merely trying to work on some mid-winter speed ahead of tackling his main event, the 400m hurdles, later this year.

What’s more, the Norwegian only made a late decision to race in Glasgow a few days before the championships began.

There was a painful end to Guy Learmonth’s championships after he crashed out during the second of the men’s 800m semi-finals.

The British captain, who had fallen and broken a finger in Birmingham recently, was ultimately disqualified, having clashed with Mark English when he tried to move wide and fallen heavily, while the Irish athlete lost momentum and was never able to recover. English was advanced to the final after review.

As the race unfolded, Jamie Webb ran aggressively in the last two laps and was pipped on the line by Mariano Garcia, who won in 1:48.84 from Webb’s 1:48.85. Andrea Kramer was third in 1:49.06 to take the last qualifying spot.

“I knew there was a gap on the inside, it was slow through 400m and then we wound it up a bit. I saw the gap, I believe I got through but I think I got nudged either from behind or inside from me and went down,” said Learmonth.

“The guy moved into the outside lane and I just went for it. I don’t know whether it’s my fault or someone else’s fault but it isn’t meant to be.”

There will be two British athletes in Sunday’s final of the women’s 800m. The 2017 European indoor silver medallist Shelayna Oskan-Clarke looked comfortable as she came second in the second semi-final in a time of 2:03.11 behind France’s Renelle Lamote (2:02.94).

In the opening race, Mari Smith’s strong finish did just enough to make sure of her qualification as she came third in 2:02.93 during a race won by Spain’s Esther Guerrero (2:02.43). Adelle Tracey’s fifth-place finish in 2:03.26 meant she does not progress.

“I don’t think it has sunk in yet,” said Smith. “It played out exactly how I’d dreamed – I just stayed with them long enough to show my strength in the last 200m.”