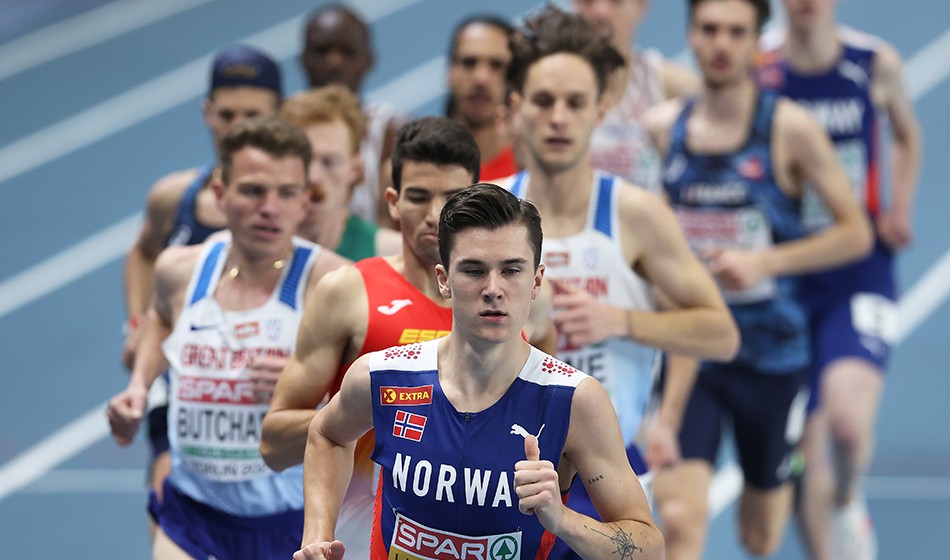 Despite the likes of Marc Scott withdrawing on the eve of the European Indoor Championships and Marcel Lewandowski pulling out after the 1500m, the quality of the field was shown when Mike Foppen ran 7:49.99 and did not even make the final.

Though Jakob Ingebrigtsen said he was majoring on the 1500m and his indoor PB only ranked him 10th fastest out of the 12 finalists, he was an overwhelming favourite and it seemed impossible he would not defend his title unless he incurred the wrath of the judges as he initially did in the 1500m.

Seemingly playing safe, he went to the front, jogging through the first 400m in 64.69, but giving way at 600m as the leaders kept the same sluggish pace going through 1000m in 2:44.27 and halfway in 4:08.00, pretty much ensuring the race would be more of a 1500m rather than a 3000m. However this suited one man more than any other, although he had now managed to get himself boxed on the inside as he had in the shorter race on Friday night.

Despite this nothing happened up front as Hugo Hay reached 2000m in 5:26.35 but in the final kilometre the Norwegian powered to the front and began making it a proper race.

The next lap took just 28.47 and he kept the pressure up with a 28.89, 29.20 and then even faster on the penultimate lap with a 28.19 and now only three runners were still in contact – European leader Mohamed Katir of Spain, Belgian Isaac Kimeli and former winner Adel Mechaal of Spain.

Ingebrigtsen seemed to hold back along the final backstraight but then finally stretched out and kicked on the last bend as he completed the final lap in 26.39 for a PB 7:48.20, to easily open up a 10-metre gap though it should be noted he has run 20 seconds faster outdoors.

The winner said: “This means a lot to me. My goal was to improve my performance from two years ago and that meant getting two golds. I ran according to my plan and I am surprised my opponents let me do my own thing without interrupting me.”

Kimeli (7:49.41), who had Covid last year, had his greatest run to date to give the highly successful Belgium team another medal just ahead of Mechaal (7:49.47).

A number of good 3000m runners found themselves down the field as they failed to make it a true test of the distance. You would have to include Andy Butchart, who headed qualifiers on time, amongst those runners.

The Briton ran his last kilometre in a fine 2:25.99 but off a slow pace it made little impression on the better 1500m runners and, with his 7:52.15, he finished seventh just ahead of another endurance-based runner Jimmy Gressier (7:52.43).