There were commanding wins for athletes at very different stages of their careers as Hellen Obiri and Jacob Kiplimo both enjoyed a victorious day at the Simplyhealth Great Manchester Run.

For the 29-year-old Obiri, who is planning a full-time switch to road racing after next year’s Olympics and admitted to AW that she is hoping to target a track distance double of 5000m and 10,000m at the IAAF World Championships in Doha later this year, there was a healthy winning margin of 21 seconds as she hit the line in 31:23. Behind her Ethiopia’s Ruti Aga clocked 31:44 for second while two-time world marathon champion Edna Kiplagat was third in 32:34.

The reigning 5000m world champion Obiri has known nothing but success this year, having won the Kenyan Cross Country Championships, the world cross country title and then storming to 3000m victory at the recent Doha Diamond League.

With confidence levels clearly high, she set about pushing the pace after she and Tokyo marathon winner Aga, who had separated themselves from the chasing pack, had gone through the 5km mark in 15:56. It was a lead she would not relinquish.

“I’m a big fan of Manchester United so I really enjoyed running this race,” she said. “I knew I was in good form – winning the World Cross and a Diamond League – so I tried my best to be at the level I want to be.” 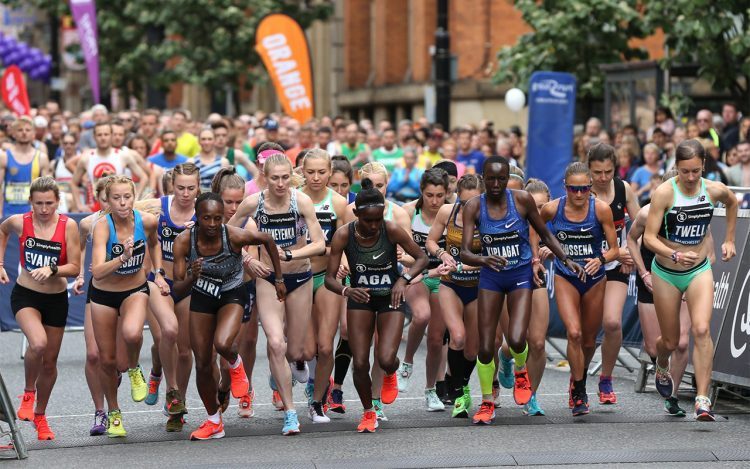 Just behind the top three came Steph Twell, another athlete who has enjoyed her own successes on and off-road this year. The Scottish cross country champion, who also won the recent Brighton 10km, just managed to hold off Ireland’s Fionnuala McCormack, clocking 32:41 to take fourth by two seconds.

Even though he may be tender in years, world cross country silver medallist Kiplimo was an utterly dominant force and looked in complete control throughout his impressive performance. He was joined in pushing the pace in the early stages by Britain’s in-form Nick Goolab but when the African reached halfway in 13:45 he held a 25-second advantage over his competitors which only grew in the closing stages.

The 18-year-old now looks likely to set his sights on the 10,000m in Doha and it will be intriguing to see how this young talent develops over the coming months.

Goolab has been impressive in recent weeks, clocking a course record 28:22 over 10km at Brighton and an excellent 13:34 for 5km in Ipswich. Here, he was only three seconds off third place thanks to a run of 28:42 – though he admitted afterwards that he had paid dearly for his early attempts to stick with Kiplimo.

Emile Cairess was next Briton over the line in sixth thanks a personal best of 29:08, with Southampton’s Alex Teuten eighth in 29:37 and Bristol athlete Daniel Studley two seconds behind in ninth.

In the elite wheelchair races, there was an emotional win for Johnboy Smith, who dedicated his victory to former Great North Run winner Mark Telford, who passed away in the lead-up to the event.

The Commonwealth T54 marathon silver medallist won a tight battle with Simon Lawson, finishing first by only a second in 22:11, with Spaniard Rafael Botello Jimenez a distant third in 22:49.

Three-time Paralympic medallist Shelly Woods marked her return to racing with victory in the women’s race as she clocked 25:40. Liz McTiernan followed in 36:15, with Helen Gilham (41:38) third.

The first winners of the day came in the half-marathon which is also staged as part of this festival of running. Salford Harriers’ Carl Hardman, who clocked 2:19:35 two years ago at the Berlin Marathon, was a convincing winner as he clocked 69:18 for victory ahead of Boalloy’s Carl Moulton (71:53) and last year’s winner Craig Pilsbury (72:22).

The women’s race was won by Belgrave Harrier Georgie Fenn in 81:16 from Germany’s Meike Freudenreich (82:02) and Emily Jeanes of Trent Park(85:06).