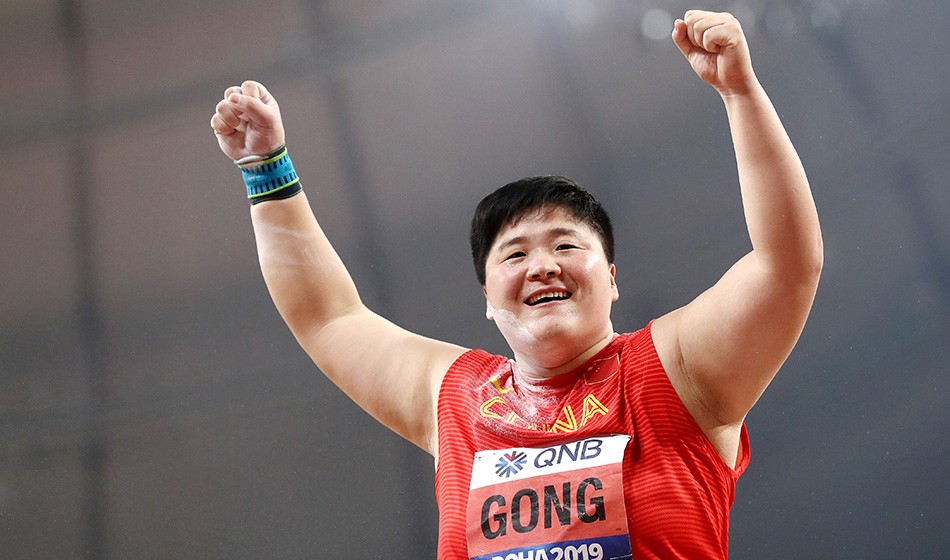 Gong Lijiao successfully defended her women’s shot title in Doha. The 30-year-old beat Danniel Thomas-Dodd by just 8cm with 19.55m but felt she could have won by more if she had not used so much energy warming up.

“I am very excited about tonight and to win the world title and I’m happy,” said Gong. “But I’m not satisfied with my result. I think maybe it is due to during the warm-up I did a lot of throws and it was very hot. I didn’t feel as powerful tonight.”

Thomas-Dodd also thought she could have thrown further than her 19.47m best effort which came in the sixth round. “The competition was really good,” said the Jamaican.

“All the ladies had the ability to get on the podium and for me to get a silver is a real accomplishment for me. But I definitely think I could have gone further if I’d used a different technique earlier.”

Christina Schwanitz, the 2015 world champion, is returning to form after having twins in 2017 and said: “I’m happy. It was a great competition for me.”

When asked about the Olympics next year, the German said: “Up until today I’ve only thought about the last few weeks. The Olympics will be a great competition but it’s so far away! But my twins will spend more time in kindergarten next year so I’ll have more time to train and with more training I can throw far.”

With an 18.61m PB in qualifying, Sophie McKinna became the first Briton to make the world final since 1983 when Venissa Head and Judy Oakes placed 10th and 12th. In the final she threw 17.99m and admitted she found it hard to lift herself for the final after the euphoria of her qualifying performance 24 hours earlier.

Sophie McKinna reflects on Doha 2019 and tells @Jason_AW she found it hard to raise her game for the shot put final after her big throw in qualifying. #WorldAthleticsChampionships pic.twitter.com/xQn0k9YsCc

While the jumps standards in Doha have been exceptional, mediocrity reigned in triple jump qualifying, with only five athletes making the 14.30m standard and four of those five only doing so by two or less centimetres.

On paper it looks as if the final will be closely contested though as just 30cm covered the leading 12 with Jamaican Shanieka Ricketts leading the way with a 14.42m jump as 14.12m got the last spot among the top dozen.

The two big favourites – Olympic champion Caterine Ibarguen and world champion Yulimar Rojas – jumped a remarkably similar 14.32m and 14.31m and both will be aiming to jump around a metre further in Saturday’s final.

The men’s shot qualifying was a higher standard and 12 athletes reached the necessary 20.90m, but it looked as though it would be more when eight achieved it in the first group. Tom Walsh showed he has an excellent chance of successfully defending his world title with a 21.92m throw to head qualifying. Pan American champion Darlan Romani threw 21.69m and Olympic champion Ryan Crouser 21.67m.