Gold for Isabelle Boffey in European U23 Champs 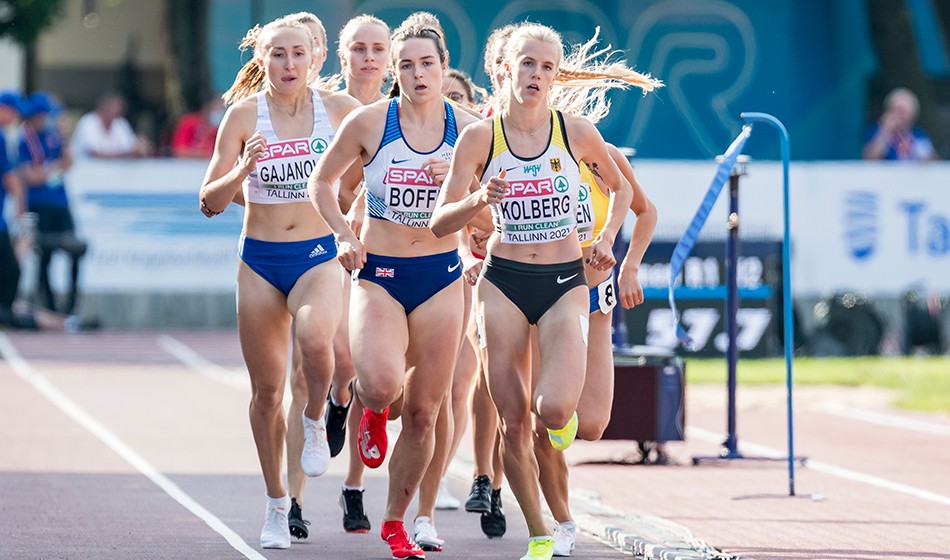 On the third day of competition at the European Under-23 Championships at Tallinn on Saturday (July 10) where Britain had lots of hopes, only dependable and steely racer Isabelle Boffey won a medal as the UK otherwise picked up a number of frustrating fourth and fifths.

She opened up a gap around the bend and despite losing a little ground in the finishing straight, she held on to win in by a few metres in 2:01.80.

Eloisa Coiro was a fast-finishing second in a PB of 2:02.07 with Sweden’s Wilma Nielsen third in a PB 2:02.29. Former European under-20 champion Khahisa Mhlanga finished strongly for fourth spot in 2:04.05.

A delighted Boffey said: “I am buzzing. I showed that as I crossed the line. I have run 2:01 a few times this season and I really wanted to bring my best to the champs. I tried to stick to my plan, and I knew if I did that, I could secure the gold.

“I now want to get into some quick races to get these times down and get a time for next season’s championships. The middle distances in the UK just now is insane and I just need to train hard to get on their level next year.”

Mills ran a 53sec last lap but didn’t make any impression on the medallists. European under-20 medallist Lay was well placed at the bell in 2:46.74 and was still fourth as he hit the finishing straight though lost four places in the last 100 metres.

The 110m hurdles also looked promising but again Britain narrowly fell short in an exciting race which saw the first four finish within a metre.

Ojora, who looked to be sharing the lead at halfway, said: “My start was good but towards the end I really started worrying about people each side of me instead of focusing on my own race which is upsetting. I didn’t come here for fourth, but I’ll be back.”

Alessandro Sibilio, who won a European junior silver medal in 2017, won a high quality 400m hurdles in a big PB and Italian under-23 record of 48.42 and the next four also set PBs too.

Emil Nana Kwame Agyekum of Germany was second in 48.96 with Netherlands’ Angela Ramsay third in 49.07. Britain’s Alex Knibbs improved his PB to 49.37 in fourth and British senior champion Alastair Chalmers did set a season’s best of 49.84 in sixth.

The quality was matched in the women’s race as the first five set national under-23 records. Emma Zapletalová also set a Slovakian senior record and broke the championships record as she won easily in 54.28 to destroy her year-old PB of 55.19. Sara Gallego set a Spanish senior record in second with 55.20 just ahead of Switzerland’s Yasmin Giger’s 55.25.

Switzerland did even better in the men’s race as Ricky Petrucciani, who has qualified for the Olympics by the world ranking system, won in a championships record 45.02 to easily beat his 45.69 PB set when winning the Swiss Championships. Belgium’s Jonathan Sacoor (45.17) and Italy’s Edoardo Scotti (45.68) took the other medals as he first six went insde 46 seconds.

Poland’s Pia Skrzyszowska went one better than she had in the 2019 European Junior Championships as she set a PB 12.77 to narrowly pip France’s Cyrena Samba-Mayela (12.80) with Poland picking up a further medal with Klaudia Wojtunik also setting a PB of 12.97. Britain’s Anastasia Davies finished eighth in 13.53.

The very hot weather of more than 30C certainly meant some quality performances in the shorter events though meant it was an ordeal for the endurance runners, who found their 5000m races split in two.

Magnusson is a student at Eastern Michigan in the United States but moved to live in England when he was five years old and is a member of Kingston Upon Hull AC.

Mortimer said: “Knowing there was another race I needed to take it on. I knew we needed to do sub-14. I was pleased Mohumed took it out, but I couldn’t handle it in the end.”

Kristjan Čeh predictably retained his discus title with three throws over 65 metres when the next best was Belarus’s Yauheni Bahutski’s 61.21m. The best of his throws – 67.48m in the third round – was a championship record for the 22 year-old who will be one of the favourites in Tokyo.

Another championships record went to an even bigger Olympic favourite as World Championships silver medallist and European Indoor champion Yaroslava Mahuchikh was again over two metres. None of the opposition could go higher than 1.89m as Sweden’s Maja Nilsson took silver on countback from Slovenia’s Lia Apostolovski.

On top of the podium once more! 🙌

France’s Ethan Cormant was a clear winner of the pole vault as he set an outdoor PB of 5.80m at the first attempt as Greece’s Emmanouíl Karalís (5.65m) and Norway’s Sondre Guttormsen (5.60m) completed the medallists.

Germany’s Samantha Borutta, a 71.08m thrower this summer, dominated the hammer with the five best throws of the competition with a best of 68.80m.

Denmark’s Katrine Koch Jacobsen (66.81m) and Finland’s Kiira Väänänen (65.98m) took the other medals.
Britain’s Anna Purchase had a good competition and was even in a medal position after a 65.11m second round throw and ended up fourth. At her best, British Trials winner Tara Simpson-Sullivan could have won a medal but finished fifth with a 64.84m throw.

A delighted Purchase said: “It has been a really hard year, so I am very proud today. I had to quarantine for 17 days after going to and fro from the US so to do this is really special.”

The Dutch are having a good championships and Jessica Schilder who was fifth in the European Indoor Championships, won the shot with a final round 18.11m throw which moved her up from third. Germany’s Lea Reidel had thrown a 17.86m PB earlier in the round to overtake the Dutch woman’s fifth round 17.85m which was until then second on countback to Sweden’s Axelina Johansson’s fourth round effort and the latter ended up being shunted to third.

Germany are dominating the decathlon after the first day. Andreas Bechmann has a big lead with a world-class 4447 points with his team-mate Nils Laserich (4221) and Netherlands’ Sven Roosen (4220) separated by just a point.