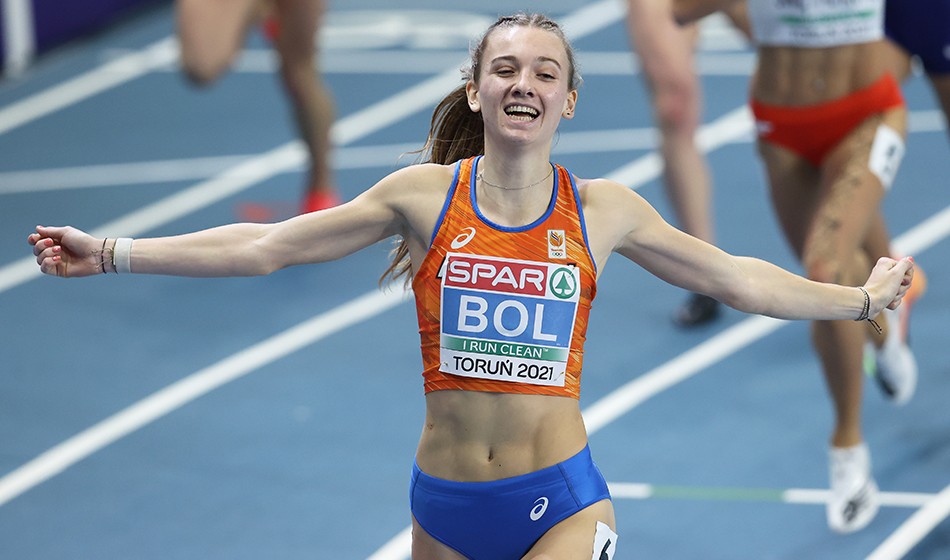 Femke Bol’s meteoric rise continues. The 21-year-old Dutch athlete looked effortless as she cruised to victory in 50.63. It is not even her specialist event either as she focuses on 400m hurdles outdoors.

“I was thinking ‘please, please, nobody come’. I was so tired,” she said on the closing stages after having passed team-mate Lieke Klaver down the backstraight on the final lap before then holding off the challenge of fast-finishing Polish runner Justyna Swiety-Ersetic.

“It all gives me a lot of confidence for the hurdles outdoors.”

Swiety-Ersetic took silver with 51.41 while Jodie Williams earned bronze for Britain with a 51.73 PB after a smartly-run race.

The GB captain led by example exactly 10 years since she last ran in the European Indoor Championships, on that occasion finishing fourth in the 60m.

“I proved to myself that I can get on to podiums again,” said Williams. “This champs was about overcoming those mental barriers again.

“Last time here I was fourth so it’s really positive now for me to win a medal here. It’s taught me how to fight again.” 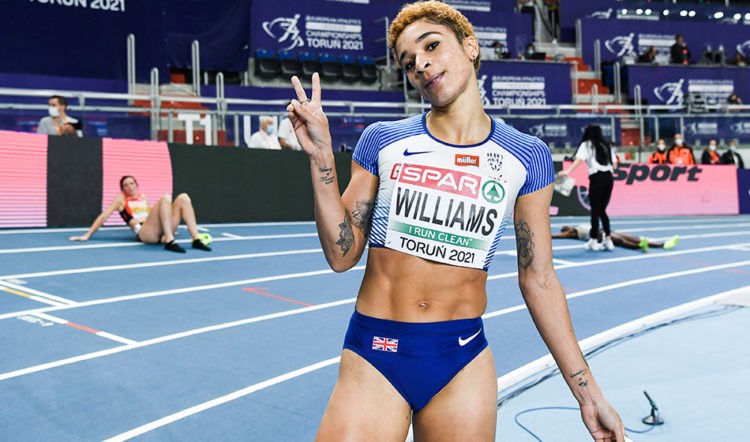 It will be exciting and interesting to see what Williams can do over 200m or 400m this summer. Bol, who is a former judo player, will also be tackling only her third season at 400m hurdles and she is set for some mouth-watering clashes against athletes like Dalilah Muhammad and Sydney McLaughlin of the United States at the Tokyo Olympics.

Elise Vanderelst won a painfully scrappy women’s 1500m final in a slow 4:18.44. The Belgian was fastest on paper going into the race and out-manoeuvred her rivals to take gold.

The 23-year-old finished ahead of Holly Archer but the Briton was initially disqualified for pushing and shoving along with Spain’s Agueda Munoz.

However, with shades of the previous evening’s men’s 1500m final, a British protest was successful and Archer was reinstated and awarded silver with 4:19.91 as her team-mate Katie Snowden finished sixth in 4:21.81.

The first 400m was passed in only 75.96 and 800m in a pedestrian 2:30.43. Archer was trapped on the inside near the back and struggled to extricate herself on the box.

Finally, after a tense first kilometre, Esther Guerrero of Spain cut loose but after blasting through the penultimate lap in 28.73 she began to die on the final lap as Vanderelst cooly strode past her.

Guerrero faded to fifth as Archer finished strongly for silver and Hanna Klein of Germany came through for bronze just ahead of another Spaniard, Marta Perez. 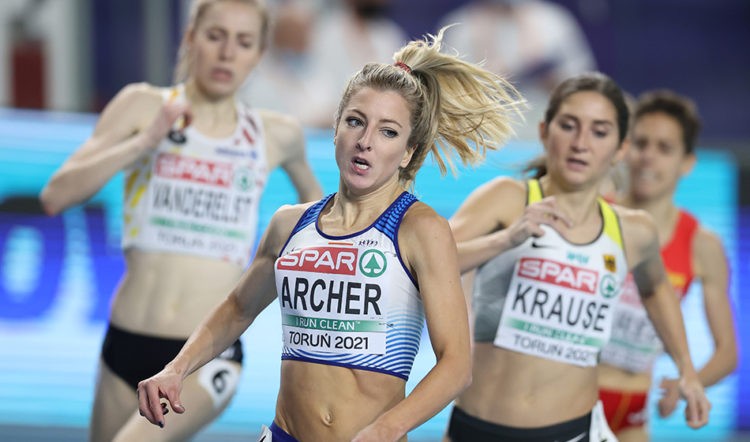 “That was the longest wait ever,” said Archer on the appeals process. “It was supposed to be half an hour but it turned into three hours. I feel absolutely delighted. To come so close and then get it taken away, I’ve been on a rollercoaster, but I’m really happy to finally get that silver.”

The 1500m runner-up added: “It was a total blur. From the gun, it was just jostling. The first 10m, arms and legs were going everywhere so I don’t really remember much.”

Keely Hodgkinson turned 19 this week but ran her 800m semi-final like a wily veteran. The Briton posted the fastest time, too, of 2:03.11 as team-mates Ellie Baker (2:03.29) and Issy Boffey (2:03.34) also made the final on Sunday after finishing runners up in their races.

“It’s amazing. It’s really exciting,” said Hodgkinson on the British success. “The girls really deserve it. Issy came through strong and Ellie held on at the end. To get three out of three through to the final when most people weren’t expecting it, is really good.”

Baker added: “It just shows how dominant our GB middle distance girls are. I’m so proud of them as well as myself. I can’t wait for us to put on a show for everyone in the final.”