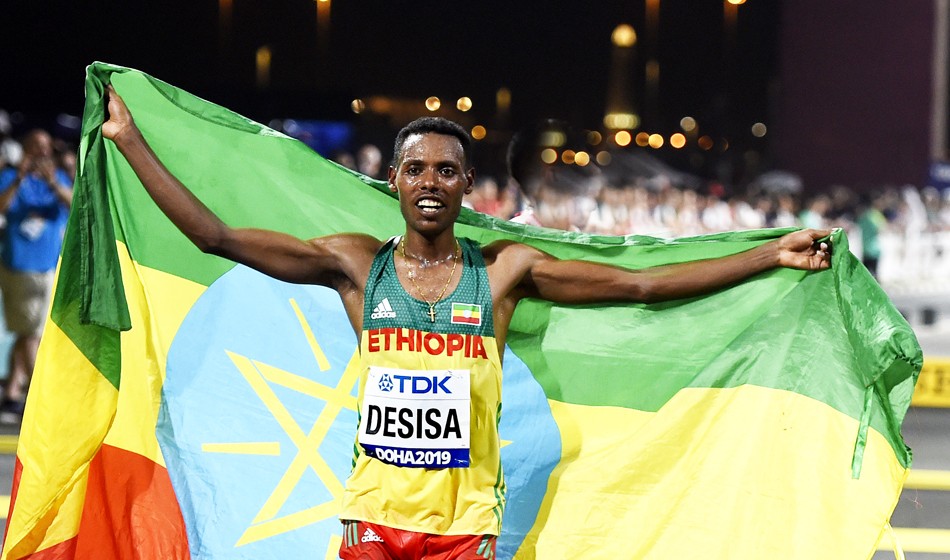 Lelisa Desisa, the former New York City and two-time Boston marathon winner, kicked clear from fellow Ethiopian Mosinet Geremew, plus Amos Kipruto of Kenya and Callum Hawkins of Britain, in the closing stages of the men’s marathon on the Corniche on Saturday night in Doha to win in 2:10:40.

During a remarkable final 4km, Hawkins caught the leaders after moving steadily through the field and the Briton blasted to the front and was leading with one mile to go before succumbing to Lelisa’s finishing surge as the Ethiopian held off compatriot Geremew with Kipruto third and Hawkins fourth in 2:10:56.

The performance by Hawkins came just 18 months after he had collapsed with heat exhaustion while leading at the Commonwealth Games on the Gold Coast. Weather conditions were not as fierce in Doha for this race as they were during the women’s marathon the previous weekend but temperatures were still 29C when the event kicked off just before midnight local time.

He had prepared well for this race, though, by training in the Mediterranean during the summer and also in a shed filled with heaters, where he was able to get the temperature up to close to 40C.

“At two laps to go I felt great so I just kept pushing and pushing. And then when I caught them I knew I didn’t have a kick, I was just trying to be strong,” said Hawkins, who repeated the fourth place he achieved in the marathon at the IAAF World Championships in London 2017.

“That’s why as soon as I got to them, I hit the front and tried to burn them off but they were just waiting for the kick. At least I burned off one of them!”

He added: “I really wanted that medal and that’s what I trained for. But it wasn’t to be on the night.”

The race began in bizarre style with Derlys Ayala – a Paraguay runner who had won the Buenos Aires Marathon in 2:10:27 only two weeks earlier – building up a one-minute lead.

Somewhat predictably he was caught at halfway, which the leaders passed in 65:56, before he promptly dropped out.

This left Zersenay Tadese leading from Desisa, Geoffrey Kirui, Geremew, Stephen Mokoka and Kipruto as Hawkins went through 13.1 miles in 66:31.

Tadese kept pushing the pace but began to suffer in the closing stages. Hawkins did the opposite and looked strong as he began to slice through the field.

With 5km to go Desisa, Geremew, Kipruto and Mokoka were together but Hawkins soon caught them and almost immediately nudged into the lead.

The leader, however, had been relatively cruising as he waited to launch his final effort – and Desisa surged clear with 600m to go from Geremew with Kipruto and Hawkins losing ground in the race for minor medals.