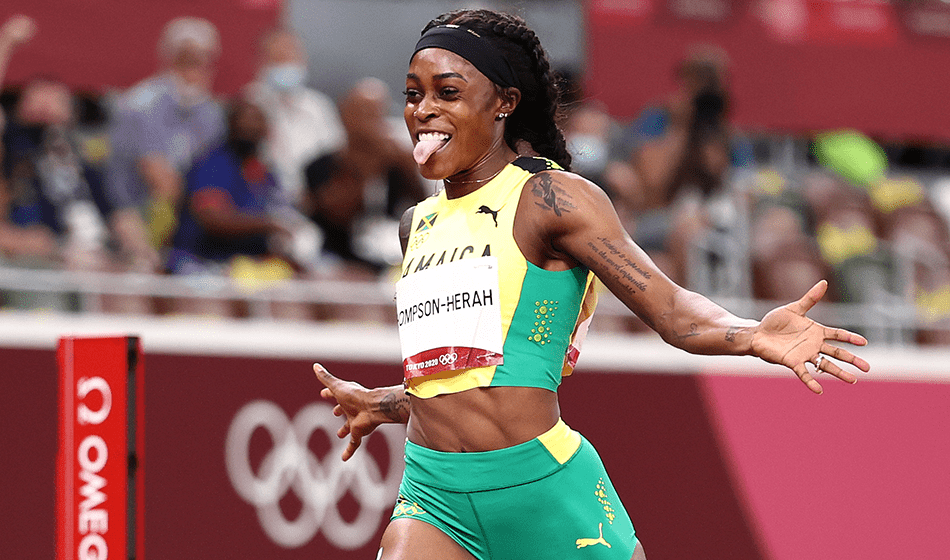 She had won three Olympic golds – starting with the sprint double at Rio and before emerging victorious from her big battle in the 100m in Tokyo against world champion Shelly-Ann Fraser-Pryce after a Jamaican record 10.61 to show she is in the form of her life.

All did not always appear to be so well in 2021, however.

Thompson-Herah was only fourth in her season opener at Miramar and just third best in the Jamaican trials to Fraser-Pryce and Shericka Jackson at both 100m and 200m. Many believed her long-standing Achilles problems might prevent her being at her best in Japan, especially in the longer event.

However, after her 100m victory she ambled through her 200m heat in 22.86 but not in a stupid way like her team-mate Jackson, who failed to advance after easing up prematurely.

The defending champion showed she meant business in the semi-finals when she sped to a 21.66 to equal her five-year-old PB and just miss Merlene Ottey’s 30-year-old Jamaican record of 21.64.

After that performance there seemed little doubt who would win the final.

Thompson-Herah was drawn in lane six, with her major rivals expected to be US trials winner Gabby Thomas in lane two – albeit she had had an unconvincing earlier campaign which suggested her 21.61 in Eugene was a one-off – with Fraser-Pryce in lane three and new world junior record-holder Christine Mboma in lane four.

Olympic 400m champion Shaunae Miller-Uibo was in lane eight but not expected to mount a serious challenge, having run a fast 400m heat in the morning, an event where she is a clear favourite.

As the gun fired the fastest reaction time came from Fraser-Pryce who sped around the bend in an effort to utilise her 100m speed. Thompson-Herah, who reacted slowest with 0.173, was closing fast though and she sped past her Jamaican trials conqueror with ease and powered clear from the rest.

She won by around three metres in a Jamaican record 21.53 to go second all-time behind Florence Griffith-Joyner’s 21.34 from her Seoul win in 1988.

The winner, who became the first Olympic double double women’s sprint champion in history, said: “I am delighted with the time after all the rounds which leave you tired.

“I knew the time would be fast as I ran my PB yesterday, which took a lot out of me. I just need to sleep as my body is in shock mode!

“I am so happy. I was begging for the line at the end. It’s good to be in the history books for the younger generation because we have a lot of Jamaicans coming through. This means a lot.”

Fraser-Pryce began to lose momentum and Thomas began to close but, coming from well back (sixth with 50 metres to go) Mboma powered past all bar Thompson-Herah to improve her African senior record and world junior mark to 21.81.

A delighted Thomas just got the better of Fraser-Pryce for bronze while back in fifth Marie-Josee Ta Lou gained her fourth Olympic top five placing without ever winning a medal with 22.27, just ahead of Beatrice Maslingi’s PB 22.28 and Mujinga Kambundji’s 22.20 as Miller-Uibo ran at 400m pace for a distant last in 24.00.

Elaine Thompson-Herah is now the fastest woman alive in both the 100m and 200m 🔥#Athletics #Olympics pic.twitter.com/ZyQpfTwkB1

Mboma, who had started the season as a 400m runner and set a stunning world lead and world junior record of 48.54 in Bydgoszcz, then had to change events when World Athletics decided her and Maslingi’s testosterone levels were too high for the 400m and they would have to run the shorter event which controversially doesn’t have the same levels imposed upon it.

Going into Tokyo she had a modest 22.67 PB from Prague in June and few thought she was a genuine contender when the likes of Thomas were running a second faster. However in Japan she ran world junior records of 22.11 in her heat and 21.97 in her semi before her 21.81 in the final.

She has also run 800m at altitude in 2:03.27 this summer and it would be fascinating to see what she could do at the longer event.

She said: “It feels great. I came here for experience and not to win a medal. I had to focus on the 200m but I know I can do better in the future. The people of Namibia are happy that I can take the medal back to the land of the brave.”