Beth Potter and Andy Vernon triumph at Highgate Night of the 10,000m PBs 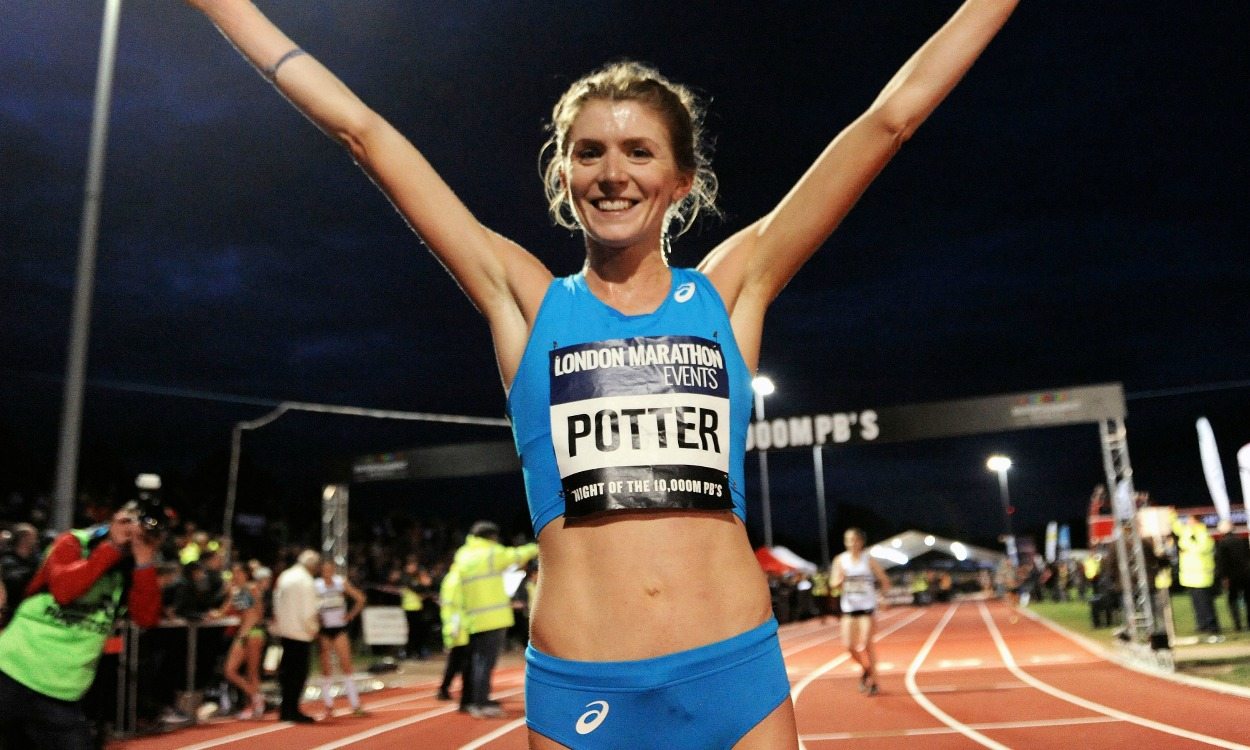 A night that began with Paula Radcliffe and Seb Coe telling an endurance seminar about the benefits of high mileage culminated with a remarkable triumph for a triathlete who runs 30 miles per week less than she did 12 months ago.

Beth Potter stormed to victory in the women’s race at the Highgate Harriers Night of the 10,000m PBs in a time of 32:04.63 that will see her qualify for the IAAF World Championships in London in August.

As a full-time runner she finished second Brit in this race in 2014 and 2016, but after focusing on triathlon in the last nine months she returned to the Parliament Hill track on the edge of Hampstead Heath in north London on Saturday night to claim the win that has previously eluded her at this meeting.

Given the emphasis from Radcliffe and Coe at the event’s earlier seminar on the importance of building a strong base through clocking lots of gruelling miles, it was ironic that the athlete who ultimately stole the show spends a large proportion of her week on a bicycle or in the pool. Although Potter has, of course, been building up an impressive endurance base – albeit via a triathlon training programme.

“I run loads less now than I used to,” she said, after beating Steph Twell by 12 seconds. “I only do about 50 or so miles a week, but I’m getting my aerobic strength from other areas like the bike and pool and my legs are a bit fresher. So it’s win-win.”

Her fresh legs helped her pull away from Twell in the final five laps with Katrina Wootton battling into third in 32:27.47, Jo Pavey taking fourth in 32:42.93 and Claire Duck fifth in 32:51.38, as 2016 winner Jess Martin faded to 11th after having been in contention for the first half of the race.

“I hadn’t run on the track since Rio and I’ve had a big career change in moving to triathlon so I was a little apprehensive coming into this race,” added the winner, “but I took confidence in some of the sessions I’ve done lately and I felt I could run well here.”

Potter definitely plans to take up her place in the GB team for the World Championships but her next race is a triathlon at Blenheim on June 4 followed by a 10km in New York. Moments after her victory at Highgate, she had no plans to change her triathlon training schedule in order to prepare for the 10,000m at the IAAF World Championships either. “What I’ve been doing lately is obviously working,” she said.

In her track debut at the distance, Twell was only one second away from the qualifying standard for London 2017 but she is now likely to drop back to 5000m for the rest of the season. “It was tough but good and I’m pleased to run a PB,” she said on her time of 32:16.23. “I’m super-happy for Beth too as she really deserved that,” added Twell, on what was a Scottish one-two in the race.

For Pavey, her chances of making the team for London 2017 now look slim. “It was always going to be a gamble running here,” the 2014 European champion explained. “Going into the London Marathon last month I struggled to get my health right. At 16 miles in London my legs cramped like mad and I felt really dizzy later that evening and over the next week or so I couldn’t run at all, which was weird. So I didn’t have much time to turn things around in training for this 10,000m here.”

A triathlete also led the men’s A race, too, but only for the opening laps as Alex Yee was merely pacemaking and stepped aside to let Dewi Griffiths, Ben Connor and Andy Vernon battle it out for honours.

For much of the race Vernon sheltered from the wind on a chilly, blustery night, but he cut loose with two miles to go and was a convincing winner in 28:21.15 ahead of runner-up Griffiths, who finished 10 seconds behind, with Samuel Barata of Portugal in third and Ricardo Serrano of Spain in fourth as they overtook English National cross-country champion Connor in the closing stages.

“I didn’t really have a plan on when to go to the front,” said Vernon. “I just wanted to win and went when I felt good.”

In blowy conditions the qualifying time of 27:45 for London was always going to be tough, though, and Vernon will now target it in Hengelo on June 11.

Potter and Vernon aside, the meeting was a victory for organiser Ben Pochee and his team at the Parliament Hill track. An estimated seven thousand spectators turned up to watch with many piling into lane three to cheer on the runners.

Together with music, break-dancers, some fiery pyrotechnics, a few bottles of beer and guests such as Coe, Radcliffe, former world 10,000m record-holder Dave Bedford and snooker star Ronnie O’Sullivan, it created a fantastic atmosphere.

» More coverage in the May 25 issue of AW