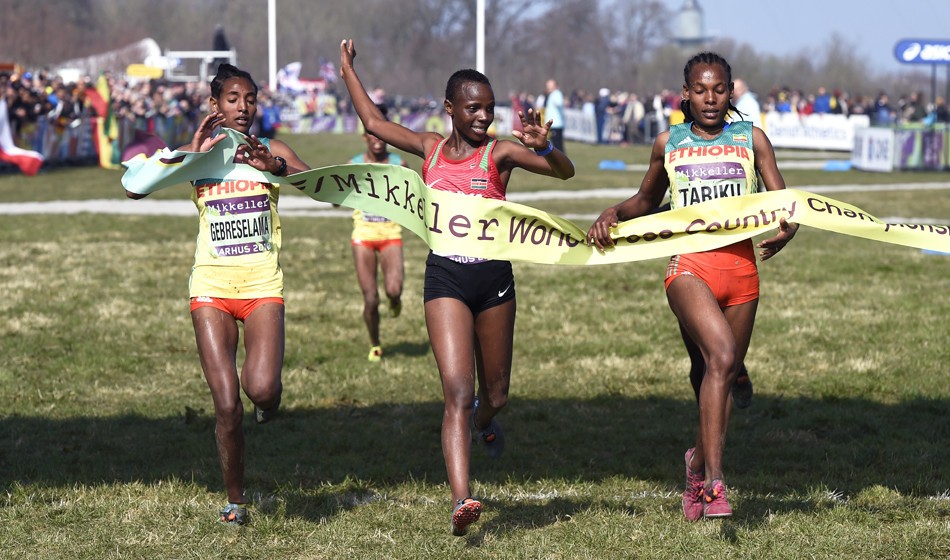 The finish could barely have been tighter but Beatrice Chebet was, eventually, crowned world champion after a stunning and controversial end to the under-20 women’s race at the IAAF World Cross Country championships in Aarhus.

The top three athletes – Chebet and the Ethiopian duo of Alemitu Tariku and Tsigie Gebreselama – were all awarded the time of 20:50 as they hit the tape together.

It was the Kenyan 5000m world junior champion who looked to have crossed the line first in the three-lap contest of almost 6km after the searing sprint finish but, with the tape actually being held behind the line, momentum carried both of her pursuers ahead immediately afterwards and it was in fact Tariku who was initially announced as the winner, with Gebreselama awarded silver.

After the photo finish footage was quickly reviewed, however, Chebet was correctly placed at the top of the podium.

“At first I was disappointed, as I was told I was third and I thought I had won, but now I am happy,” said the 19-year-old. “I am very proud to bring the gold to Kenya, and the team is also very proud. It was a very competitive course but, with the Ugandan runners and Ethiopian runners, it was great.”

It had indeed been a fascinating race, during which Uganda’s Sarah Chelangat, the 17-year-old Youth Olympic champion in the combined 3000m and cross country, held a slender lead at the head of a large pack going into the second lap.

She was still there at the bell, too, with Tariku close by alongside fellow Ethiopian Girmawit Gebrzihair, Chebet and Gebreselama, among others.

Chelangat had been doing all of the hard work, though, and it seemed like only a matter of time before someone took advantage and pounced.

Chebet and Tariku did just that but Gebreselama stuck with them, while Chelangat did her best to mount a charge. It would all come down to the downhill finishing straight and none of the athletes refused to give an inch, with the top three producing that remarkable finale.

Chelangat, for her part, was just a second behind in fourth.

Italy’s European Cross under-20 champion – Nadia Battocletti – was the first European over the line in 23rd after overtaking Britain’s Grace Brock, who came 25th, in the latter stages.

“It was amazing,” said the European team gold medallist and British trials winner of her run. “And the European champion only overtook me on the last bit. To make that jump from 11th at the Europeans and to be second European here is more than I could have asked for. It was an amazing atmosphere all around the course and that really spurred me on in the closing stages.

“I maybe didn’t kick quite as well as I would have liked at the end but I am really pleased – 25th place is a higher placing than I was expecting so I’m over the moon.”

Britain were seventh overall in the team standings, Amelia Samuels coming 35th on her GB debut, while Becky Briggs and Charlotte Alexander were 44th and 49th respectively.

Eloise Walker was two places behind while Olivia Mason’s fast start caught up with her as she finished 57th.

Team gold went to Ethiopia, with Kenya in silver, while Japan sprung a surprise to beat Uganda to the bronze medal by a single point.