Will Claye and Noah Lyles impress in Paris 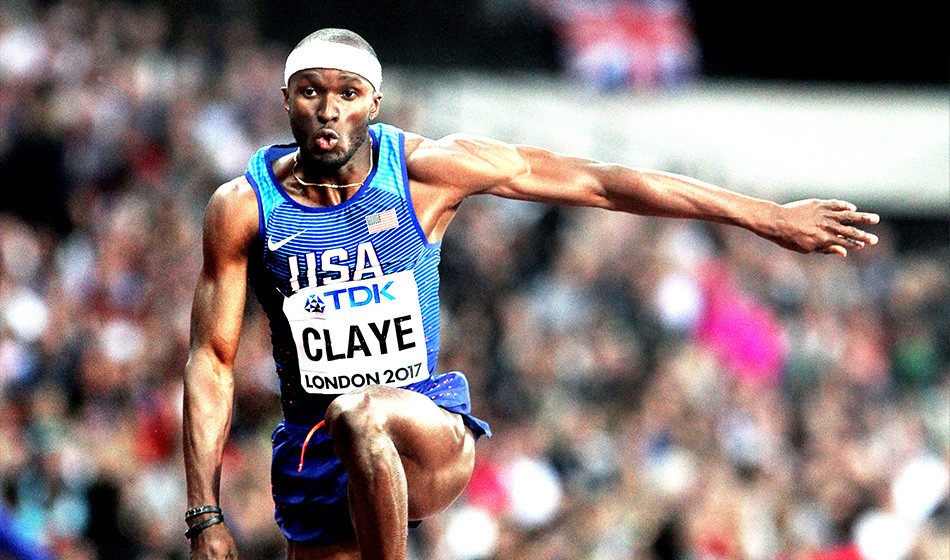 Arguably, despite some notable efforts on the track, it was the men’s triple jump which produced the top performance of a very good Paris Diamond League meeting.

World leader Will Claye dominated the first two rounds with leaps of 17.36m and 17.39m, though world and Olympic champion Christian Taylor came close with a 17.38m third round and he improved to 17.49m in the fourth but Claye responded with a 17.71m leap.

Taylor went even further in round five with 17.82m to equal his season’s best but Claye’s response was a mighty 18.06m meeting record.

Claye said: “It was a great day. My confidence is very high and I’m in a very good space right now, physically and my mindset. This is the furthest I have ever jumped overseas and it’s hard to talk about a number for Doha but I want to win.”

The track highlight was provided by Noah Lyles who ran a stunning 200m to break Usain Bolt’s meeting record of 19.73.

A distant second was world and European champion Ramil Guliyev in 20.01.

“I’m coming off a loaded week in training so that gives me confidence,” Lyles said. “It felt fast and it was the fastest I’ve ever felt coming off the turn.”

Elaine Thompson was impressive in winning the women’s 100m by almost two metres. Interestingly, though, her time was slightly slower than Dina Asher-Smith managed on the same day in Birmingham, despite a lighter headwind in Paris.

Daniel Roberts won the men’s 110m hurdles in an impressive 13.08 after his great rival Grant Holloway had led past halfway after a lightning start.

World and European champion Karsten Warholm started the night’s track action with a full one second victory in the 400m hurdles.

Ayanleh Souleiman led through 1200m in 2:50.02 and looked like he would hold off everyone but a fast finish from Ronald Musagala gave him victory by a foot.

His time was an Ugandan record-equalling 3:30.58 as he followed up his Birmingham victory one week earlier thanks to a well-timed 55 last lap.

Souleiman ran a season’s best 3:30.66 in second. Third place saw a battle between the Ingebrigtsens with Filip’s 3:31.06 getting the better of younger brother’s Jakob’s 3:31.33.

The first 10 broke 3:32 including Australian Stewart McSweyn who equalled his PB of 3:31.81 in eighth while European Team Championships and Dream Mile winner Marcin Lewandowski could only finish 10th but his 3:31.95 was a Polish record.

Seven athletes broke two minutes in the women’s 800m. The opening lap was a far too fast 55.62 by Chanelle Price. Fellow USA athlete Raevyn Rogers led through 600m in an exciting 86.56 and looked good until hitting the straight and she faded to sixth as another American Hanna Green won in 1:58.39 with Natoya Goule second in 1:58.59.

The 1500m specialist Gudaf Tsegay was a distant last for much of the race but came through strongly to run a PB 1:59.52, just two hundredths behind Rogers, who had been three seconds ahead of her on the final bend!

On the last lap world leader Soufiane El Bakkali controlled it superbly and won in 8:06.64 to repel the challenge of Benjamin Kigen who was second in 8:07.09.

In the field the next most notable event to the men’s triple jump was a highly competitive women’s pole vault where Canadian Alysha Newman had the biggest win of her life.

After clearing 4.75m at the first attempt, a third time clearance at 4.82m gave her the win and a national record. Three others cleared 4.75m with Katerina Stefanidi beating Sanid Morris and Anzhelika Sidorova on countback.

A lower quality victory also went the way of Canada in the men’s high jump. There, Michael Mason won with 2.28m to defeat Andriy Protsenko and Ilya Ivanyuk on countback.

Another Commonwealth athlete, the 2015 world champion Tomas Walsh dominated the shot. He won with a meeting record and season’s best 22.44m. Joe Kovacs was runner-up with 22.11m where the top eight threw 21.20m or further.

In the men’s non-Diamond League pole vault, world champion Sam Kendricks equalled the meeting record with a 6.00m clearance for the win.

World leader and world triple jump champion Yulimar Rojas further strengthened her position as favourite for Doha with a clear win in 15.05m.

Denia Caballero won the discus with a 66.91m throw as Sandra Perkovic was second with 65.01m.

He also won the long jump with a 7.50m leap and was even more dominant in the shot which he won with another PB of 17.08m.

The women’s 400m was a close race but a strange one in that no one came remotely close to even a season’s best. Stephenie Ann McPherson finished strongly to win in 51.11.

» See the August 29 edition of AW magazine for further coverage