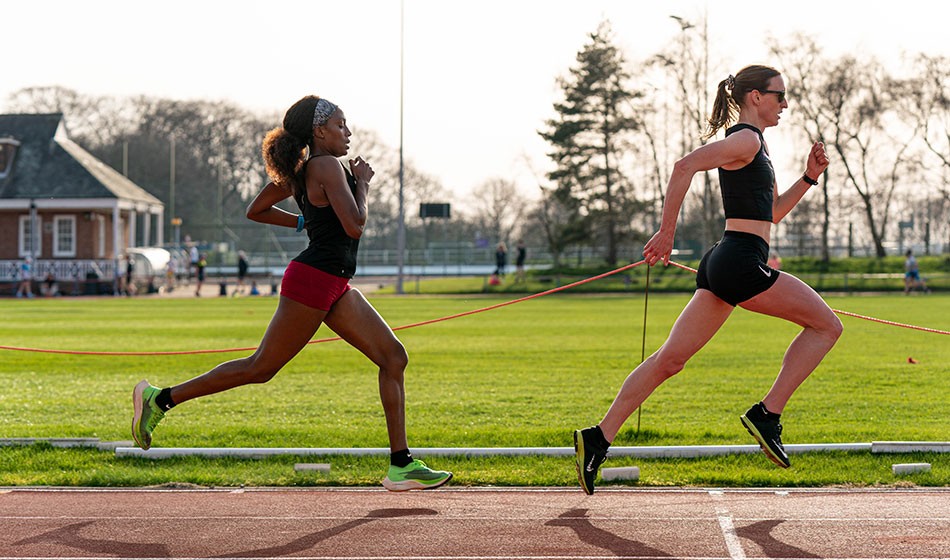 Call it fate or some sort of athletic serendipity, but an unexpected training partnership is proving to be the perfect fit for two top-class athletes.

Neither Laura Weightman nor Mary Ngugi had been aware they were living extremely close to each other in Leeds and it was by chance that the connection was made. They decided to partner up for some sessions last summer before the racing schedule and injury to both athletes brought the plan to a halt.

However Ngugi, normally based in Kenya, returned to visit her Leeds-based boyfriend at Christmas and, with travel restricted and the perfect training partner on hand, she opted to stay and run through a British winter.

For the past two months, under the guidance of Weightman’s coach Steve Cram, the pair have trained four or five times a week and have found a connection which has been mutually beneficial.

With Weightman, the second-fastest British woman in history over 5000m, targeting the Tokyo Olympics and Ngugi aiming primarily for an autumn marathon but looking to stay in top shape for whatever road racing opportunities may present themselves, things have begun falling into place.

The pair will test out the work they have been putting in when they race each other in the second staging of the Fast 5K, which will be streamed live on the AW website, at the Three Sisters Race Circuit in Wigan on Monday April 5.

Weightman’s last race outing came in October, when she convincingly won the inaugural event off the back of a Covid-curtailed, yet highly impressive, season.

Ngugi, a world half marathon silver and bronze medallist, has not raced for 18 months and can’t wait to get to a start line again. Both are clearly thankful for having been brought together.

“I’m the type of person who loves to train with someone,” says Weightman. “So the fact that me and Mary can train together [is great], but it’s not just anyone – it’s a world-class athlete.

“I think we bring our strengths and weaknesses together and Mary really pushes me in some areas and I can push her in different areas as well – I think that’s the beauty of it. It’s really been fun.”

“It makes it easier when you have company – going through all those miles and the speedwork, sometimes when one is tired, the other one helps them. So it’s been been really helpful and nice. And also it’s not boring. It’s exciting.”

As Ngugi points out “there’s no winter in Kenya” so that last couple of months have not been without their challenges. However, she has begun to acclimatise and can see the benefits of training in unfamiliar conditions.

“The winter has shown me how strong I can be,” she grins. “I don’t mind the cold weather that much, what I mind is the rain and when it’s windy. That is hard. But we did it.”

Not everything had gone entirely to plan for Weightman. A calf injury sustained in November was not part of the script, but she admits it might actually have turned out to be a real blessing.

“I missed a little bit of training then but come the new year I got back into it and by the end of January I was ready and able to train with Mary,” she says. “We’ve had a really great two months of training. I was really grateful that Mary needed a training partner.

“I’m definitely getting to the stage of the winter now where I’m feeling in good shape, and things have really progressed and gone well. That time off before Christmas in the long run might not have been a bad thing, just to slow things down a little bit and making sure that I don’t get too carried away too soon.

“I don’t want to be too fit too soon and I know that I can get quite fit quite quickly.

“It was difficult at the time with that injury but, coming through that and putting some good work in, I’m really pleased with where I’m at now and I think I’m coming into some good shape.”

As Weightman says, the Fast 5K is a chance to “really blast the system”. She might not be expecting to break any records this time around but it will provide the perfect indicator for how things stand in terms of Olympic preparation.

After months of training together, might it not feel odd to become opponents for the day? Not at all, insist both.

“If you’re an athlete, you’re used to this,” says Ngugi. “When you run a race with someone who you have been training with, you can help each other in the race, you can push each other, and hopefully the best one will win and you’ll be happy for them because you have been together you have seen how hard they work.”

Weightman adds: “We naturally suit each other. Especially on the road and the track, we have a natural rhythm and we’re side by side.

“We do road workouts and fartleks and tempo runs and without even meaning to we’re running side by side, and we almost get into each other’s rhythm and each other’s cadence.

“I think in a race we’ll race hard and that will push each other but I think we’re both going in with those personal goals that we want to see where we’re at and I think it’s not necessarily about coming out on top and racing like that.

“It’s about both of us. We’ve put some great work together, let’s race and see what times we can run.”

Weightman’s victory in Wigan back in October came despite some wet and windy conditions. The forecast looks a little kinder this time around, albeit cold, but after the weather both athletes have trained through together, they are confident of being able to combat whatever is thrown at them.

“Me and Mary have done workouts in worse conditions,” says Weightman. “I think we’re prepared for it.”