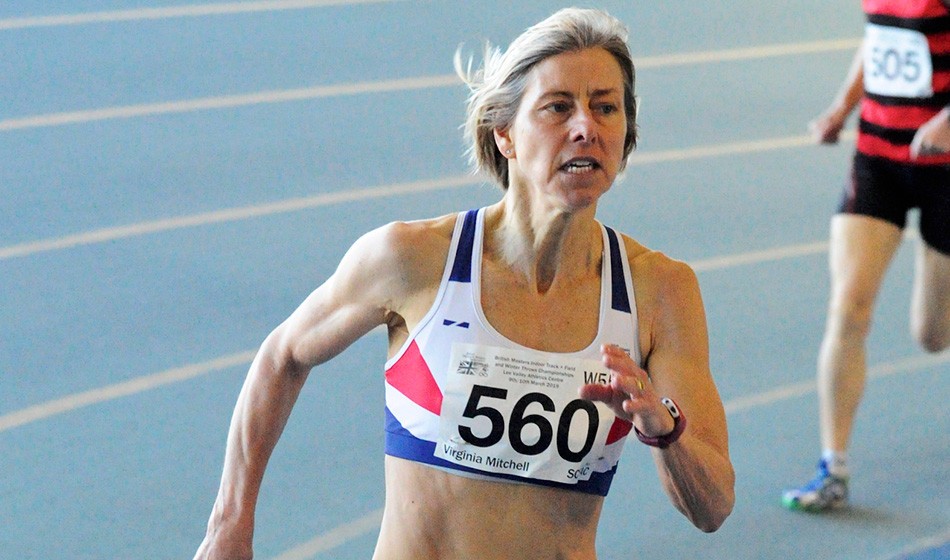 Mitchell took the honours with a world record in one of the most anticipated clashes of the championships in Torun, Poland.

The 400m champion in Torun and reigning world and European champion was facing her first ever race against world record-holder Elms, who had previously won the 3000m and cross-country golds in Torun and had already set eight world records this year.

Elms had been ill after the cross-country when she caught a chill with the race being delayed in very cold conditions and had thought about missing the race and waiting for the 1500m but felt sufficiently better on race day to give it a go.

After hoping someone else would lead, Elms realised after the break it was going to have to be her and she led through 200m in a very fast 35 seconds. The world record pace continued through 400m in 70 seconds, with Mitchell now the only runner in contact a few metres back. On the third lap, Elms ran another 35-second lap and the gap lengthened as Mitchell admitted that it is the third lap where she has a weakness.

On the final back straight, with the gap now over a second, Elms stopped going away and began to tire and gradually Mitchell closed and they entered the straight pounced and eased past and won by a few metres.

Mitchell’s time was 2:22.34 to break Elms’ previous record of 2:22.40 by just six hundredths of a second, though Mitchell thought the record was just 2:25.66 as the previous record was wrongly listed by the World Masters Association.

Her previous best this winter was 2:26 but she said it was the first time she has had a real race this year and said she gained confidence from her 400m win and realised she could catch her rival with 100m to go when she was starting to close.

A very disappointed Elms finished second in 2:23.10 while Sue MacDonald set an American record of 2:27.58 in third.

Britain had four of the top five as Christine Anthony and Anne Howe followed the American home for the best British event of the championships so far.

In the W70 800m, another multi winner Angela Copson also missed out but also with a magnificent effort, and it also took a world record to beat her.

Copson was chasing her fifth win in five days but after a 10km win the day before, she was up against American Sabra Harvey, who was new to the age group and was totally fresh and running her first race in Torun.

Copson clung on and was still close at 600m but on the last lap Harvey went away and her 2:50.57 took a whopping seven seconds off the Briton’s mark, who though slowing drastically on the last lap, still ran an European and British record 2:56.36.

Britain did win gold in the W65 race. As expected, world champion Bourgeois proved a class apart and she dominated the race throughout to win in 2:48.91.

3000m champion Ros Tabor benefitted from her fellow Briton’s pace as she stuck to her even pace plan while two of her rivals who had chased Bourgeois faded, and Tabor nipped past Sweden’s Ulla Karneback almost on the line to take silver in 3:00.32.

Britain won another women’s gold as Hornsey dominated the W75 race and won easily in 3:55.07, finishing over 10 seconds ahead of Germany’s Waltraud Bayer.

His compatriot Adrian Haines set a fast pace and was inside the minute at 400m but as he slowed on the third lap, it was Symes who kicked on and the Aldershot athlete powered away on the last lap to win comfortably in 2:02.14 for a one-second win over Germany’s Hubert Leineweber.

The other British gold was won in a very exciting M35 race. Brown made a bold move at the start of the last lap and then held his form well and repelled all challenges and was able to celebrate gold before the line in 1:58.70 even though France’s Jeremie Nattes was only 0.06 behind.

France’s Judicaelle Calif won the W40 800m from Ireland’s Annette Quaid as Britain’s multi world champion of the past, Louise Rudd, did well to take bronze while far from at peak fitness in 2:21.43.

Poland’s Jan Czastka won a very tight M60 race in which Britain’s former 1:45 man Paul Forbes had led most of the race but faded to sixth in 2:20.36.

Belarus athlete Palina Katsuba obviously got confused by the lapping and was well into her fifth lap when a photographer ensured she had finished. When her silver medal was confirmed, she then proceeded to dance vigorously for the next few minutes.

After originally doing 50 metres after the finish not realising she had finished until a photographer stopped her W80 silver medallist Palina Katsuba performs a celebratory dance pic.twitter.com/VqctkBz20u

In the field, British athletes had to make do with silver medals.

Mark Johnson fought all the way in the M50 pole vault but while he cleared 4.20m third time, his rival Francisco Hernandez Rivero did it on his first and won on countback. Glyn Price won bronze with a 3.90m leap.

There were a number of triple jump medals too – four silvers. Louise Wood jumped 9.93m but lost out to Finland’s Kisi Spoof-Tuomi’s 10.12m. W55 Jo Willoughby achieved a 10.52m leap and was only beaten by USA’s multi-talented jumper Neringa Jakstiene who won with a 11.09m effort.

Teresa Eades was W60 runner-up as she jumped 9.20m but that was bettered by Spain’s Maria Rosa Esccribano Checa who jumped 9.77m. Iris Holder won the W75 triple jump silver with a 6.25m leap behind Germany’s Helgard Houber’s 6.50m.