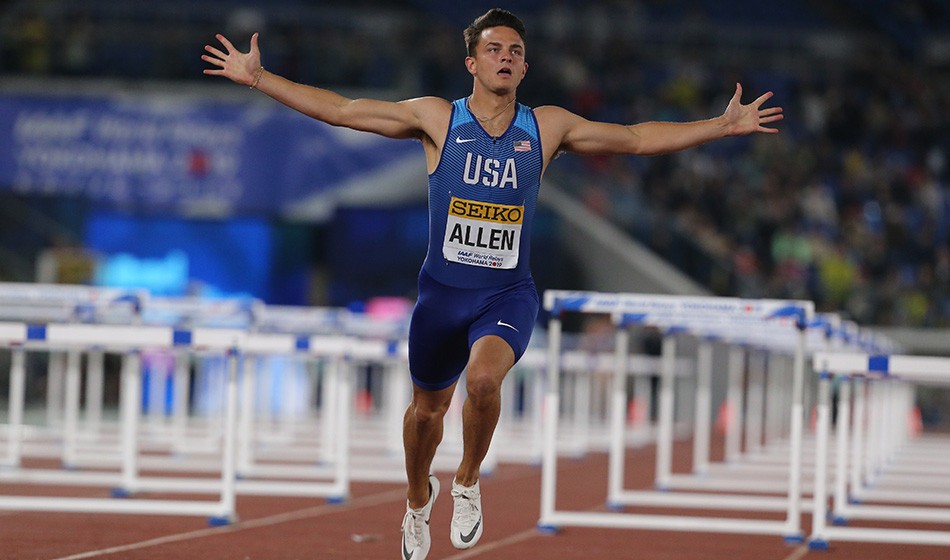 There were some thrills, spills and an impressive juggling act on the first day of the IAAF World Relays in Yokohama, with American teams claiming the two titles on offer.

Both the mixed shuttle hurdles and 2x2x400m were making a debut at the event, which was being held in Japan for the first time after three editions in The Bahamas.

As well as World Relays titles, athletes were also racing for IAAF World Championships qualification and Britain’s men’s 4x100m team plus the 4x400m squads all secured their spots for the global event taking place in Doha later this year.

The shuttle hurdles final brought the first evening of action to a close and after some exciting racing in the heats, the final ended up being a two-way battle for the win.

While the Jamaica team did not take to the starting line, Australia were disqualified for a false start, leaving an American quartet of Christina Clemons, Freddie Crittenden, Sharika Nelvis and Devon Allen to race against the host nation team of Ayako Kimura, Shunya Takayama, Masumi Aoki and Taio Kanai.

The event required each of the two male team members to race over 110m in one direction, handing over to one of their two female team-mates to hurdle back up the straight over 100m, running out an extra 10 metres at the end of their legs.

After a close start, a strong third leg by national indoor champion Nelvis made an impact and she handed over to 2016 Olympic 110m hurdles fifth-placer Allen, who crossed the line with 54.96 on the clock to win ahead of Japan’s 55.59.

Interview with @SheTheMann_ing after forming part of the @usatf team to win the inaugural World Relays shuttle hurdles title at @IAAFYokohama19 pic.twitter.com/yi28qeHyFX

Great Britain did not field teams in either of those events but of the five events the nation did contest on the first day of action, teams qualified for the world championships in four of them.

Ahead of the event CJ Ujah had told AW how the men’s 4x100m team was looking to “put down a marker” and they started strongly by running a world-leading time of 38.11 to win their heat.

Ujah was joined in the team by his fellow world gold medallists Adam Gemili and Nethaneel Mitchell-Blake, plus Harry Aikines-Aryeetey.

Brazil were second in that heat in 38.22, while other heat winners were Italy (38.29) and USA (38.34). The Jamaica team of Nesta Carter, Julian Forte, Rasheed Dwyer and Tyquendo Tracey just qualified for the final after running 38.51 for third behind GB.

“It was a cold night and we just wanted to get through,” said Gemili. “We wanted to be sensible so we were pretty safe with the check marks, relying on foot speed.

“Now we can play around with it tomorrow. But we have qualified for Doha and that is the main thing.”

There was disappointment for the GB women’s squad however as they were unable to get the baton around and will now look to secure a world championships place via world ranking at the end of the qualification period.

A late line-up change saw the withdrawal of Asha Philip, who had a tight hamstring, and Kristal Awuah replaced her on leg one. After she handed the baton to Desiree Henry, the changeover to Ashleigh Nelson did not go to plan and anchor Daryll Neita was left without the chance to run.

Britain’s Zoey Clark, Laviai Nielsen, Amy Allcock and Emily Diamond finished second in their 4x400m heat with 3:28.31 to qualify for the final and Doha as third-fastest overall behind the US team (3:25.72 WL) and Poland (3:28.05), while the GB’s men’s 4x400m team of Rabah Yousif, Dwayne Cowan, Cameron Chalmers and Martyn Rooney ran 3:03.11 to finish third in their heat and sixth overall to also advance and qualify for Doha.

The American squad clocked 3:02.06 to go quickest overall in the men’s heats ahead of world champions Trinidad and Tobago with 3:02.49.

“It was hard, I felt rusty,” said Rooney. “It is early in the season and I think our guys need a couple more races and we would be winning heats like this.

“The Czech guy [Michal Desenský] ran in front of me and I had to take a step inside. I am not very good at stop start running any more. It was enjoyable and I enjoyed having a go.”

The GB mixed 4x400m quartet of Alex Haydock-Wilson, Finette Agyapong, Anyika Onuora and Jamal Rhoden-Stevens missed out on a place in the final after running 3:20.49 but that time placed them 12th overall to secure a spot for Doha.

There was great support for the host nation in the Yokohama International Stadium but among the most talked-about performances was an impressive, but illegal, baton change between Yuki Koike and Yoshihide Kiryu in their men’s 4x100m heat.

In a great position approaching the final bend, the two athletes were unable to get a smooth changeover and ended up juggling the baton, with Kiryu somehow managing to catch it to allow them to finish, though they were later disqualified.