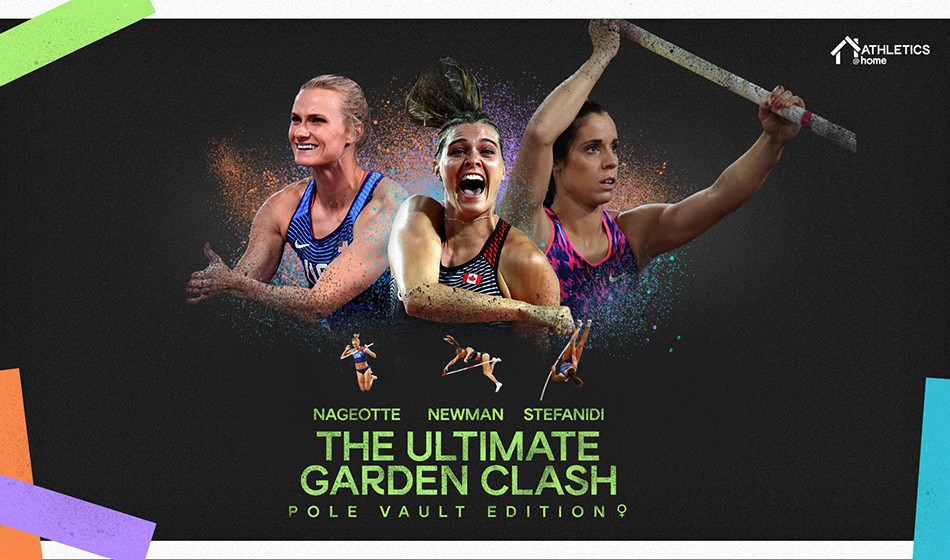 Live athletics action is back. Two weeks after the inaugural ‘Ultimate Garden Clash’, it is now the turn of Katerina Stefanidi, Katie Nageotte and Alysha Newman to take to the unique remote competition stage.

The first edition of the contest saw their fellow pole vaulters Mondo Duplantis, Renaud Lavillenie and Sam Kendricks battle to clear a 5.00m bar as many times as they could within 30 minutes. On Saturday (May 16), the women’s competition will require Olympic champion Stefanidi, two-time US indoor champion Nageotte and Commonwealth champion Newman to achieve as many 4.00m clearances as possible within that same time frame.

While the men competed from their home bases, the women will be connected by video link from their local training facilities in Greece, the United States and Canada.

Live streamed, the competition will be held on Saturday evening from 5pm UK time, weather permitting, and will see Stefanidi compete in Athens, Nageotte in Marietta, Georgia, and Newman in Bolton, Ontario.

“I feel like most people would expect the guys to win in a head-to-head, so if they did, it won’t mean too much. But I think the way this is designed it is very possible – or at least just as likely – that we beat them, either as a group, or individually. The reason it is important to win is so that we can have bragging rights for the rest of our careers! But it is also important to show how competitive the women’s pole vault is right now.

“We calculated the equivalent to the guys’ 5.00m for elite women would have been around 3.85m, but we felt 4.00m was a more digestible number. So we are jumping at a relatively higher bar which might cost us a couple of clearances (each) but I think despite that, we can still aim for 100.

“For me, competition is the reason I do athletics. I love pole vaulting but I love competing in pole vault more. As athletes we can’t just train to train. We need competitions to test not only what we have been working on but also our limits. I think competitions are even more important during these challenging times when we really don’t know when and where we will be able to come together in person to compete next. It increases motivation and gives clarity to training.”

Nageotte is also delighted to have the opportunity to return to competition in an unexpected way.

“This format is so much fun!” said the American, whose indoor PB of 4.91m matches Stefanidi’s outdoor best. “It’s non-stop action which is extremely appealing to fans.

“There is constant entertainment with the vaulters trying to take as many jumps as possible in a short time, and that’s something sports fans really appreciate.

“This format is also very simplified. Everyone is jumping at the same bar (height) as many times as we can. There’s no passing, height changes, or other aspects of the pole vault that can sometimes lead to confusion for spectators. It’s as head-to-head as it gets and we all love a good head-to-head competition!”

Newman, who has a PB of 4.82m, added: “Just like a normal competition, I’m planning on taking one jump at a time. It’s still a little chilly here in Canada so I will definitely have to layer up.

“My number one goal is to leave the bar up so I don’t lose time putting it up. It will be awesome to compete against these ladies because I’ve been dying for a competition but we are definitely trying to beat the guys’ number of jumps put together.”

World Athletics president Sebastian Coe said: “I’m excited by the potential of this creative project and I want to thank the athletes for so enthusiastically creating and embracing this concept. We know there’s a real appetite among athletes and fans to return to competition but we need to do that in a way that is careful and respectful of the measures put in place by public health authorities around the world so we can keep our community safe, and modern technology has allowed us to do that.

“This is a concept that we hope can be adopted or adapted by some of our area associations and member federations around the world to help their athletes get a feel for competition again until they can return to more normal meetings, which we hope can happen later in the year.”