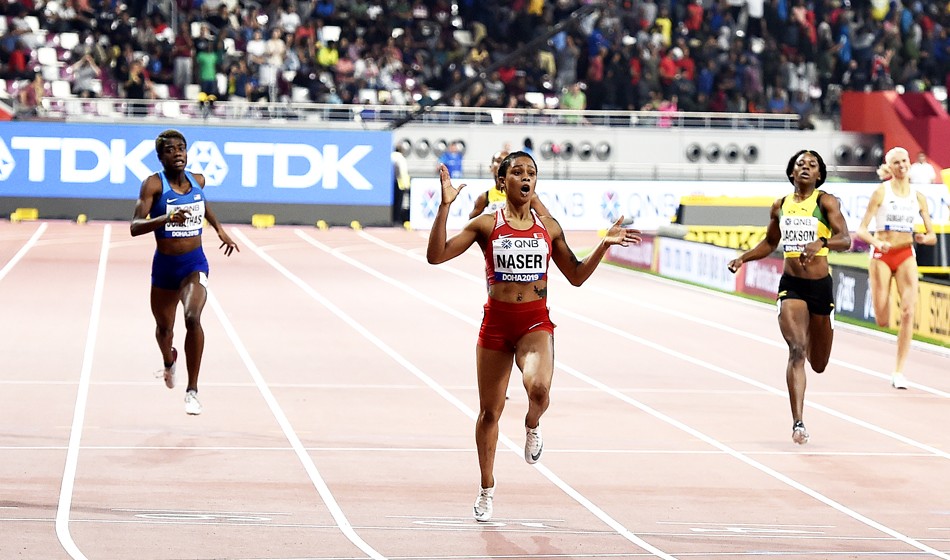 Bahraini sprinter storms to success in 48.14 to go No.3 all-time

Everyone was expecting Olympic champion Shaunae Miller-Uibo to win world 400m gold and the Bahamas athlete ran a superb Americas record of 48.37, a time only four athletes had previously bettered, to take 0.60 of a second off her PB but she was well beaten by an astonishing run from 21-year-old Salwa Eid Naser.

The Bahraini had not lost a 400m race since Monaco 2018 but had not faced Miller-Uibo this summer and was a strong bet for second.

She had run in the mixed relays and contributed to a Bahrain bronze ahead of Great Britain but her form, while good, had not suggested anything this earth-shattering.

World 400m winner Salwa Eid Naser says: “I’m used to chasing but in this race I was being chased!” #WorldAthleticsChamps pic.twitter.com/xb0Zek4Nen

She had won a silver medal in London while still a junior and had improved to 49.08 last year but few thought she had the firepower to match Miller-Uibo, who has run 21.74 for 200m this summer and had the world lead with 49.05 to Naser’s 49.17 where she had a narrow win in Lausanne.

Miller-Uibo started well but Naser was clearly ahead at 200m and went further away on the final bend which she powered.

Everyone expected Miller-Uibo to run her down as they hit the straight and she began to close but despite running faster than she had ever run before the Bahraini held her form well and easily held her advantage down the finishing straight to win by two metres.

She seemed astonished with her winning time of 48.14, a near one-second PB.

Miller-Uibo finished very strongly and flowed beautifully as she has in many 200m races this summer but was shocked to see for the second world championships in a row that the Asian athlete had beaten her.

Only world record-holders Marita Koch (47.60) and Jarmila Kratochvilova (47.99) have run faster than Naser and then only the once and so it was the fastest 400m for 34 years.

While the first two were a long, long way ahead the other times were also special and the top five all set PBs.

Shericka Jackson added to her list of global bronzes with a PB 49.47 while Wadeline Jonathas improved to 49.60 just ahead of Phylis Francis.

Incredibly Francis, who won in London 2017 to defeat the top two here, ran a PB but found herself a second and a half down on the winner, who said: “This is crazy. I already did the mixed relays and I was just hoping for the best but now I’m world champion. I’m screaming, I’m so happy. I’m so excited.

“It’s been tough with the training and injuries and getting here has been so hard.

“To cross the line and see that amazing time, I couldn’t believe it. The world record? Anything is possible.”

A stunned Miller-Uibo added: “To run a time like that and not win is incredible. I think I let her get away from me a little too much but I got a huge PB so I have to be happy with that. She ran a crazy race.”