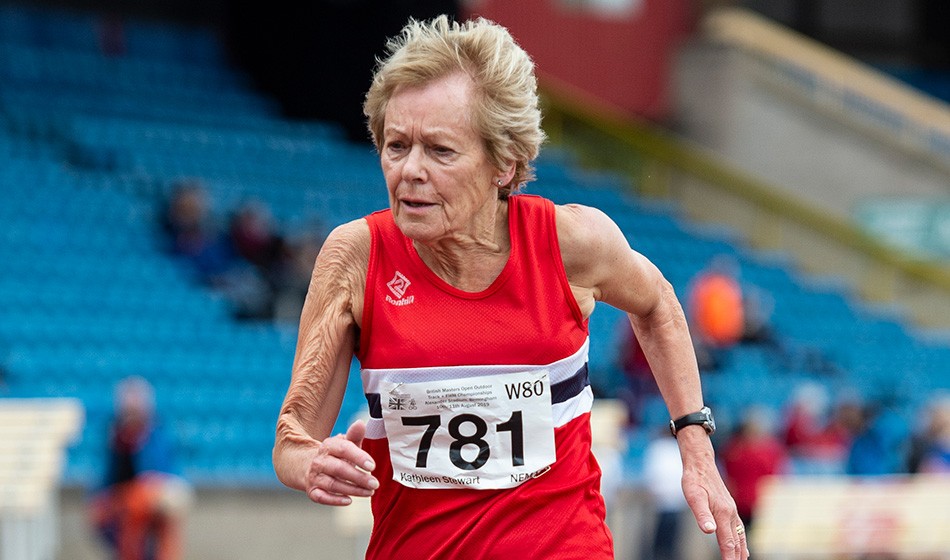 Denied an opportunity to compete in the European Masters Indoor Championships next week because of the coronavirus, athletes were in record-breaking form on the opening day of the British Masters Championships at Lee Valley.

Kathleen Stewart did not actually beat anyone in the combined W60-W80 400m, finishing 14 seconds down on her only opponent W60 Hilary West, but her 90.37 clocking not only improved her own British W80 record of 92.56 set last month by over two seconds but also eclipsed the world record of 91.10 set by Italian Emma Mazzenga six years ago.

John Wright won the M60 400m in the British Masters Championships at Lee Valley in a British record 56.91 having earlier won the 60m in 7.93 pic.twitter.com/psII3EwgJd

Steve Linsell set a British M55 high jump record of 1.71m as he cleared it at his third attempt while Carol Parker set a British W50 shot record of 12.63m, to eclipse 1970 Commonwealth discus champion Rosemary Chrimes’ mark from 34 years ago.

European masters athlete of the year Evaun Williams won the W80 hammer with a 31.97m throw and also won the shot with a 9.55m throw and the weight with a 12.75m throw.

He also came close in the flat 60m metres as he won by two metres in 7.61 to just miss Ron Taylor’s 30 year-old record of a hand-timed 7.6 but it was easily the fastest ever electronic time, and arguably better, as Taylor’s best was a mere 7.76 on automatic timing.

Multi world and European champion Irie Hill won the W50 pole vault in a championships record 3.45m but missed out on setting a world record 3.55m.

Three of Britain’s world indoor 1500m champions, who had all planned to run in Braga before its cancellation this week, all took gold medals.

British masters athlete of the year in 2019, Clare Elms, had to run in the combined W50/W55 race instead of the faster younger race and running solo, won by 20 seconds from W50 champion Lisa Webb.

Jason Carty missed his recent British record in winning the M50 60m in 7.22 in beating a high quality field including Darren Scott (7.41) and Guiseppe Minetti (7.52) while Dominic Bradley won the M40 race in 7.05 from Elliott.

Vanessa Grant was the fastest woman overall with a 7.90 victory in the W35 event.

Also impressing was Lucy Marshall who won the W35 hammer with a 53.80m throw and the weight with a 15.51m effort.

» Look out for our social media updates and further online coverage this weekend, with full reports in next week’s magazine