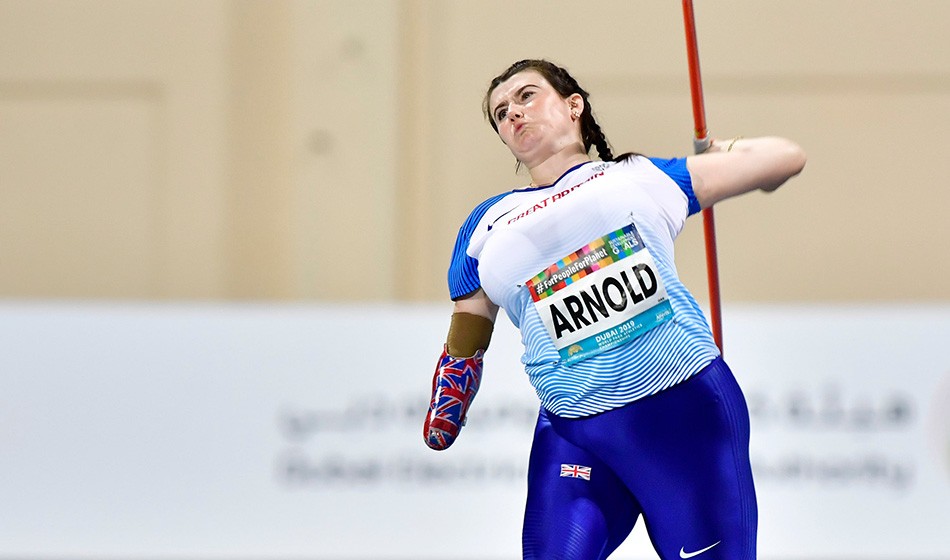 Hollie Arnold and Jonathan Broom-Edwards gained two more gold medals for the Great Britain and Northern Ireland team on the fifth evening of action at the World Para Athletics Championship in Dubai.

After taking the lead in round one with a throw of 40.87m, Arnold moved down a place when New Zealand’s world record-holder Holly Robinson threw 41.60m in the second round. But the Briton regained the top spot with her eventual winning mark thanks to her third throw.

“I’m so happy, this season has been so, so long, so I’m really happy to go out there and get a PB and a gold medal,” said Arnold.

“That’s what I wanted to do and I had a really good series as well. Obviously, I really wanted that world record, but that’s where Tokyo is going to come into it and I can’t wait for that.”

For Broom-Edwards, it was a successful return to the global stage after an Achilles injury in 2018.

“There are just so many different emotions flowing through me today,” said the three-time world silver medallist, who won ahead of Uzbekistan’s Temurbek Giyazov. “I don’t know if I’m going to sleep tonight, it’s been a long time coming and it’s been a hard 18 months, but I made it and it definitely gives me some relief.”

Back on the track, Cuba’s Omara Durand claimed an impressive 10th world title with victory in the T12 100m, clocking 11.66.

“I’m really happy because this is my 10th gold medal in the World Championships and I’m enjoying it as always, but now I have to run again,” said the world record-holder, who also raced in the 200m heats a short while later.

Germany’s Johannes Floors had broken the world T62 100m record with a time of 10.54 in the heats and he enjoyed further success in the final, winning the T64 title in a time of 10.60 ahead of South Africa’s Mpumelelo Mhlongo who ran a T44 world record of 11.00 for silver, the same time as Floors’ team-mate Felix Streng ran in third.

In the T38 400m final, Britain’s Kadeena Cox added a silver to the gold she won in London two years ago, running 62.20 in only her second 400m race of the season and her first in British kit since 2017.

Russia’s Margarita Goncharova broke the championship record with her winning time of 62.08, while Cox’s team-mate Ali Smith finished fourth in 65.45.

“It’s so nice to be back on the podium and just to be back at these championships is amazing,” said Cox, who has spoken openly about her disordered eating and struggles including injury in the lead up to the event.

“As frustrating as it is, I’ve got a silver so I can’t be unhappy with my championships and winning a medal, it’s just not my preferred colour.”

.@kad_c has spoken openly about her disordered eating and challenges in the lead up to the World @ParaAthletics Championships and after claiming T38 400m silver she shared insight into her race and struggles with @stuartweir #Dubai2019 pic.twitter.com/fekVTP23Ux

Her team-mate Thomas Young also secured silver in the T38 100m, just missing out on gold as his 11.00 European record matched the time recorded by winner Dening Zhu of China as he crossed the line just 0.007 of a second behind.

“It’s a European record again and a PB again and you can’t do much more than that really other than win gold,” said Young, who had broken the record earlier on in his heat. “I’m slightly disappointed but I know that I have lots to work on as we head towards Tokyo.”

The morning session had seen more silver for the GB team as Jo Butterfield claimed her first medal on the world stage for four years in the F51 club throw.

The Paralympic champion’s first round throw of 21.67m placed her second behind Ukraine’s Zoia Ovsii’s world record of 25.23m.

After her F51 club throw silver at the World @ParaAthletics Championships, @Jo_shuni spoke with @stuartweir about her performance in Dubai, how she got into the sport and her life as an athlete #Dubai2019 @BritAthletics @scotathletics pic.twitter.com/GsNGiLKkxi

China’s Paralympic marathon champion Zou Lihong won the women’s T54 1500m in 3:34.09, just ahead of world record-holder and Commonwealth Games winner Madison de Rozario of Australia. The men’s title was won by Thailand’s Prawat Wahoram in 3:00.20 ahead of China’s Zhang Yong and Switzerland’s Marcel Hug, while Britain’s Richard Chiassaro and Nathan Maguire both qualified for the semi-finals of the T54 400m.

There was a world record broken in the heats of the T47 100m as American Deja Young, who is coached by 1984 Olympic 800m champion Joaquim Cruz, clocked 11.92 to improve the global T46 mark.