From the AW archive: Paula Radcliffe’s European 10,000m record in the rain 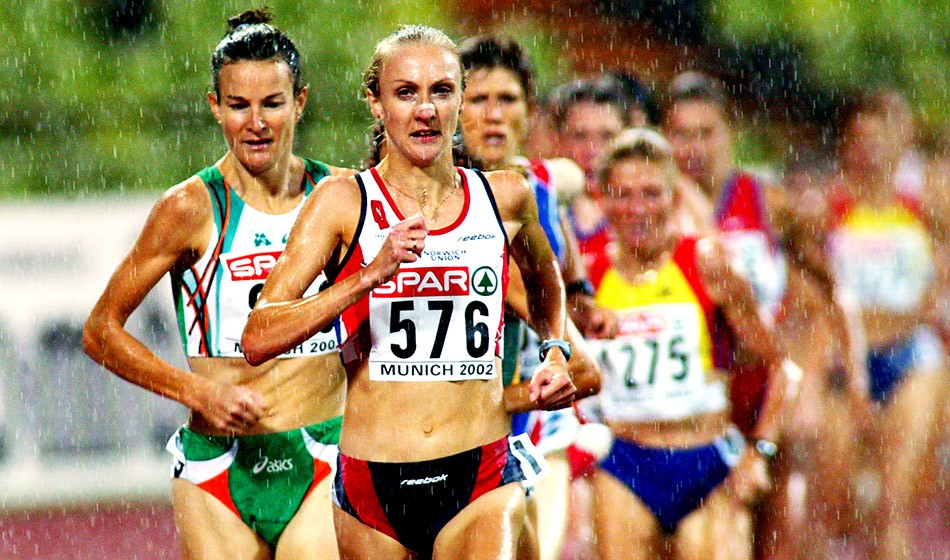 Part of a series featuring AW content from years gone by, here is our report of Radcliffe’s win in Munich in 2002

Paula Radcliffe led from gun to tape in driving rain to shatter the European record by 12 seconds and her British record by 25 seconds.

With a time of 30:01.09, she came within a stride of the 30-minute barrier and is now ranked second only to one woman on the all-time rankings, the Ma Junren-coached Chinese athlete, Wang Junxia.

The 28-year-old Bedford & County AC runner broke clear just before the 2km mark, scorched through 5km almost nine seconds quicker than Sonia O’Sullivan’s championship record, and lapped everybody in the field apart from the silver and bronze medallists, O’Sullivan and Lyudmila Biktasheva, plus fourth placed Mihaela Botezan of Romania.

It was a remorseless and relentless display of frontrunning. As Nick Bideau, O’Sullivan’s partner, said: “It wasn’t a race, it was an exhibition.”

Behind the rampant Radcliffe, O’Sullivan was dragged to an Irish record of 30:47.59, Biktasheva clocked a lifetime best of 31:04.00. Botezan and Latvia’s Jelena Prokopcuka ran national records in fourth and fifth. Radcliffe’s team-mate, Liz Yelling, was lapped twice. Fernanda Ribeiro of Portugal, the 1996 Olympic champion, tried to hang on during the early laps but was completely broken by the fierce pace and stepped off the track just after halfway.

“It wasn’t a race, it was an exhibition” – Nick Bideau

With a time barely two seconds slower than the legendary Emil Zatopek ran at the 1948 Olympics, Radcliffe’s run was reminiscent of Liz McColgan’s frontrunning victory over Derartu Tulu at the 1991 World Championships in Tokyo. Yet this was even more devastating.

Competing on the first night of the championships, Radcliffe blasted through the first lap in 69.76 seconds before settling down with a series of mesmerising 71-72-second laps. After 10 laps she was on course for 29:27 – an incredible four seconds inside Junxia’s record, which was set in Beijing in 1993 in controversial circumstances amid unproven allegations of lax drug testing.

Breezing through 5km in 14:57.65 (faster than Liz McColgan’s lifetime best) Radcliffe was now running much of the race in lane two and began to slow gradually from 6-8km, eventually slipping outside sub-30-minute pace with 2km to go before rallying with a final lap of 69 seconds.

Initially disappointed not to break 30 minutes, when the magnitude of her performance sank in she was delighted to have smashed a European record that was set by her heroine, Norway’s Ingrid Kristiansen. After her Commonwealth victory, this was only the second major track title of Radcliffe’s career.

Describing the race in English, German and French after the race, the multi-lingual Radcliffe said: “I just relaxed and concentrated on attacking the time.”

On breaking Kristiansen’s mark, she added: “I’ve looked up to Ingrid for a long time. She helped with my preparation for the marathon and said it would be possible to run fast on the track after a marathon.”

Indeed, Radcliffe says her seemingly invincible form this year is due to the marathon training she underwent for London. “The marathon made a big difference to me mentally and physically. Winning London also took the pressure off when I came on to the track.”

“I’ve looked up to Ingrid for a long time. She helped with my preparation for the marathon and said it would be possible to run fast on the track after a marathon” – Paula Radcliffe on Ingrid Kristiansen

On Junxia’s suspect world record, Radcliffe and O’Sullivan were quizzed but refused to be drawn.

“I know people had doubts at the time,” said Radcliffe, referring to a 10,000m record that featured a final 3km in 8:15. “But it (drug-taking) was never proven. Anyway, who knows, we might be able to get near the record yet. A couple of years ago I probably wouldn’t have thought I’d be running the times I am now.”

Radcliffe’s friend and team-mate, Liz Yelling, suffered cramps in her calf muscles and was three-quarters-of-a-minute outside her best with 32:44.44.

“I expected to be lapped but not twice,” she said. “That’s what happens when you run two 10km in a week.”

Wisely, Radcliffe later withdrew from the 5000m in order to begin preparations for the Chicago Marathon in October.”