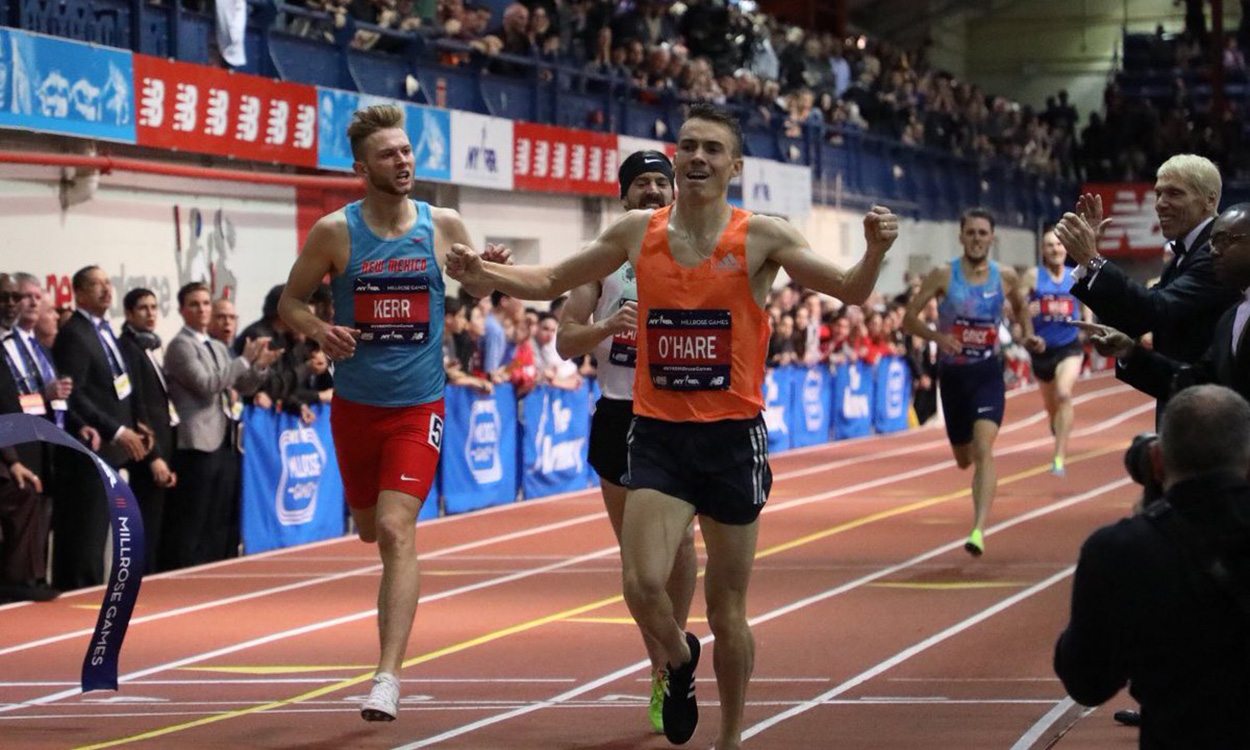 Chris O’Hare has won the prestigious Wanamaker Mile at the NYRR Millrose Games, becoming the first British man since John Whetton in 1965 to claim victory in the race.

Clocking 3:54.14, the 27-year-old led a Scottish one-two on Saturday night as he was followed over the finish line by Josh Kerr, the two-time NCAA champion moving from 53rd to fifth on the UK indoor all-time list with his PB of 3:54.72.

Ahead of his season opener in New York, O’Hare had told AW how he was “ready to roll” and also looking forward to seeing his wife Meredith and 16-month-old son Ronan after having spent the past month at a training camp in Flagstaff.

Following his victory, O’Hare was joined on the track by Ronan and the Wanamaker Mile trophy.

“It’s a prestigious race,” he said, “so to get your name on that trophy is pretty special.”

Kerr had also spoken of his own fine current form in the lead-up to the race and that was demonstrated in his strong run for the runner-up spot.

Two-time Olympic medallist Nick Willis – who had been on the hunt for his first title in six attempts – placed fifth in 3:57.72, one place ahead of Kyle Merber.

In the women’s Wanamaker Mile, Colleen Quigley secured success with her time of 4:30.05 putting her narrowly ahead of her fellow American Kate Grace with 4:30.08, as Ireland’s Ciara Mageean was a close third in 4:30.99.

Shaunae Miller-Uibo equalled the world indoor 300m best with her time of 35.45, while Emmanuel Korir won the 800m in 1:44.21 to go third on the world all-time indoor list. Behind him, Donavan Brazier went second on the US all-time list with 1:45.35, while GB’s Kyle Langford was fourth in a World Indoor Championships qualifying time of 1:46.43.

Shadrack Kipchirchir won the 3000m in 7:45.49, with Britain’s Andrew Butchart fifth in 7:47.21, while a photo finish in the women’s race saw victory for Aisha Praught-Leer in 8:41.10 from Emma Coburn and Dominique Scott.

Marcin Lewandowski pipped Erik Sowinski by one hundredth of a second to win the 800m in 1:46.90 as Britain’s Andrew Osagie was a close fourth in 1:47.02.

In Ohio, Lucy Bryan moved to fourth on the UK indoor pole vault all-time list with 4.47m to win at the Akron Invitational.

» NYRR Millrose Games results can be found at results.nyrrmillrosegames.org