Charlotte Purdue and Mo Farah back for Big Half title defence 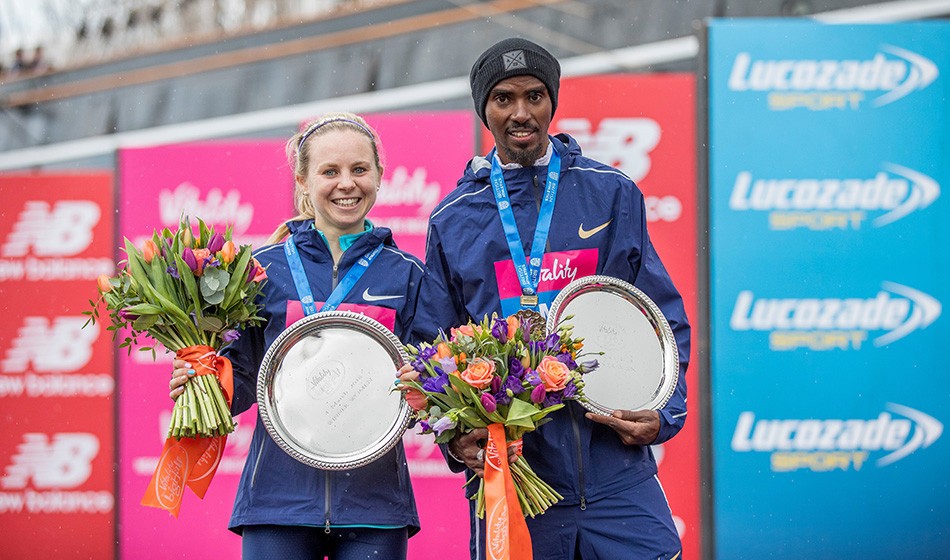 Mo Farah is looking forward to a top-quality test at The Vitality Big Half on Sunday as he continues his preparations for next month’s Virgin Money London Marathon.

Britain’s Chicago Marathon champion won last year’s inaugural edition of the half-marathon event and will again be joined in the UK capital by defending women’s champion Charlotte Purdue, who is also working toward the London Marathon.

Farah ran 61:40 to beat Daniel Wanjiru to the title 12 months ago and the Kenyan is one of two former London Marathon champions and three sub-60:00 half-marathoners in this year’s field as the pair will line up alongside former marathon world record-holder Wilson Kipsang.

Until last month, 2018 London Marathon third-placer Farah was Europe’s fastest ever half-marathon runner with his PB of 59:22 from the Great North Run in 2015. Switzerland’s Julien Wanders has since gone quicker with his 59:13 continental record in Ras Al Khaimah and although Farah believes his performance on Sunday will depend on the course and his competitors, the 35-year-old has his eye on regaining the record at some point.

For now his focus is on a strong race ahead of the London Marathon in seven weeks.

“I would love to be able to run really fast but with the course, it is not ideal to run ridiculously fast but it is possible,” said Farah. “It just depends on what happens with the rest of the guys.

“Sunday’s race will be tough for me but the purpose is to test myself and see where I am.

“My home town – hopefully I’ll get a win but it’s not going to be easy.

“I know I’m going to be racing Daniel Wanjiru and Wilson Kipsang in the marathon so it will be nice to test myself and my training partner Bashir Abdi will be there.”

“Sunday’s race isn’t going to be easy, but I’m very excited…”
Mo Farah is back in London and ready to race the @OfficialBigHalf. Preview, with comment from Farah and @StefApril ➡️ https://t.co/4VSIGARFPV #BigHalf #MovedByLondon pic.twitter.com/qLVkFhlJzt

The event again incorporates the British Half Marathon Championships, with Dewi Griffiths, Andy Vernon, Chris Thompson and Jonny Mellor also among those set to be battling for the podium.

Griffiths was just 11 seconds off his PB of 61:33 when placing eighth at the Houston Half Marathon in January, while Vernon has a PB of 62:46 from 2015 and makes his marathon debut in London next month.

Purdue ran a PB of 69:46 to finish fourth at the Marugame International Half Marathon in Japan last month, while Partridge was runner-up behind her at the 2018 Big Half and has a PB of 70:31 to her name from 2015. Last year’s third-placer Arter ran a Welsh record in Barcelona and is the fastest in the field with her time there of 69:40, which also puts her eighth on the UK all-time list.

Another athlete in form is Twell, who has claimed wins over 3km on the road in Armagh and on the country at the Scottish championships this year.

“I’m really excited because preparation has gone well,” she told organisers. “I know there is a real healthy competition ready.

“Charlotte Purdue ran a fantastic time of 69:46 out in Japan and Charlotte Arter has run 69:40 which are spectacular times for British females at the moment over this distance.

“My PB is a little bit off that and I’m hoping to be joining and holding on to the coat-tails of them if I can.”

The Vitality Big Half gets under way with the elite wheelchair events from 08:55, with David Weir, Simon Lawson, Mel Nicholls and Nikki Emerson among those racing.

The course starts by Tower Bridge and finishes at Cutty Sark, with the route passing through the boroughs of Southwark, Tower Hamlets, Lewisham and Greenwich.

Fans in the UK can watch the action on BBC Red Button and online from 08:45 – 12:20, while a live stream will also be available on the event’s Twitter and Facebook channels.