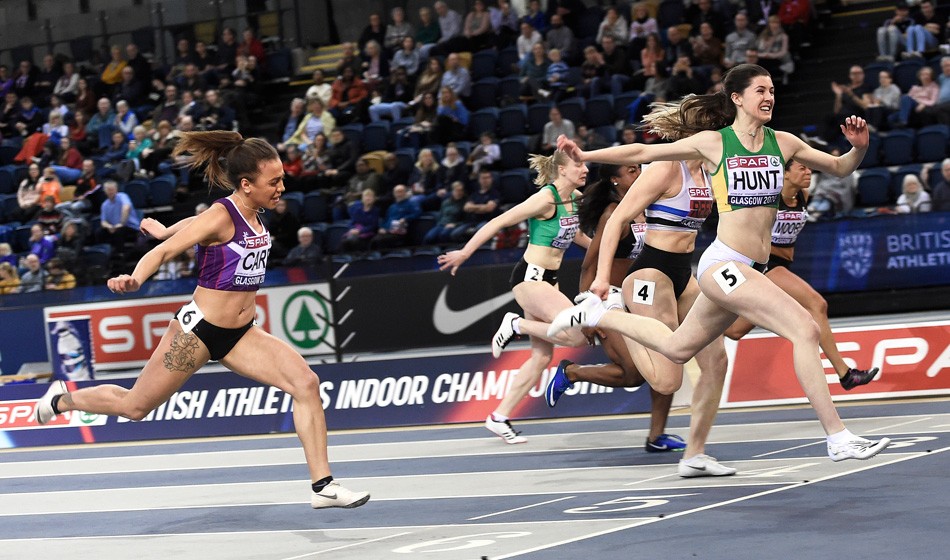 Amy Hunt may be aged just 17 and a British Championships debutante, but the world under-18 200m record-holder took the step up to the senior stage in her speedy stride to secure 60m success in style on Saturday.

After setting her world record last year – a feat achieved in the men’s equivalent by a certain Usain Bolt – Hunt says she became known as ‘the 200m girl’, but in Glasgow the teenager further proved her talent for the shorter sprints too by clocking 7.39 to finish clear ahead of Scottish record-holder Alisha Rees and Ebony Carr of Marshall Milton Keynes.

“I’m not going to be ‘the 200m girl’ now!” beamed the Charnwood athlete, back at the same Emirates Arena where just a week before she had finished fourth in a top-class Müller Indoor Grand Prix race, won by two-time Olympic gold medallist Shelly-Ann Fraser-Pryce ahead of world indoor champion Murielle Ahoure.

“I do love it (the 200m) but to come away with the 60m, it definitely proves to all those people who are like ‘you can’t start’ that I kind of can and my first 60m potentially isn’t as bad as I thought it was.

“It’s massively surpassed my own expectations. It has been an incredible day,” added the Joe McDonnell-coached sprinter. “This is my first time at any British senior championships ever, so to come away with gold against some really incredible girls, it has blown me away. I’m absolutely over the moon.

“This past week has been insane. Being able to race against Shelly-Ann and Murielle last week was one of the most insane, amazing opportunities of my life and definitely an experience that came in handy today. Just maintaining my composure, keeping that cool and staying relaxed.”

Behind her, Rees ran 7.49 and Carr 7.55 to claim respective silver and bronze, while Winter Olympian Mica Moore, who competed in the bobsleigh event at the 2018 Games, finished fourth in 7.63.

After winning her first national title on the senior stage, Hunt’s attention now turns back to her studies, with an A-Level English literature exam the next task at hand.

“I’ve got an exam on Monday that I haven’t revised for!” laughed the double European under-20 champion, who claimed 200m and relay gold in Borås last summer. “It definitely keeps me grounded and level-headed.”

Abigail Irozuru regained the long jump title she won five years ago, adding the indoor crown to her outdoor win from last summer.

With a season’s best leap of 6.60m from the first round, the Sale Harriers athlete got gold ahead of Stoke’s Commonwealth medallist Jazmin Sawyers (6.44m), while bronze was claimed by Blackheath’s Sarah Abrams thanks to her 6.40m leap.

“Opening up with a 6.60m was like ‘phew, I’m not bad, I can actually jump!'” smiled world finalist Irozuru. “And then the rest of the rounds, my pattern in my runway just needs a little bit more consistency and that’s what I’m trying to work on.

“Even though the distances don’t reflect where I am, it gives me a lot of positivity knowing that the processes are working well.”

After multiple national silver and bronze medal wins, Derby’s Yasmin Miller finally got the gold she had been craving as she clocked 8.29 to narrowly take the 60m hurdles title ahead of Shaftesbury’s Jessica Hunter.

Behind them, Blackheath’s 18-year-old Marcia Sey ran a PB of 8.34 for bronze.

“I’m so happy,” said Miller. “The silver medals I have won, about three of them I have messed up in the race because of pressure, I didn’t believe in myself, so this is a huge confidence boost for me.

“I didn’t know that I had won. I dipped for my life to get there!”

After her breakthrough 51.57 win on the same track at the Müller Indoor Grand Prix the weekend before, hurdler Jessie Knight was dominant in the 400m heats, going quickest with her 52.84.

Full results can be found here, with the action continuing on Sunday from 12:00.

» Click here to read about Sophie Cook’s emotional British pole vault win, while a report on the men’s events on day one of the SPAR British Indoor Championships can be found here 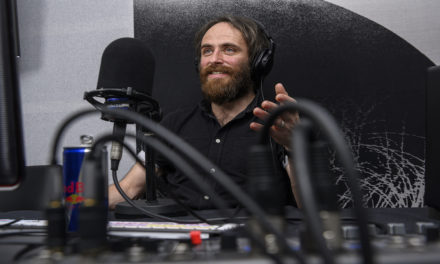 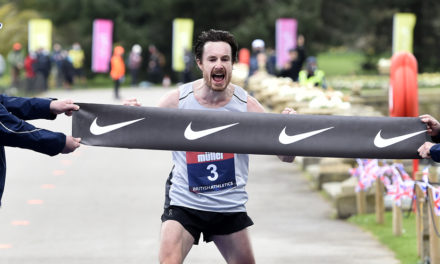