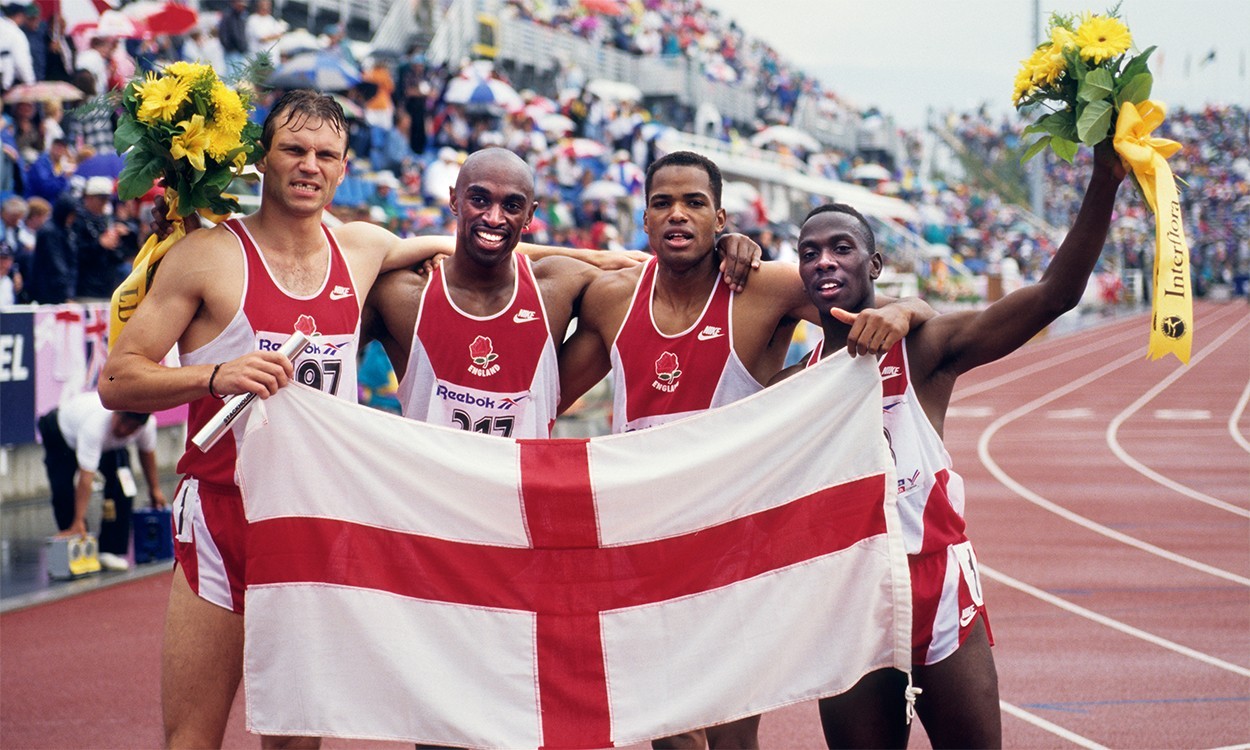 Only three teams ran in the inaugural mile relay in 1930 in Hamilton, won by England, who were anchored by double hurdles champion Lord Burghley. England won again in 1934 in London as the team were anchored by 440 yards winner Godfrey Rampling and they left out silver medallist Bill Roberts. Scotland were last and won a bronze!

In 1938 in Sydney, Roberts was the individual champion, but England were a long way down on Canada.
Australia won in Auckland in 1950 and were anchored by 440 yards gold medallist Edwin Carr. Curiously the relay was the same
day as the individual event and that day England’s Les Lewis won two silvers and a bronze in the 4x100m final.

In Vancouver in 1954, gold went to England, who were anchored by 880 yards champion Derek Johnson. In Cardiff in 1958, though, England were well beaten by a South African team, completed by 440 yards hurdles champion and new world record-holder Gert Potgieter.

There were again new champions in 1962 at Perth as Jamaica, who fielded the Spence twins beat England by a second. Curiously the first four in the 1964 Olympic 800m, including winner Peter Snell, all competed in the relay here.

In Kingston in 1966, another West Indian nation won gold. Trinidad and Tobago took more than five seconds off South Africa’s Games record and indeed broke the world record for the imperial distance with 3:02.8. England took third.

Trinidad had the first two from the 440 yards in Wendell Mottley and Kent Bernard as well as 220 yards runner-up Ed Roberts. Edinburgh in 1970 saw the first metric relay and new champions again through Kenya. They had never previously won medals and hadn’t even entered in 1966, but had been second behind USA’s world record in the 1968 Mexico Olympics. They won by two seconds as 400m champion Charles Asati ran a 44.6 final leg in his tenth race of the Games. England, anchored by 400m hurdles champion John Sherwood, were third.

In 1974 in Christchurch, Kenya were again anchored by 400m champion Asati and won easily from England, who fielded 400m hurdles champion Alan Pascoe as they won their tenth successive medal.

In 1978 in Edmonton, England were first across the line in 3:03.53 but went without medals for the first time. At halfway on the final leg, Richard Ashton, was trailing Kenya and Jamaica and being closed on by 400m champion Rick Mitchell of Australia. BBC commentator David Coleman said: “Ashton has no chance of a medal.” But Ashton left Mitchell decisively off the final bend and kicked past the Jamaican and then caught the Kenyan with his final stride. Sadly, one of Britain’s greatest ever relay legs counted for nothing and Kenya won their third successive gold as it was judged that Glen Cohen had cut across the Kenyan runner on leg three and Britain were disqualified.

England won legitimately in 1982 in Brisbane with Phil Brown outgunning Mitchell on the last leg. Brown again anchored England
to gold in 1986 at a boycott-Commonwealth Games affected Edinburgh. The sadly recently departed Todd Bennett also won his second successive gold as England, who also had 400m champion Roger Black, won in a slow 3:07.19. In 1990 in Auckland, England, Australia and Trinidad were disqualified for standing on the wrong take-over point in the heats. Kenya easily won the final in a record 3:02.48 as Scotland, with three 800m runners and a 400m hurdler, won a surprise silver in a depleted final.

In 1994 in Victoria, England edged Jamaica in a Games record but positions were reversed in Kuala Lumpur in 1998 as Jamaica won in the first ever sub-three. One-lap individual champion Iwan Thomas’s 44.0 fi nal leg ensured Wales won their first ever medal.

In 2002 in Manchester, Jamaica’s Michael Blackwood led until late and then was passed by England’s Daniel Caines and a charging Matt Elias from Wales. Blackwood dropped the baton as he was passed and jogged in fourth but was disqualified as England won by a hundredth of a second.

There was more home joy in 2006 in Melbourne as Australia won easily with England fourth. In Delhi, Australia retained their title as a weakened England did well to get bronze.