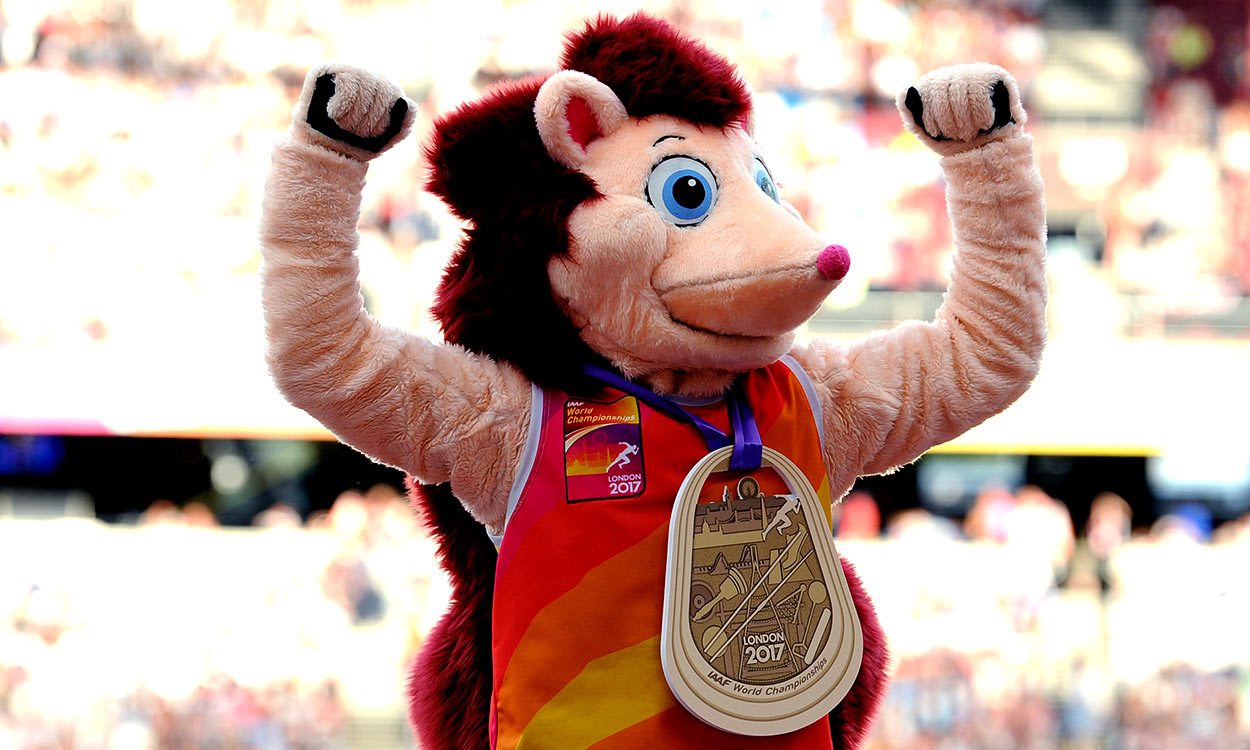 Jess Judd did not win a medal or even reach a final but her aggressive running and British bulldog spirit in her 1500m heat created a ‘go for it’ tone for the rest of her GB team-mates to follow. The 22-year-old was the first track athlete to compete for the host nation on the opening day of the championships and gallantly led a field that included world record-holder Genzebe Dibaba and Caster Semenya before ultimately fading in the home straight to sixth place and the final automatic qualifying spot. Unfortunately, the effort left her spent for her semi-final, but the next day she showed her patriotism, enthusiasm and London 2017 spirit when she was spotted roadside at Tower Bridge cheering on the marathoners.

Kori Carter made a name for herself not only for winning the women’s 400m hurdles but for producing the most memorable introductory wave to the crowd in athletics history. Her ‘game face’ smile-turned-glare just before her semi-final went viral on social media and turned her into a star even before she took to her marks in the final.

When your girl waits until your friends leave before getting mad at you pic.twitter.com/SgD1YC4GlX

London 2017 was full of shock results but none created more of a stir than Justin Gatlin winning the 100m title ahead of Usain Bolt. A surreal few minutes firstly saw a streaker bursting on to the track just before the race began. Then Gatlin and US team-mate Christian Coleman pushed Bolt into third in his final individual track race. Jeers and cheers rained down from the stands as the 56,000 spectators firstly showed their displeasure at the American’s audacity to ruin Bolt’s farewell party and then began clapping in acknowledgement of the Jamaican as he was interviewed trackside.

Day six of the World Championships was relentlessly rainy but one bright moment involved Karsten Warholm storming to victory in the men’s 400m hurdles. The 21-year-old sprang a surprise on hot favourite Kerron Clement and then celebrated with a post-race facial reaction of pure shock. Later, he wore Viking horns through his interviews and told reporters the weather didn’t bother him as it remined him of a nice summer’s day in his native Norway.

Karsten Warholm enjoying the spotlight. Asked were the conditions tough? "It was like a good Norwegian summer!" #IAAFWorlds pic.twitter.com/evDqObXP05

Last year Shaunae Miller-Uibo dived across the finish line to beat Allyson Felix to Olympic 400m gold. This time in London she was involved in another bizarre finish as she appeared to stub her foot into the ground in the closing metres, lost her momentum and faded from first to fourth. “A lot of people thought I hurt my hamstring or something along that line,” said the tall Bahamas athlete on her Devon Loch-style collapse, “but it was kind of weird, I had the race under control and I looked up at the screen and misplaced my foot and completely lost balance.”

The triple jump clash between Yulimar Rojas and Caterine Ibargüen was, for me, the most exciting head-to-head of the championships. The sassy and colourful South American duo swapped the lead during the contest with the previously invincible Ibargüen of Colombia finally succumbing to her younger rival from Venezuela by just two centimetres. It was a positive boost for Rojas’ country, too, given the huge political and economic upheaval going on there right now.

Pierre-Ambroise Bosse emerged as one of the personalities of the championships following his 800m victory. The Frenchman blasted to two-lap glory and then entertained everyone with his post-race interviews. This included comparing his race strategy to placing a bet in a casino and how he “cast a spell like a witch” on his rivals in the last 100m. His interviews were also laced with comments about chasing girls, although he later tweeted a photo of himself sleeping with his gold medal.

Described as the most shocking (in a good way) US distance running result since Billy Mills sprinted to Olympic 10,000m gold in 1964, the one-two in the women’s 3000m steeplechase courtesy of Emma Coburn and Courtney Frerichs caused the American fans in London to go apoplectic. After a crazy race that saw Beatrice Chepkoech forget to hurdle the water jump, plus a mid-race pile up that took out a few contenders, the US duo beat the supposedly-unbeatable Kenyans by using a pincer technique to move past Hyvin Kiyeng entering the home straight. “Race of the championships!” screamed the Americans, but many non-Americans agreed too.

Even if you’re not a fan of mascots, it was hard not to warm to Hero the Hedgehog, who became a symbol of London 2017 with his antics and athleticism. Hero enjoyed many memorable moments but the one that sticks in the mind most is the steeplechase stumble (accidentally on purpose, surely) that led to the most painful landing in track and field history.

Keep your eyes on Hero tonight ?. This weekend was just a warm up. #BeTheNext mascot pic.twitter.com/ls9OVud1vT

10. Glamour on the roads

Not everyone could get tickets to the Olympic Stadium, so it was good that people could watch marathons and race walks for free on the streets. Holding the start and finish of the marathons on Tower Bridge and the race walks on The Mall was an inspired decision, wasn’t easy to get the go-ahead in the capital and ended up being blessed with great weather and competition.

Isaac Makwala was at the centre of one of the biggest and strangest stories of the championships. Conspiracy theories ran wild when the Botswanan sprinter missed his 400m final showdown with Wayde van Niekerk plus his 200m heat because, apparently, the IAAF wanted to quarantine him to protect other athletes from the virus he had. Problem was, Makwala denied being ill and accused the IAAF of keeping him out of the stadium to ensure Van Niekerk won. Eventually the IAAF let him run a solo 200m time trial to qualify for the 200m semi-finals, but in the subsequent final he was drained by the emotional rollercoaster and faded to sixth.

As British relay medals rained down on the final weekend, one stood above all others – the men’s 4x100m gold. Past global relay victories such as the men’s 4x400m win in Tokyo 1991 and the 4x100m gold in Athens 2004 have become the stuff of legend, so you can guarantee CJ Ujah, Adam Gemili, Danny Talbot and Nethaneel Mitchell-Blake will still be getting asked about their terrific 2017 triumph for years to come.

The Americans have been near-invincible in the women’s sprint hurdles lately. They swept the podium places in Rio last year and an athlete who wasn’t even in the US team, Keni Harrison, broke the world record. So for Sally Pearson to return from serious injury was quite something. To make the moment even more special, she did it in the same stadium where she won the Olympic title five years earlier.

The biggest race of the championships when it came to sheer numbers taking part was the media 800m. It featured writers, photographers, camera crew and PR people from around the world, including four reporters from AW. None of the really big name ex-athletes working in the media in London, like Steve Cram or Steve Ovett, did it, although they would have been hard pressed to beat the fastest man of the day, Cathal Dennehy of Ireland, who won one of the 17 heats in 1:54.54.

Mo Farah’s 10,000m win on the first day of the championships was described as the most impressive and hard-fought of all this titles. He ended the race battered and bruised and with another gold medal. Yet he gained just as many admirers for the gallant way he went down on his sword in the 5000m final a few days later. Up against an Ethiopian team who had finally got their team tactics right and against a man, Muktar Edris, who was fast enough to pop out a 52-second last lap, Farah wound up second, but he fought every inch of the way to make sure he won silver not bronze and showed great sportsmanship in praising the new champion.

Jamaican sprint legend Usain Bolt was not at his best in 2017. He finished ‘only’ third in the 100m, did not contest the 200m and then pulled his hamstring in the 4x100m. But that did not stop London congratulating him on a great career and the spectators relished seeing him run for one final time, while the lap of honour he went on at the end of the championships was truly the end of an era.

The idea for a small number of Russian athletes to compete under a neutral flag has proved a great idea. The popular Sergey Shubenkov took advantage of the opportunity by nearly retaining his sprint hurdles title as he won silver behind Omar McLeod of Jamaica, while Mariya Lasitskene went one better and took high jump gold. No one doubted that these athletes were clean and they were applauded like everyone else.

The host nation team finished just outside the medals in fourth place a total of five times. Of these, perhaps the most spectacularly successful was Dina Asher-Smith in the women’s 200m. The 21-year-old was kaput with a broken foot earlier this year and when she belatedly began her summer season she was short of fitness and nowhere near her best form. But talent prevails and by the time London rolled around she was sufficiently into her running to be a medal contender. She fell narrowly short of a podium place, but demonstrated she could have won one with a injury-free build up.

Another Brit who finished fourth – and who is surely destined for the podium one day – was Kyle Langford. A real-life Alf Tupper (his parents own a chippy in Watford), the 21-year-old’s storming finish almost nicked him a medal. Not only is he a fine athlete, but he has a likeable and interesting personality as well and the description of his race tactics was one of the memorable quotes of the week. “My coach told me to hold back and then take out my rivals like a sniper,” he said.

Kyle Langford explains how he took out his rivals "like a sniper" in the world 800m final at #London2017 https://t.co/5ihtxMBlE2

The athletes and action aside, the World Championships would not have been a success without all the people in the London Stadium. Most of the sessions saw a full house of 56,000 and the noise was, at times, similar to the roar from London 2012. As IAAF president Seb Coe noted in his end-of-championships press conference, a great atmosphere in the stadium is vital and the baton now passes to Doha as the Qatari capital has the challenge of trying to match London in two years’ time.