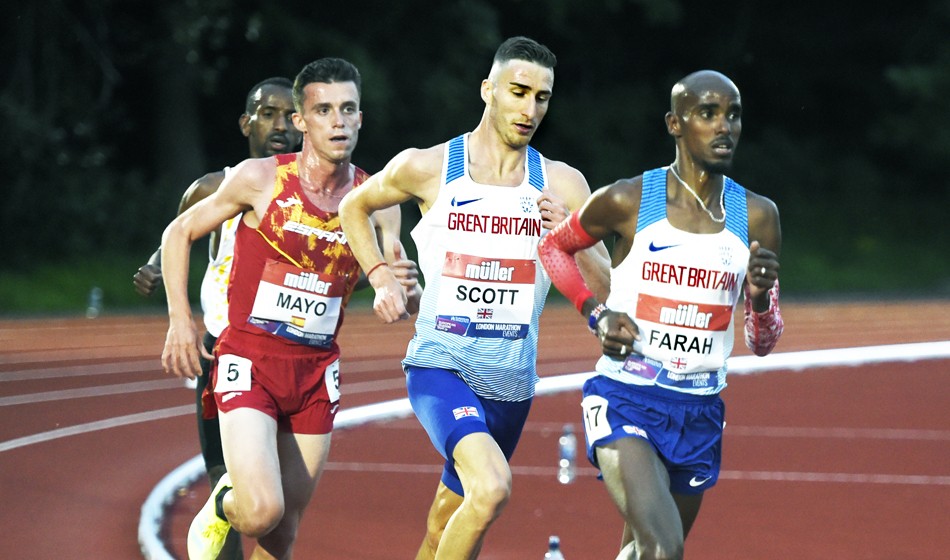 Rarely has a seventh-place finish been so celebrated and richly significant. When Marc Scott crossed the finish line in the Müller British 10,000m Championships and European Cup in Birmingham on Saturday (June 5) he spread his arms triumphantly. The winner, Morhad Amdouni of France, may have been almost half a minute ahead but, for Scott, the most valuable scalp on the night, Mo Farah, finished a vital one second behind.

“Job done,” said Scott moments after beating Farah to the British title and, in doing so, sealing selection for the Olympics. The four-time Olympic champion, meanwhile, disappeared briefly down the back straight to lick his wounds and gather himself before returning, impressively, to do his post-race media duties.

As head-to-head showdowns go this duel for the British title in the Edgbaston area of the UK’s second largest city was a messy affair. With two Frenchmen, two Spaniards, a Belgian and German ahead on the night, it was a race within a race and easily the most intriguing sub-plot on the night.

Scott became the first athlete for 10 years and the first Briton ever to beat Farah at 10,000m. It was symbolic and with Farah now aged 38 surely marks a changing of the guard.

This was the first trials race that Farah had done since the 2010 Inter-Counties Cross Country Championships. On that occasion he qualified for the World Cross Country Championships in Poland. Coincidentally, that trials race was also in Birmingham – at Cofton Park in the south of the city – and as a further coincidence a teenage Scott placed 21st in the under-17 men’s race that day in the colours of Richmond & Zetland.

Much has happened since that day 11 years ago. Farah has won 10 global track titles and broke the British marathon record with 2:05:11 to win in Chicago in 2018 before moving back to his more natural home on the track. As for Scott, he went to study at the University of Tulsa before joining the Nike Bowerman Track Club in Oregon where he is coached by Jerry Schumacher and lives and trains with Olympic 1500m champion Matt Centrowitz.

The duo had only met in races twice before, too. At the Diamond League in London in 2017 Farah won the 3000m in 7:35.15 as Scott was 12th about eight seconds behind. Then, last September in Northern Ireland, Farah won the Antrim Coast Half-Marathon in 60:27 with Scott runner-up just 12 seconds back.

As Farah has undoubtedly slowed a little in recent years, Scott has been on the upward curve and, among other things, in February went No.2 on the UK all-time 10,000m rankings with 27:10.41 in California. The stars, it seems, were perfectly aligned for a battle royale on Saturday night with Scott confidently telling the media pre-race that he was ready to take down the long-time British No.1. 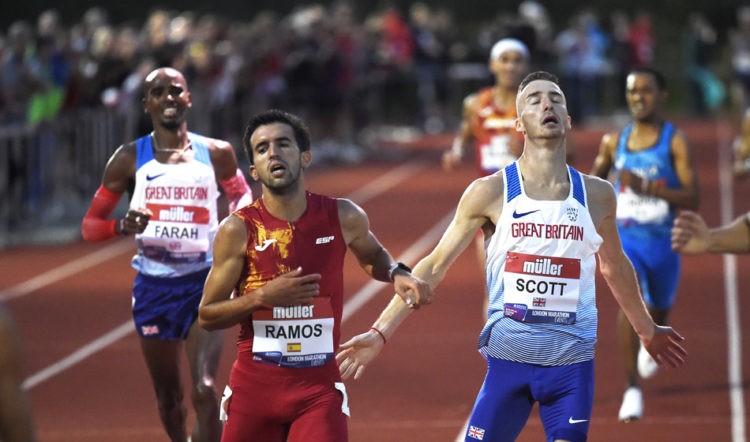 All the ingredients were in place for a great meeting. Unlike Parliament Hill there were no spectators, which is just as well, as it still ended up being a relatively busy arena due to the events staff, a limited number of student volunteers, coaches and dozens of athletes (40 in each race) who were warming up in the centre of the track.

The weather was great and the track, which was built in recent years on some water-logged rugby fields that are owned by the nearby King Edward’s School, was in pristine condition with what little wind there was sheltered by trees that surrounded the arena.

As Farah and Scott were into the final stages of their warm-up, Eilish McColgan won a tremendous women’s A race. Taking victory in the final strides and sealing Olympic selection along with team-mate Jess Judd, it set the tone perfectly for the men’s race that followed.

Usually Farah settles into longer races in the middle or back of the field. Maybe this is a sign of confidence. However on Saturday he began more enthusiastically, going with the pacers to start with.

The pacemaking was both hi-tech and human, with Wavelight Technology complemented by Sean Tobin and Dave McNeill. The pace rumbled along relentlessly with Amdouni primarily following the 27:20 tempo and Farah and Scott a few metres adrift but working hard not to become too adrift of the leader.

Mid-way though the race Scott began to lose contact with Farah and the British duel looked like it was prematurely over. But Scott was simply going through a bad patch and, with trademark Yorkshire grit and determination, managed to wrestle his way back into contention.

Meanwhile another Yorkshire runner, Emile Cairess, was enjoying a great run too. Advised by Alan Storey – the same coach who masterminded Chris Thompson’s Olympic marathon trials win – Cairess would eventually run a PB of 27:53.19 to finish less than three seconds behind Farah despite having been ill with the coronavirus about 10 weeks earlier. 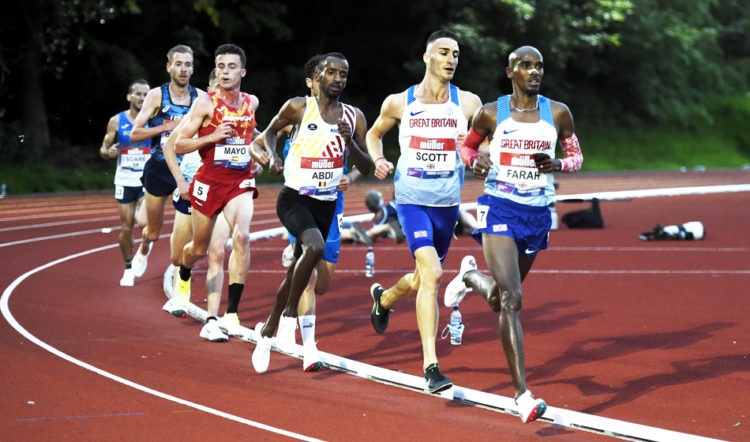 As for Scott, he began to dramatically regain lost ground on Farah in the closing stages and, buoyed by the prospect of winning the British title, he dug deep into his reserves to kick past the Olympic champion in the home straight to achieve his goal despite the bewildering sight of multiple lapped runners and the half-dozen Europeans who were ahead doing their best to confuse the visual spectacle.

Job done indeed. So what now for Scott?

He has his eye on the Müller British Championships on June 25-27 where he hopes to qualify for the 5000m as well. Based at home in Northallerton in recent days, he will make a decision over whether to fly back to the United States to join his Bowerman TC team-mates for a spell. The 27-year-old also finished the race feeling a little battered and bruised, so this will also be in his mind ahead of the ‘main British Champs’.

For Farah, he was reportedly in good shape until about 10 days before the race when an ankle problem and mild illness conspired to scupper his chances. His injury aside, there are rumours he didn’t feel well following a vaccination and this may have left him underpar although the athlete seemed keen on the night not to make excuses.

Two questions remain: will he have the stomach to attack the qualifying time before the June 27 deadline in an event as gruelling as 10,000m? And, if so, where?

Leiden on June 12 is one option. There are other events as well such as the Midsummer Night 10,000m Classic in Leeds on June 24. Given Farah’s status, there could be an idea to create a race for him too. Or, as unlikely as it seems, he could drop down in distance to tackle the 5000m at the British Championships.

Whatever he decides, his chances of successfully defending his Olympic 10,000m title against world record-holder Joshua Cheptegei in Tokyo look slim. Still, he showed in Birmingham that he does not like to go down without a fight.

Like a true champion he gave Scott his best shots but was ultimately floored by a younger and hungrier runner on the rise.