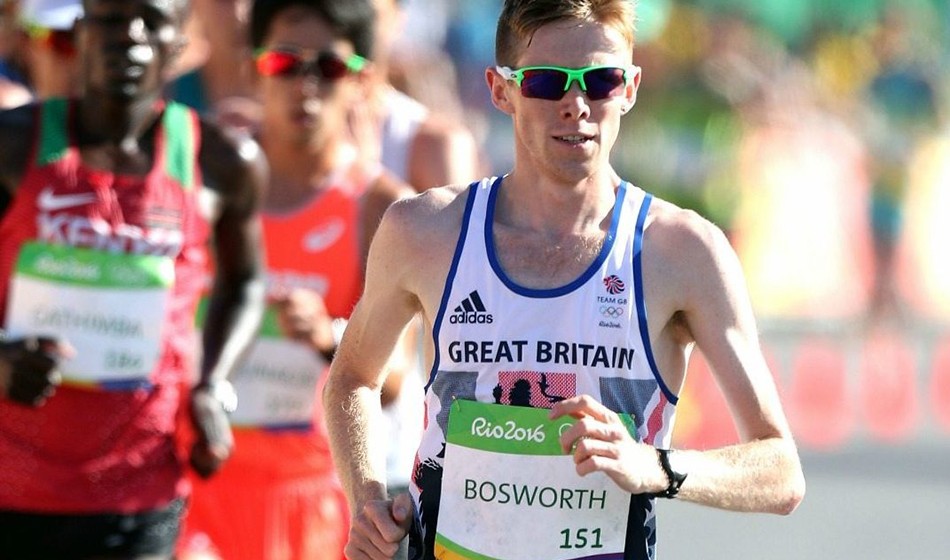 Tom Bosworth has voiced words of coronavirus warning to athletes after his recovery from the illness was prolonged by an understandable eagerness to get back to training.

The multiple world race walk record-holder went from setting back-to-back British records to struggling to even do a spot of gardening after he contracted Covid-19 in March. Only now is he back to full training and the 30-year-old hopes that by sharing his story, his fellow athletes might benefit from the advice.

“It was a Saturday evening,” Bosworth recalls, reflecting back to March. “I was on a Zoom call with a friend at around 8:30pm and I said ‘do you know what, I’ve got to go to bed, I feel totally awful’.

“I had done a great week’s training and I was due a rest day the next day anyway, so I just put it down to training. My joints were aching, my body was throbbing. I woke up and I had this headache right behind my eyes and it was agony. That was one of the worst things I remember to this day. Rolling over in bed I was like ‘flipping heck, have I got this? Have I got Covid?’

“Harry (Bosworth’s fiancé), about 72 hours earlier, had come down with the same things and I was giving him stick saying ‘oh you’re just sick, you haven’t got Covid’, and then as soon as I got the symptoms it was like ‘yes, definitely Covid!’

“Then the cough started, a real dry cough. We were both eating dinner one evening and I couldn’t taste or smell it at all. It wasn’t that my taste or smell had changed, it had just gone completely.

“That was over the course of about a week, 10 days. We started to recover and then it was just the fatigue.”

“Rolling over in bed I was like ‘flipping heck, have I got this? Have I got Covid?’”

Bosworth had been in the form of his life at the start of the year, clocking 18:20.97 to win the 5000m race walk in a national record at the British Championships before another British record of 39:10 outdoors over 10km at the beginning of March.

“By the beginning of May I started training again,” Bosworth continues. “I had done three weeks of training and I still had that underlying fitness from March. On June 2 I did about three miles in the morning but it was taking a long time and hurting a lot! The next day I did 2km – 1km out and back – because it was agony. I knew there was something really wrong.

“We lost all of June. I didn’t do any training in June and then just some light training in July, easing my way back. At this point mentally I was exhausted – from being ill, then getting back to training, going off again and then back into training. Racing seemed like a long, long way away.

“It did start to get better through August but I think my head was just gone. My motivation had gone, my body wasn’t right still. We called it a day in August.”

“The virus isn’t going to go anywhere, even if we do get a vaccine or better testing and that sort of thing – there’s still a chance you’re going to catch it,” Bosworth adds. “God forbid if somebody catches it a month out from an Olympic Games – you’re not going to stand much of a chance of competing, which is terrifying.

“You have your symptoms, which is quite a short stage, then you’ve got a period of time where your body is recovering and that’s the key bit. I didn’t leave it long enough. When you feel okay, you’ve got to leave it another two weeks. Allow your body to get used to feeling okay again.

“I was sick during lockdown so we were still spending time in the garden doing gardening and really basic things, but they were taking a lot out of me. I was noticing I felt really unfit even though I felt normal. It was quite strange.

“You’ve got a period of time where your body is recovering and that’s the key bit. I didn’t leave it long enough”

“As soon as I started to feel a bit more normal, I started to go back to training and things just weren’t right.

“Now if we’re in the season there and you’ve got two or three months still until a big race or something like that, you have enough time to recover. But an extra week’s recovery during that period could be crucial to then being able to get back to normal rather than getting back to normal, doing some training and then having to take further time off because your body wasn’t ready and you’ve actually sent yourself backwards, almost back to the start of the recovery period again.

“I would just say rest. It’s the worst thing for an athlete, they don’t want to hear that, but it will be the best thing you can do. Just rest. Keep active but just give your body a chance.

“I was so desperate – I had come from a place where I had set back-to-back British records and world leads and that sort of thing, to being completely unfit – so I was desperate to get back there as quickly as possible and all I did was hinder the rest of the summer.”

» You can read more from an interview with Tom Bosworth here, as he talks about targeting a 2022 treble, and in the AW Clubhouse here, where AW subscribers can read about his return to training