Tirop’s angels on a mission to end gender-related violence 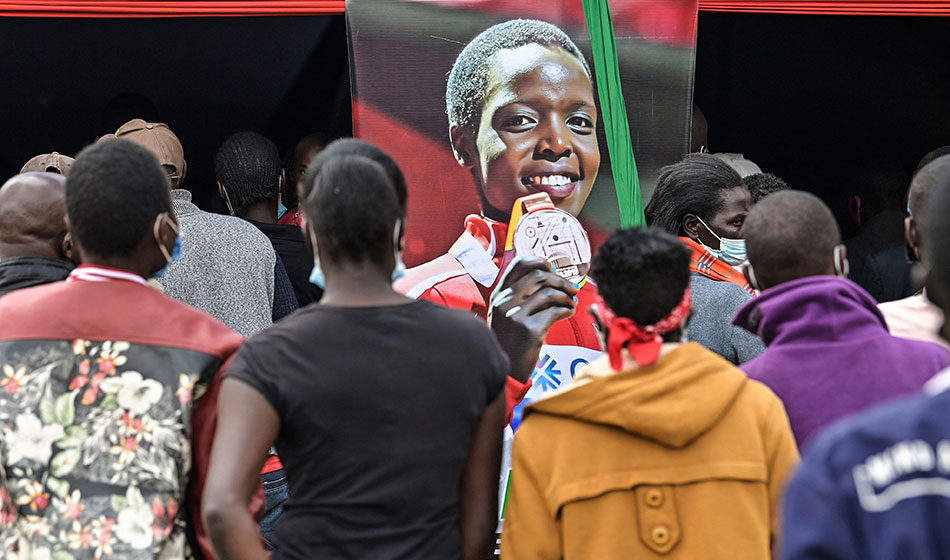 Following the death of world record-holder Agnes Tirop, Viola Cheptoo explains why she’s working to honour the memory of her late friend by confronting the Kenyan culture of violence toward women

The voice might be travelling through the online ether from Kenya, but it is imbued with a level of emotion so thick it feels as if you might be able touch it.

Viola Cheptoo (Lagat) is talking about her late friend Agnes Tirop, the 25-year-old world record-breaking athlete who was found stabbed to death at her Iten home in October of last year. It is a tragedy which has become a driving force.

“When Agnes passed, her mum said to my husband: ‘Please allow me to have Viola as a replacement for Agnes’,” says Cheptoo. “It’s hard for me to hear that from a mother who just lost their daughter. I don’t know what she saw in me but that keeps me going. I will always run for Agnes.”

The woman who finished sixth at this year’s Boston Marathon and was second in New York last November is doing a great deal more than simply running in memory of someone who “was like a sister” to her, however. She is trying to change the scarcely believable culture which still exists in her country and holds women in the lowest esteem.

Tirop’s husband, who police said tried to flee the country, was arrested and has pleaded not guilty to his wife’s murder. At the time of writing, he is still awaiting a bail hearing. 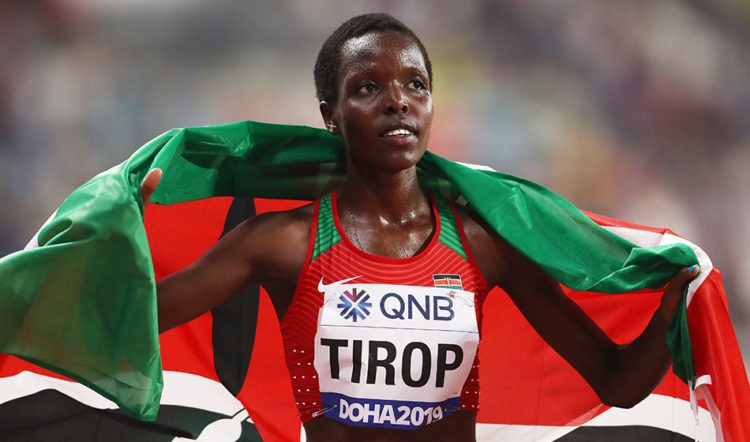 While the incident sent shockwaves across much of the world, it is a sadly familiar tale not just in Kenya, but across East Africa.

In some cases young athletes are preyed on by individuals who have spotted a quick way to make money and will promise the world – offering to be their coaches and, often, becoming their husbands. The threat of abuse is never far away, however.

Cheptoo eloquently, but alarmingly, describes the societal attitudes which are the reason why she and a group of fellow Kenyan athletes, including Mary Keitany, Joan Chelimo and Carolyne Jepkosgei, have formed Tirop’s Angels – an organisation with the aim of ending gender-based violence.

“From the evidence of our friends who are still training in Iten, there are some athletes who are going through the same thing that Agnes was going through, so we want to prevent this escalating to somebody else losing their life or getting hurt,” she says.

“Nobody thinks it is a problem for a man to be hitting a woman. I used to ask my mum ‘why is my dad hitting you?’ and she would say ‘that’s how men discipline women’.

“It’s how men are taught by their elders – that if a woman does something wrong, you have to put her in her place. It was taught to me that men use it as a way of controlling women.” 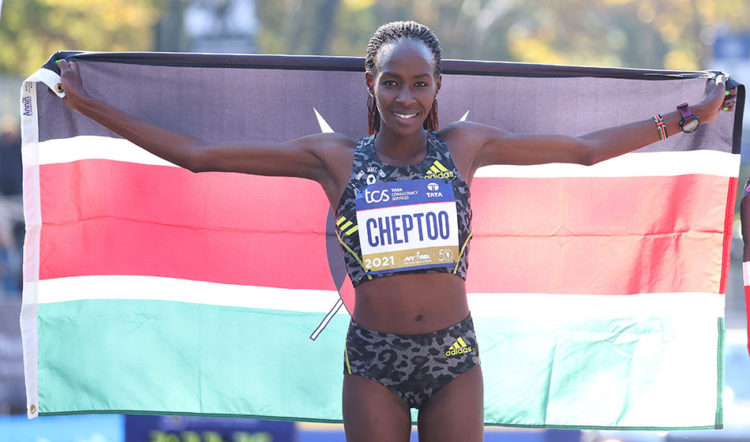 The degree to which these practices are enmeshed was underlined to Cheptoo during a recent workshop with a group of young athletes.

“Even for the young men, nobody thought that it was a problem,” she says. “The guys didn’t even understand what we were talking about when we asked them ‘do you understand what gender-based violence is?’ To them, it’s not a big deal.”

To go about enacting the kind of change needed, Tirop’s Angels needs help – and not just from females. Some male athletes have come on board, but there need to be more.

Distance running great Haile Gebrselassie has offered his support and highlighted an even more concerning thought. In Kenya, the press have the freedom to report these incidents, but that is not the case in Gebrselassie’s home nation of Ethiopia. The worry is that more athletes are suffering in complete silence.

“He told us that Ethiopians are probably going through even worse cases than here in Kenya,” says Cheptoo, who has also been approached by women from Israel and Chile. “He was telling me a lot of these big athletes who have achieved so much are going through the same.

“We need support. We have to win over men and bring them on board with us. We know it’s going to take time but, if we don’t start it now, we’re never going to achieve the goal of ending it.

“Even when Agnes passed there were a lot of men who were not making noise about it.

A little bit is not enough, though.

“We’ve had people reassuring us that they are with us, but speaking out is different and that’s what we still need. We need to hear them making noise to say we need strict laws in Kenya that would protect girls and women. Some men go through it but I guarantee you almost every single woman in Kenya will go through [some sort of] a defilement or physical abuse and mental abuse.”

“My dad would come home drunk and he would fight my mum and all of us in the house,” she recalls. “It wasn’t a good experience for me growing up.

“I feel that somebody should have stood up for my mum, but no one was able to do that because nobody knew better. Everybody thought it was okay and it was all over the place. My neighbour would be screaming and crying for help then, the next day, it would be my mum.

“Women are being told, from their mothers or grandparents, to stay because marriages are held on a high level in society and for a family to stand together to be together and to be strong. In Kenya, all the work is being put on the woman’s side and that’s a lot of pressure. They are afraid to walk away because they feel that they’ve failed in their marriages and also they’re failing their families.” 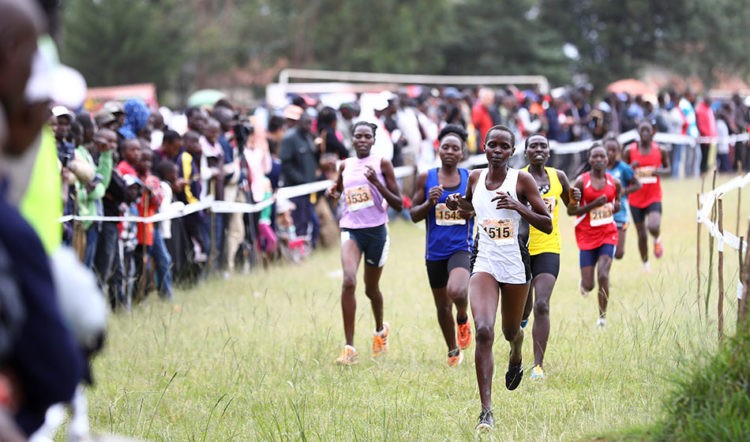 There, literally, has been no way out. Tirop’s Angels aim to change that, too. They have some local government support, but also assistance from Adidas and legal help. The ambitions stretch to being able to provide safe houses for women if they feel they are in danger, not to mention the provision of counselling and the creation of a helpline.

Cheptoo knows that will all take time, however, and for now the priority is educating the younger generations in a bid to break the cycle. There is also a pressing need to help young women identify the warning signs and avoid falling into some exceptionally dangerous traps.

“In a lot of cases with professional athletes, they get married to the wrong people,” she says. “Women are now more successful than before and people who have the wrong intentions will look at an athlete as a quick way of getting cash.

“Unfortunately, a lot of women are falling for people who take advantage of them.

“I see a lot of it here in Kenya. Professional athletes, especially women, accumulate a lot of wealth then, all of a sudden, somebody pretending to be a husband or a coach ends up controlling all the assets that she has acquired. From there, they have no control of their money.

“They start really young. They go to [training] camp, some of them pretend to be junior coaches, and they go to villages and they identify these young kids who can run.

“They know if they manipulate them and tell them ‘I want to be your coach, I’ll get you races and you’ll make a lot of money. I’ll get you an agency, you will be signed with a shoe company and you will be so rich’.

“That is everyone’s dream here in Kenya. If somebody promises you that you will believe it, especially if you have the talent to do it. We’re trying to make sure that our young girls are not falling into the wrong arms.”

With a mountain of such difficult work to do, there is great weight to Cheptoo’s words. It lifts, however, when the subject comes back around to remembering her friend – an athletics talent who won two world 10,000m bronze medals and seemed destined for so much more. 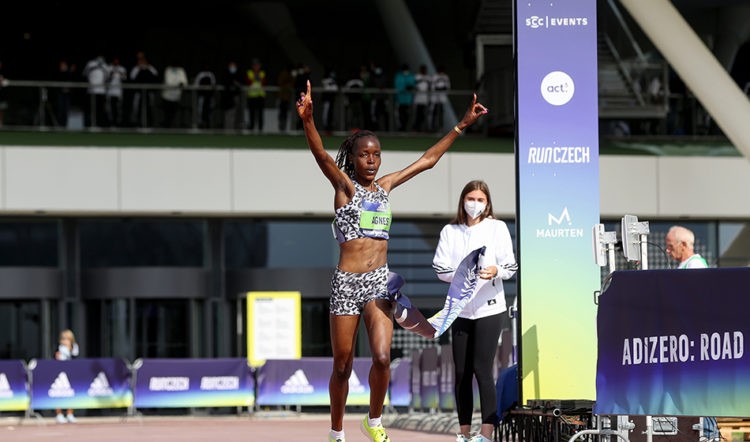 “I didn’t know what Agnes was going through, even when we were in Germany last year [when Tirop broke that 10km world record last September]. I was with her when she came in at night, we were just hugging and laughing. Agnes wouldn’t say a lot but she would smile and make you feel good in her own way.

“She would only talk about running – she didn’t talk much about her personal life.

“I looked up to her. She was much younger but she had achieved so much and I knew there was a lot to come. I’m hoping that I will really make her proud.

“We need to make sure that nobody else goes through this and I’m sure she will be happy knowing that we stopped it. It had to be painful, but there had to be a wake-up call for all of us.”

» This article first appeared in the June issue of AW magazine, which you can buy here