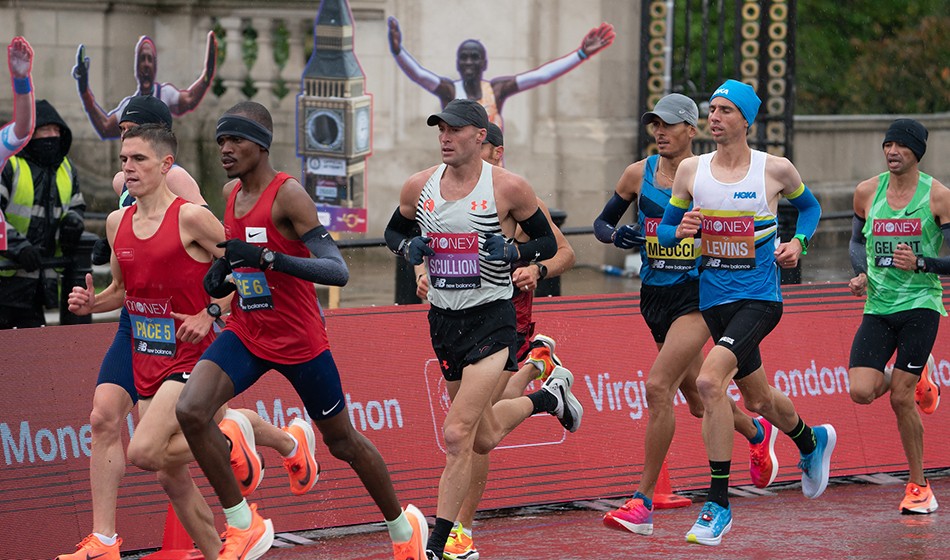 From the ice-capped mountains of Flagstaff and Font Romeu to the streets of Teddington, Stephen Scullion has hunted high and low for success as a distance runner.

He found it last month when he set a Northern Ireland record of 2:09:49 in the Virgin Money London Marathon. Such were the grim weather conditions, though, his main goal was to simply finish.

The Belfast-born athlete says he felt “terrible” right from the start in London on October 4 with not only cold and wet conditions but a troublesome quadriceps injury and sore hamstrings.

Unless he’s had too many drinks, that is. Back in July he announced his retirement with a drunken late-night tweet after the frustrations caused by the coronavirus-hit year got too much for him. It is not the first time he’s quit the sport either, although on this occasion he quickly realised few other professions would offer much security in 2020 and he reversed his decision and bought a flight to Font Romeu in the French Pyrenees for a six-week altitude training camp.

It was there that he built the foundations for his superb run in London, not to mention a Northern Ireland half-marathon record of 61:08 in Antrim in September. Training partners included Ben Connor and Andy Butchart, plus Mo Farah, who ended up pacing in London.

In one of their early runs, Farah glanced up at Scullion and told him he thought he had retired. Scullion replied to say it was true but that he was a few days into his comeback.

What’s more, Scullion was dropped by Farah and others in their first long run in Font Romeu and he estimates they covered 24 miles and he managed only about 16 miles. But soon he got into his stride and his undoubted talent began to emerge.

49 more days up the mountain and my goal for @londonmarathon is simple, to run faster than I ever have. This camp is all about learning to be uncomfortable, and keep pushing long after my body / mind wants to give up. Sounds easy.. it’s not. 📸 @andybutchart #altitude #marathon #running #fitness #animal

Scullion, who turns 32 this month, is an enigmatic character. Articulate, intelligent but also unpredictable and with a tendency to go off the rails, during one of his previous mini-retirements he even started smoking in addition to sinking pint and pint of Guinness.

Ordinary runners can listen to his trials and tribulations via his popular ‘Road to Tokyo’ podcast. It is a warts and all account of life as an elite athlete. He wears his heart on his sleeve in such a style that runners of all levels can relate to the challenges his faces when it comes to, for example, resisting junk food or opting for a good night’s sleep instead of a night out on the town.

Still, he knows when he goes to training camps in an environment like Font Romeu or Flagstaff, he is there to work. “Most of us weren’t that fit either to begin with,” he says of the Font Romeu camp in the summer, “but we were all in the same boat. The weather was gorgeous. There was a nice atmosphere. Camps like that are rare.”

Returning to sea level, he realised he was in the best shape of his life. After one particular tempo run in Teddington in late summer, he remembers he had an “oh shit moment” when he was running 4:50-55 mile pace with a relatively low heart rate. At that point he realised 2:07-08 was on the cards in London.

“I kept a lid on things emotionally and tried to get to the start line feeling as fresh as possible,” he says. However the decision to race the Antrim Coast Half Marathon four weeks before London was not a wise one with hindsight.

“Did it help or hinder preparations for London?” he asks. “It absolutely hindered it. It was brilliant for my confidence and I had a brilliantly enjoyable day but I ended up with a quad injury and really tired hamstrings. However I couldn’t risk not doing the half-marathon knowing what great shape I was in and given how uncertain I thought London was.”

Forced to take three days off training to rest his quad in the penultimate week before London, Scullion says: “There was a lot going on. It was very stressful.”

Back in 2016 he had suffered a quad tear in the same area 10 days before the London Marathon and the memory of this was coursing through his mind as the 2020 race was about to get underway in St James’s Park.

In London four years ago he battled the pain and finished in agony in 2:20:39. He feared a similar scenario in London this time but thankfully it held out.

Scullion often talks about adopting an ‘animal’ mentality and he practises what he preaches in big races by gritting his way through them come what may.

“I’ve developed this animal (reputation) and unwillingness to give up,” he says. “So I thought ‘what are you doing? You don’t give up!’ On a day like London when it’s wet, you have shallow breathing, your quad and hamstring hurt, 99% of people in that situation might give up but I’ve developed this reputation not to give up.

“If that means running 2:20 then I’ll do it and do it with a smile on my face. That’s what’s important to me. That’s what I live for – not quitting.

“The result in some ways doesn’t matter to me. All I think I really care about deep down is that I tried and in the build-up did everything I possibly could to being correct and then on race day I tried whatever’s thrown at me – injuries or bad weather – and if it gets tough then I try again.”

In the race he felt cold and uncomfortable in the early stages but gradually got into his groove. “It was strange,” he remembers. “I began to think ‘I only lost four seconds this lap – that’s quite cool’. Then I thought the lap felt quite short. I don’t know how it happened but it turned into a pretty positive experience.

“You have to find ways to keep yourself in the fight. Stephen Scullion was never going to give up.”

He continues: “If I was going to give up I would have given up in 2016 when I ran on a quad tear when every time my leg hit the ground it cramped up. I passed the athletes’ hotel too at 14 and 22 miles (at Tower Bridge) on that occasion and it was literally as if the hotel was calling me ‘Scully! Scully!’ and I still didn’t give up that day. Quitting is not in my nature.

“It’s not because I’m super tough, confident or positive all the time. I just learn how to cope with my own psychology and to know how to sometimes give it a wee nudge.”

After London he was toying with the idea of running Valencia Marathon in December but he is likely to focus on training hard now until Christmas instead. Then Tokyo beckons.

“The Olympics is a big target and it’s probably fate now for me to put a plan in place for it and I’m in a much safer place when it comes to selection,” he says, on the likelihood of being picked for Ireland. “Then I’ll put a solid block of training in before Christmas and then see what opens up when it comes to competition.”

Ultimately, though, he just wants to know that he gave it 100%. “What I want out of running is to know that I applied myself. To know that I did everything in my power to run as well as possible. I could quit tomorrow and smile because I know I have applied myself to the point of near obsession. It’s rare in any walk of life for people to say they have done that.”