In praise of the European Cross Country Champs 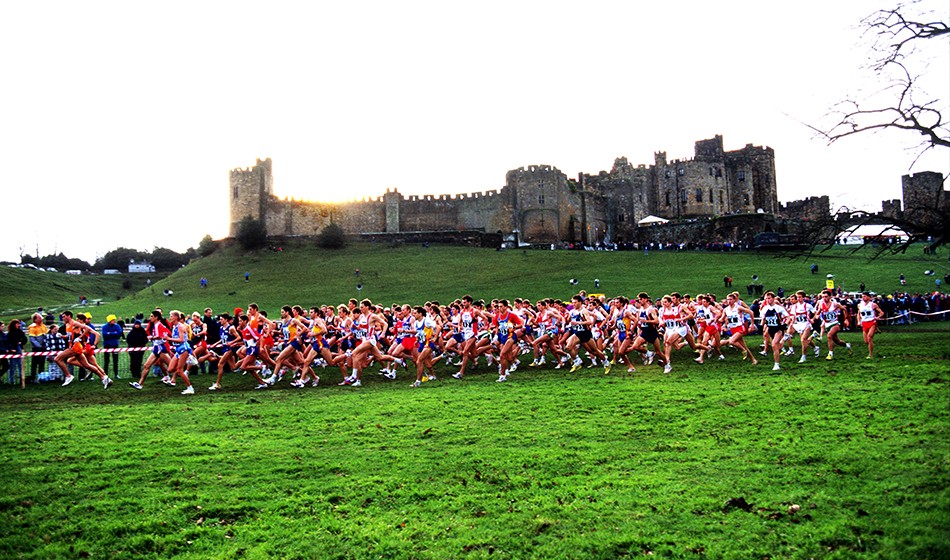 Exactly eight years ago I met up with AW photographer Mark Shearman and a group of hardcore cross-country fans at Luton Airport for a midday Wizz Air flight to Budapest for the European Cross Country Championships. There is always a buzz of anticipation at moments like this, but more than 12 hours later our excitement had dwindled because we were still waiting for the flight to take off.

A fire at Budapest Airport led to travel chaos for anybody trying to fly into Hungary. We weren’t the only ones affected either. Most national teams had their journey delayed or disrupted. Ultimately, our flight set off at gone midnight, we were diverted to Bratislava and then got on a coach before driving through the night and arriving bleary-eyed at our hotel in Budapest at gone 6am.

The situation was serious enough for European Athletics to put out a statement assuring everyone the championship would go ahead. Then, on race day itself, athletes and spectators faced sub-zero temperatures and Arctic winds on a snowy and ice-covered course in Szentendre, about 20km north of Budapest.

For anyone who has been to the European Cross Country Championships, though, you will know the pain was worth it. When it comes to athletics events with the “feel-good factor”, it is right up there are one of the best on the calendar. If you’re British, it is also a medal-fest and at this particular 2012 event every single member of the British squad returned home with a medal of some colour. 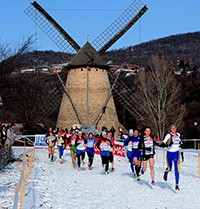 The GB team was led by Jess Piasecki (née Coulson) who won the under-23 women’s race (pictured right). It was a great day for Ireland, too, as Fionnuala McCormack (née Britton) became the first woman to successfully defend her title at the event, leading her country to team gold for good measure.

The European Cross Country Championships was first held in Alnwick in 1994 and saw victories from Paulo Guerra of Portugal and Catherina McKiernan of Ireland.

An image from the start of that first-ever men’s race can be seen at the very top of this article and the event returned to the same venue in the north-east of England the following year for the second staging with Guerra successfully defending his title and Annemari Sandell of Finland taking the women’s race.

It didn’t take long before Great Britain began to make an impact and Jon Brown’s victory (see below) on a mud bath of a course in Charleroi, France, in 1996 set the tone for what has become a traditionally successful event for the country. 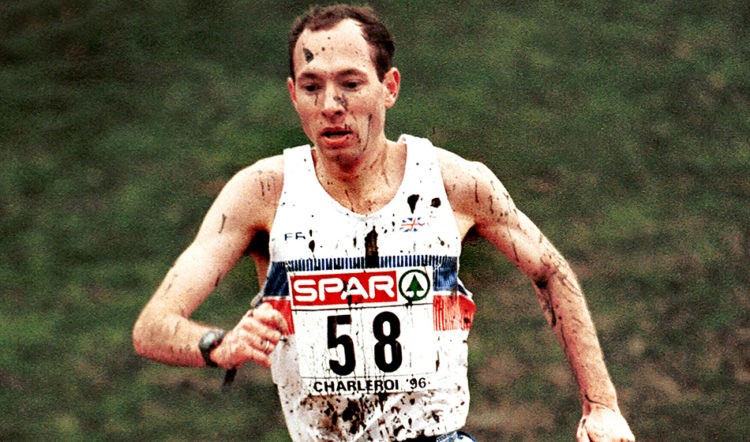 Cross-country running is striving to return to the Olympic Games. But many of the world’s top endurance runners on the track and road first made their mark on the country with an event like the Euro Cross being one of the most popular competitions over the years.

Paula Radcliffe, for example, won the senior women’s title in Ferrara in 1998 and retained it in Edinburgh in 2003 on the Holyrood Park course (pictured below). The latter came in the same year she ran her long-standing 2:15:25 world marathon record in London and she probably barely earned any money from the cross-country race in comparison, but she realised that good cross-country running ability forms the bedrock of success on all surfaces. 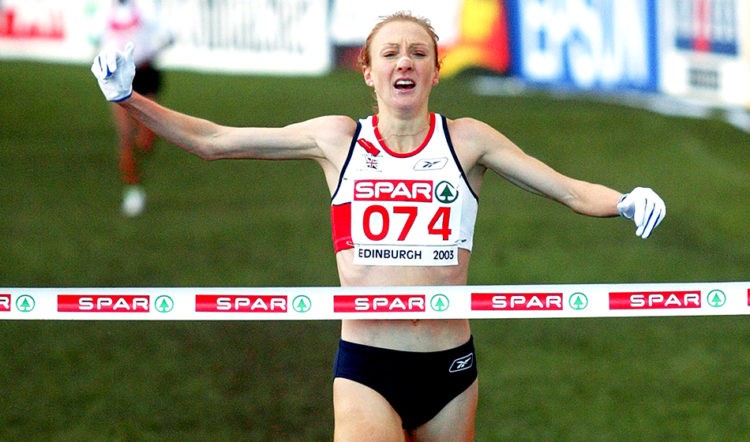 Incidentally, the trip to the Euro Cross in Edinburgh in 2003 was rather easier than the one to Budapest in 2012. It involved a simple but tiring one-day return trip from Stansted Airport.

Brits aside, one of the athletes who is most closely associated to the Euro Cross is Sergiy Lebid. The Ukrainian (pictured below winning in Heringsdorf in 2004) took an incredible nine senior men’s titles from Ferrara in 1998 to Albufeira in 2010. What’s more, he won a few minor medals too. 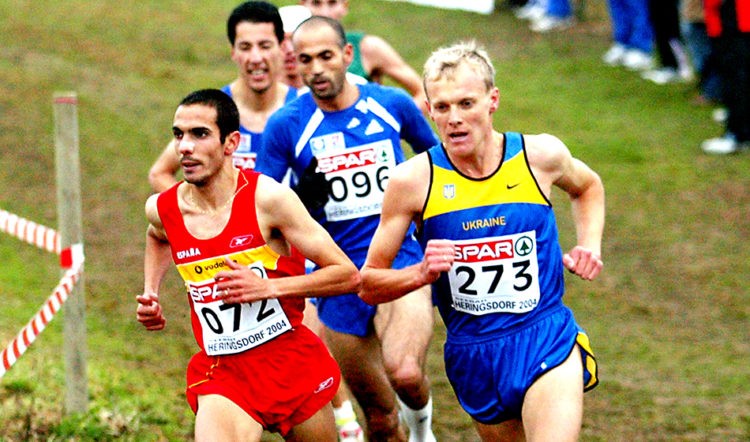 Lebid never quite enjoyed the same success at the World Cross Country Championships, with a best place of second in 2001. Of course it has always been a mild dilemma for endurance athletes as well – do they target the global championships in March, or the slightly less competitive European event in mid-December, or both?

Similarly, Ireland’s Catherina McKiernan finished runner-up in the World Cross no less than four times, but she tasted gold at the Euro Cross at the inaugural event in Alnwick in 1994 (see below). 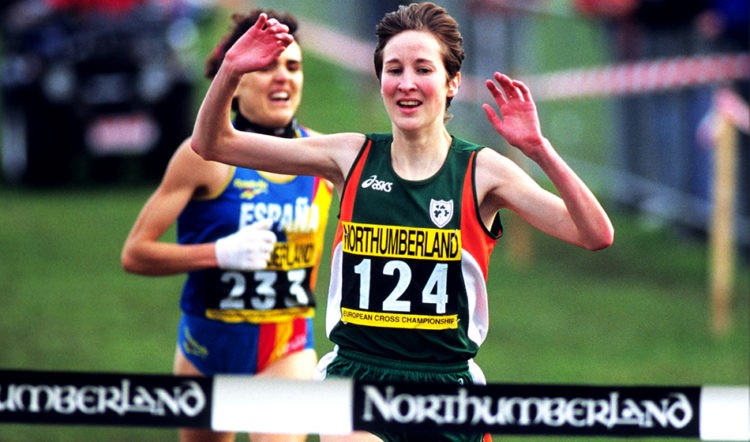 Senior athletes aside, the Euro Cross has been an event where under-20 and, from 2006, under-23 athletes could thrive. The junior women’s race has proved a particularly successful hunting ground for British athletes, for example, with one of the most spectacular results in Euro Cross history coming in Brussels in 2008 when Brits filled the top six places as Steph Twell led home Charlie Purdue, Lauren Howarth, Emily Pidgeon, Emma Pallant and Laura Park (pictured below). 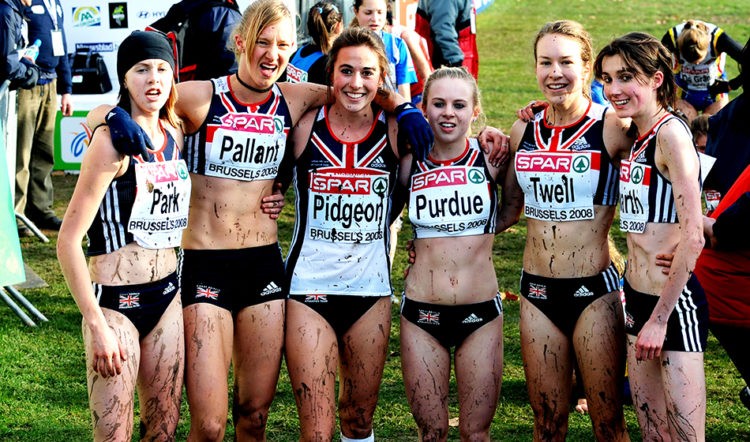 Mo Farah also used the Euro Cross as a springboard for success. He won a couple of team golds as a junior and finished runner-up as an under-20 to Vasyl Matviychuk of Ukraine at Thun.

Then, in San Giorgio su Legnano in 2006, he enjoyed one of his first big victories as a senior on the international stage (below) and it remains his only Euro Cross title to this day. 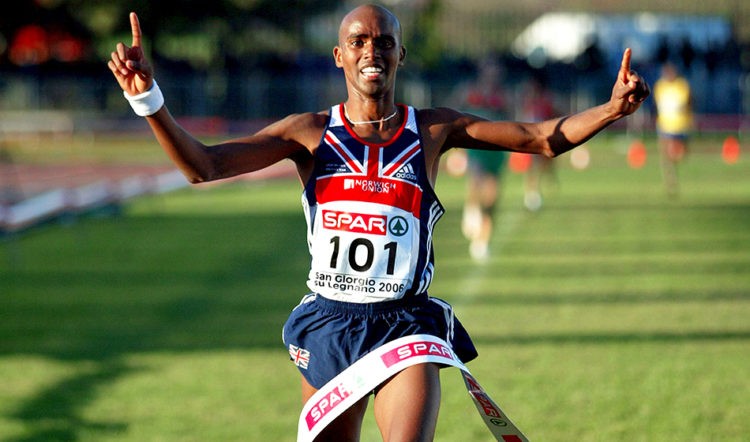 The Euro Cross has been run on a variety of courses, too, over the years. From mud and hills to flatter, dustier courses, runners have had to adapt to a variety of terrains.

In Albufeira in Portugal in 2010, for instance, there was firmer footing than usual and while Lebid and Jessica Augusto took the senior titles, the under-20 women’s race was won by Purdue with team-mates Emelia Gorecka third and Lily Partridge ninth (all pictured below). 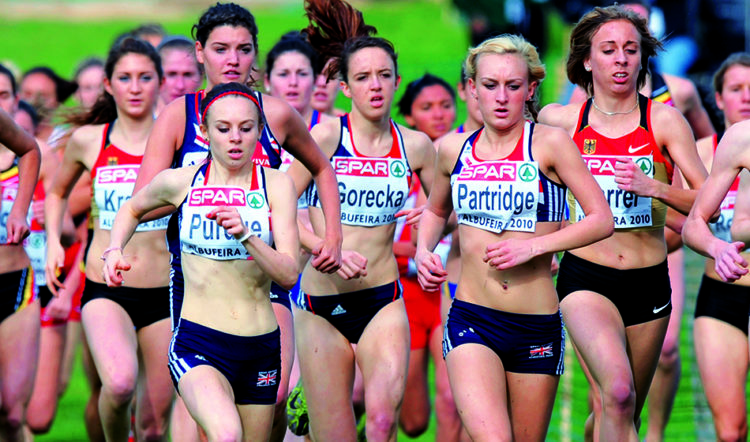 Gorecka won under-20 women’s gold in 2011 in Velenje and was runner-up to Amelia Terzic of Serbia on the icy Szentendre course in 2012 before retaining her crown in Belgrade in 2013 (below).

She went on to enjoy a number of good senior performances as well, whereas team-mates like Purdue, Twell and Partridge have matured into top marathon runners.

Below she can be seen winning the 2006 title in Italy with GB team-mate Pidgeon close behind. Later, Twell went on to win a number of senior and under-23 team titles too. 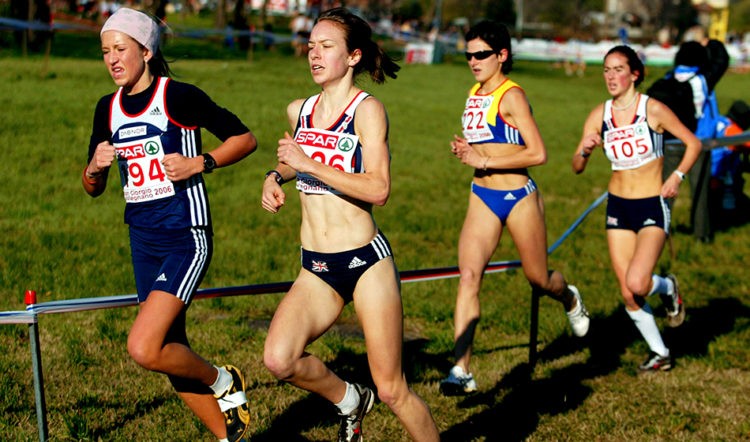 Another great talent, Jakob Ingebrigtsen, has won a remarkable four consecutive under-20 Euro Cross crowns. He took his first gold in Chia in 2016 followed by Samorin in 2017, Tilburg 2018 and Lisbon 2019.

Below Ingebrigtsen, who had only just turned 16 at the time, can be seen chasing leader Yohanes Chiappinelli of Italy and Mahamed Mahamed of Britain at the 2016 event in Italy. 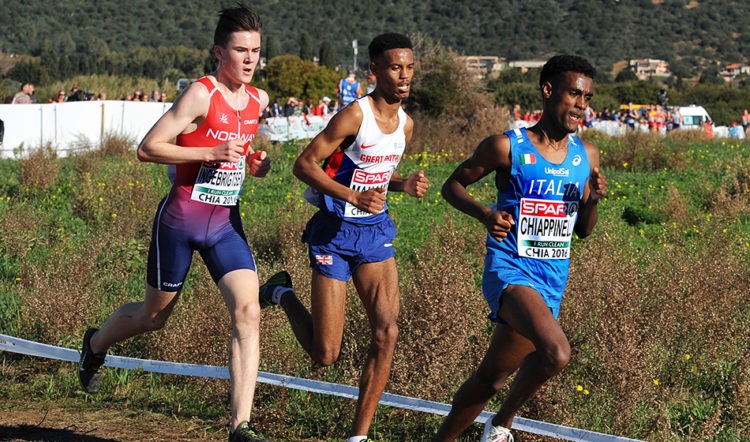 The Euro Cross has also seen a number of exciting finishes over the years. It’s featured some interesting ones too such as Jimmy Gressier’s famous ‘face plant’ into the mud when the Frenchman won the under-23 title in 2018.

In 2014, meanwhile, the race was held on a winter ski resort in Samokov and Gemma Steel and fellow Brit Kate Avery were so close at the finish line (see below), they were given the same time although Steel was awarded gold. 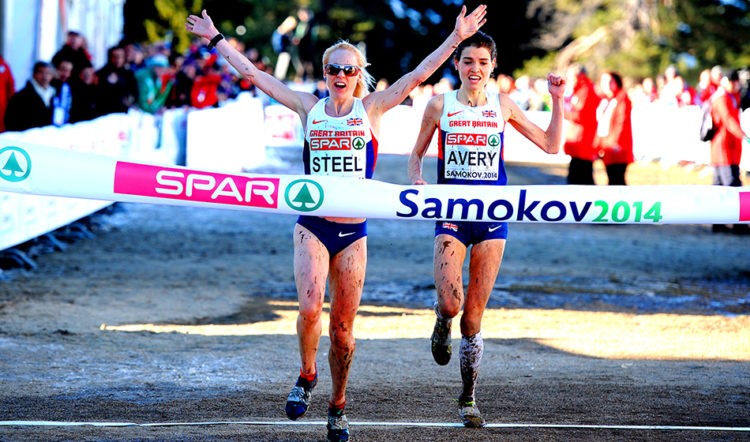 The 2009 event was also a memorable event when it was held in Dublin. The men’s race saw Farah and Lebid surprisingly beaten to the men’s title by Alemayehu Bezabeh – although the Spaniard was later caught up in a doping scandal.

In the women’s race in Dublin, Hayley Yelling came out of retirement to take gold (see below) … five years after she first won the title in Heringsdorf in 2004. 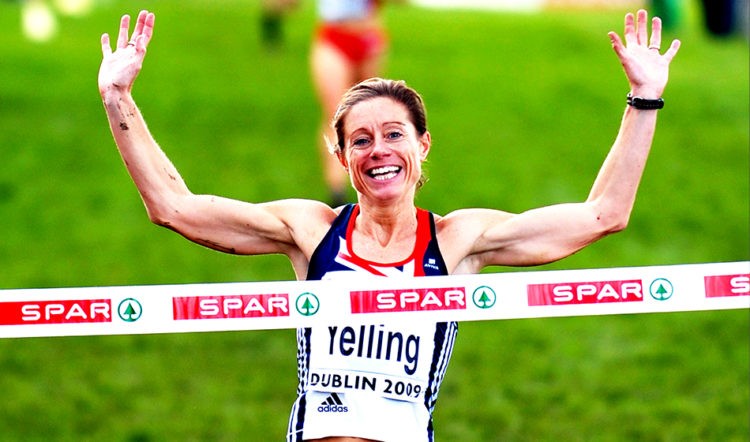 As the Euro Cross has evolved to include under-23 races, we have also seen the introduction of a mixed relay race – and it has proved a popular addition.

The 2017 title, for example, in Samorin was won by the British quartet of (below, left to right) Cameron Boyek, Sarah McDonald, Melissa Courtney and Tom Marshall. 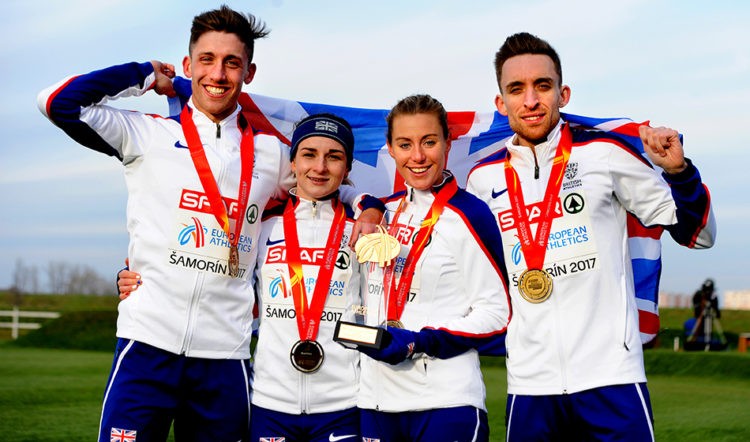 The event that was supposed to be held this Sunday in Dublin will eventually take place on December 12 in 2021. In 2022, meanwhile, the championships is due to return to Italy with Turin set to stage the races.

Hopefully this weekend’s cancelled meeting will be a mere blip as well and the Euro Cross will continue its rich and entertaining history next year and beyond.