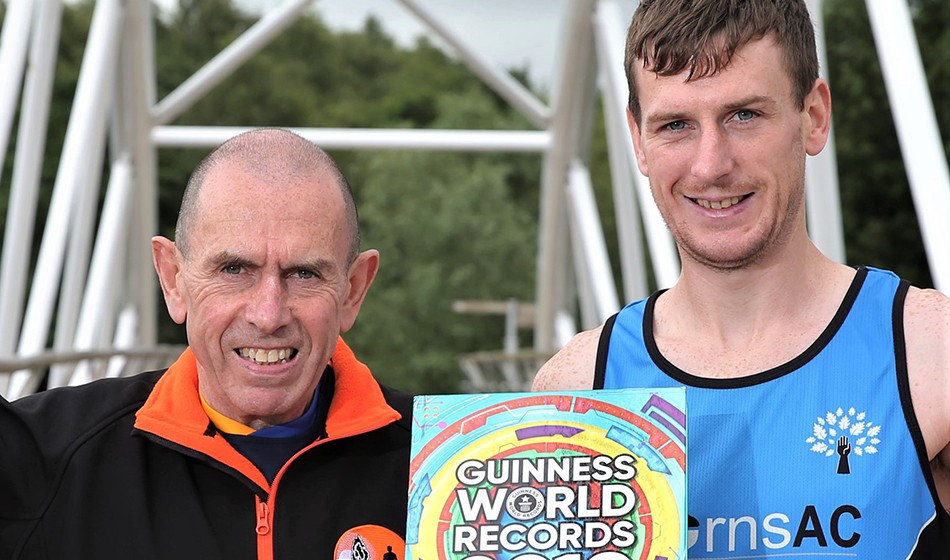 That took two minutes and 50 seconds off the previous record mark set at the 2014 London Marathon by Graham and Ben Green from Warrington.

Another record attempt by Tommy and Eoin at the Belfast Half Marathon last September saw the County Derry men come up 20 seconds short of the combined 2:20:33 goal, despite Eoin finishing second overall in 68:30.

Eoin entered the veteran ranks in January this year while Tommy turned 60 the same month and they had hoped to compete in the World Masters Championships in Canada in August before it became one of the many fixtures cancelled as a consequence of the Covid-19 pandemic.

A recent study of their Frankfurt performance, published in the Journal of Applied Physiology, has thrown up some interesting data. The study analysed the divergent physiologies and athletic histories of the father and son. Not surprisingly, it raised intriguing questions about the roles of genetics, environment and training in marathon success and it highlighted that one person’s route to a fast time could be quite different from another’s, even in the case of a father and son.

The new study followed an earlier screening of Tommy following his single-age world record of 2:30:15 in Rotterdam in April 2019. That performance caught the attention of researchers at a number of institutions who study elite athletes, including the Inserm research organisation in France.

They promptly invited Tommy to their lab for a detailed examination into what made him so outstanding for his age. They were already aware that in his prime he had represented Ireland in the marathon at the Barcelona Olympics in 1992, finishing 72nd in 2:32:55, five minutes slower than he ran in Frankfurt. He then quit running for 16 years before signing up for the 2008 Belfast Marathon where, with little training, he finished sixth.

The researchers found that his aerobic capacity, even at 59, remained exceptionally high despite years without running. The scientists put this down to his training regime that sees him log at least 100 miles every week by running twice a day and using local 5km and 10km races as speed work.

During the testing, Tommy mentioned that he and his son Eoin were planning to enter the Frankfurt Marathon, with the target of breaking the Guinness world record for fastest parent and child aggregate marathon time. The researchers saw that there was a unique opportunity to carry out a compare and contrast exercise into the physiological similarities and differences of the two runners.

So, they invited both of them to the lab and completed more tests, including measuring Eoin’s maximum aerobic capacity, which was found to be similar to that of his father. They tracked each man’s oxygen uptake (VO2) at various race paces so that the researchers could gauge how much effort they were putting in at any given time.

Then they waited for the marathon which, although it was a success in that they set a new world mark, produced divergent results for the father and son. Tommy finished almost four minutes ahead of his son with his pace hardly varying from start to finish. Eoin, on the other hand, went off hard at the start but then fell back, finishing the second half of the race about 6 per cent slower than the first 13 miles.

So what can you take from the study if you want to improve your running? The first thing is that there are more approaches to training than one. Nevertheless, high mileage and frequent races over shorter distances seems to work. The second is to choose your parents carefully. Eoin Hughes certainly did that.