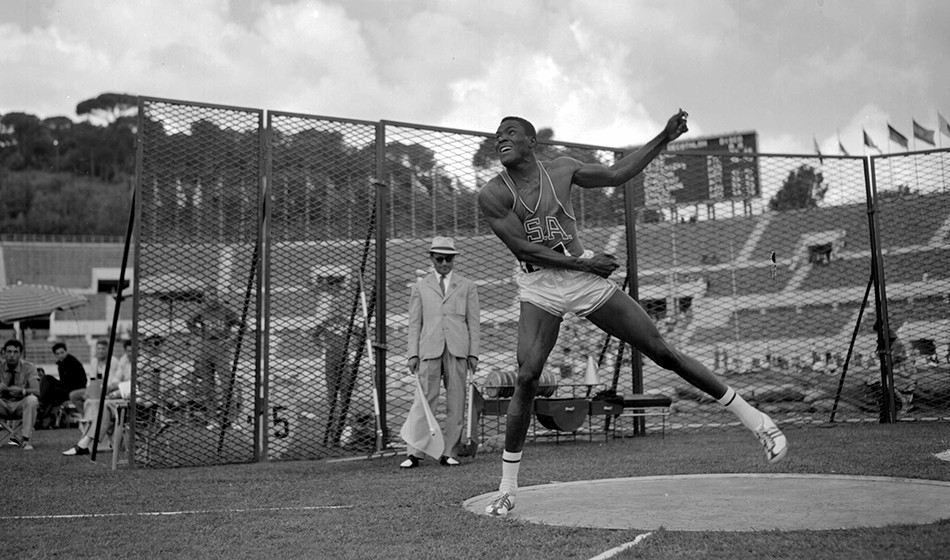 Rafer Johnson is best known for winning decathlon gold at the 1960 Olympics in Rome. Yet the American track and field legend, who died this week aged 86, achieved much more during his long and varied life.

As well as triumphing in Rome, he won Olympic silver in Melbourne in 1956 despite struggling with injury. He was flag bearer for the US team at the 1960 Games and later lit the Olympic cauldron at the LA Games in 1984.

Outside sport he was an actor in a number of Hollywood movies and TV programmes, whereas in 1968 he was one of three men to tackle the assassin who shot presidential candidate Robert F Kennedy.

Born in Texas in 1934, he moved to California with his family aged nine and earned money by picking cotton as a child. As he moved through his teenage years he excelled in American football, basketball and baseball and his overall athleticism proved ideal for decathlon.

After being inspired by watching two-time Olympic decathlon champion Bob Matthias compete at the 1952 US Olympic trials, Johnson’s own career began to flourish and in 1955, aged 20, he broke Matthias’s world record with a score of 7985.

In 1956 Johnson won the US Olympic trials decathlon and also qualified for the Games in the long jump. But injury caused him to pull out of the latter in Melbourne, whereas he took silver behind fellow American Milt Campbell in the decathlon.

Soviet rival Vasilly Kuznetsov improved Johnson’s world record at the start of the 1958 season, but Johnson reclaimed it on Kuznetsov’s home turf in Moscow at the first USA-USSR dual meet with a score of 8302.

Injuries scuppered Johnson during this period – especially in 1957 and 1959 – but he was named Sports Illustrated sportsman of the year in 1958 and then returned to form in 1960 to claim Olympic gold.

“With former world record-holder Kuznetsov not quite at his best,” the AW report in September 1960 read, “the ten-event grind quickly resolved itself into a personal duel between those two close friends and training mates Rafer Johnson and Yang Chuan-Kwang… and after the first five events Johnson held a slender lead of 55 points.”

On the final day’s action, AW reported: “The decathlonists, who were in action until after midnight because of delays caused by a flooded track, resumed bleary-eyed at 9am. The high hurdles, one of Johnson’s strongest events, was disastrous for the American. In winning his heat against a 3.6m/sec wind, this 13.8 performer clocked a pedestrian 15.3, while Yang won through in 14.6 (4.5m/sec against).

“The Formosan (Taiwanese) now held a 128-point lead. But Yang, less heavily muscled than his UCLA colleague, inevitably lost ground in the discus and Rafer went ahead by 144 points.”

Yang reduced the deficit to 24 points after a long and gruelling pole vault contest before Johnson pulled ahead during the javelin to enjoy a 67-point lead going into the final event – the 1500m.

“The few thousand faithful spectators who had braved the chilly night to watch this fascinating duel were going to get their money’s worth!” AW’s reporter, Mel Watman, continued. “Johnson sensibly tucked behind Yang right from the start and the onus was on the Asian to pull away by some 50-60 yards. Yang went through 400m in 72.0, with Johnson a stride behind. At 800m (2:31) the position was the same, as it also was at the bell (1100m) reached in 3:33.

“Strive as he did, Yang could not open up an appreciable gap and, to tumultuous cheers, Johnson came home about seven yards behind to win the title by just 58 points in an Olympic record of 8392.”

On a day that also saw Herb Elliott break the world record in the 1500m and Jozef Schmidt win what was, at the time, the greatest triple jump contest in history, AW described it as “one of the most memorable day’s athletics in the sport’s history”.

Retiring at his peak, Johnson moved into acting and went on to feature in the James Bond film Licence to Kill, where he played a DEA operative called Mullens. Other appearances included the Elvis Presley film Wild in the Country, Tarzan and the Great River, plus TV episodes of Mission Impossible and Quincy.

In addition, he worked as a presenter for NBC and effectively played himself when commentating on the Olympic marathon in the 1970 film The Games. The decathlete legend also nearly got a key role in Spartacus with Kirk Douglas. Johnson was offered a part in the run-up to the Rome Olympics but had to turn it down as it would have broken his amateur status.

When it came to his heroics in helping to wrestle down the killer of Robert F Kennedy, Johnson had become good friends with him in the 1960s and was part of his presidential rallies when the shooting took place in Los Angeles.

In retirement from athletics, Johnson also co-founded the California Special Olympics in 1969 and in 1984 aged 49 was asked to light the cauldron at the LA Games. His brother Jimmy, meanwhile, went on to play football for the San Francisco 49ers.

He leaves behind his wife Betsy and children Jennifer and Joshua. Inheriting their father’s athleticism, Jennifer represented America in beach volleyball at the 2000 Olympics while Joshua took up javelin and has a best of 76.16m.

Described as the “quintessential American athlete”, Rafer Johnson’s career will not be easily forgotten. In a statement, his former university UCLA said: “Words cannot sufficiently express what Rafer means to this athletic department, to this university and to our greater community.

“A true humanitarian, Rafer’s profound impact transcends sport. He will forever be remembered not only for his historic athletic achievements, but also for his heart and for the tremendous example he has set for us all.”