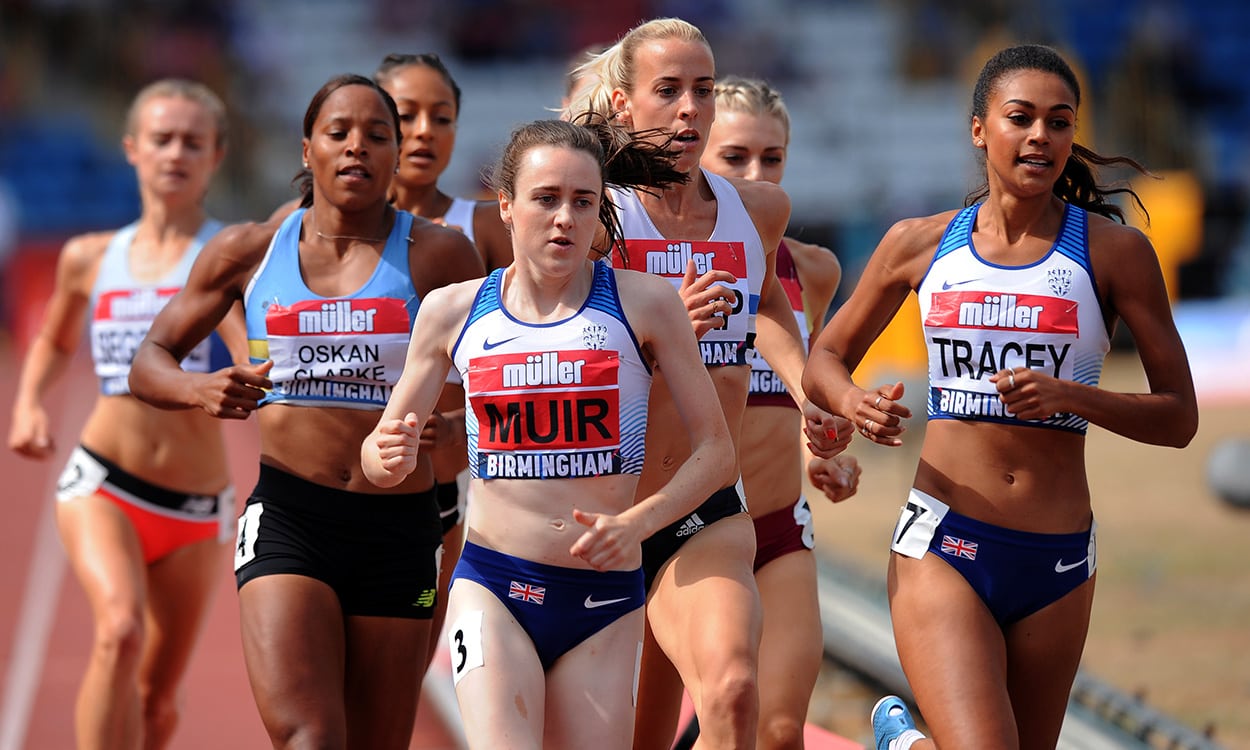 British Athletics has named a 102-strong team for the European Championships in Berlin from August 6-12.

It is set to be the biggest team the nation has sent to a major championships in the modern era.

At the Müller Anniversary Games over the weekend, where Muir clocked 4:19.28 for fifth in a fast mile, the Scot confirmed that she would be asking selectors to consider her for both the 800m and 1500m.

She was initially selected for both but having suffered irritation to her Achilles following the Anniversary Games race, she took the decision on Monday night to focus on the 1500m only.

Muir had won the British 800m title ahead of Shelayna Oskan-Clarke in Birmingham, and joining Oskan-Clarke in racing the two-lap event in Germany will be Adelle Tracey – third at the trials – and Lynsey Sharp, who ran 1:59.34 over the weekend and sits second to Muir on this season’s rankings.

In the men’s 1500m, Charlie Da’Vall Grice gets the nod over Neil Gourley for the final place on the team and will join Chris O’Hare and Jake Wightman in that event in Berlin.

As the defending 200m champion, British record-holder Asher-Smith has been named for both the 100m – the event in which she won the British title – and the 200m, as well as the 4x100m relay. Her fellow defending champion Martyn Rooney has also been included for the 400m.

CJ Ujah has been handed the third 100m place and Delano Williams the final 200m spot. After her 11.11 PB in London over the weekend, 20-year-old Imani-Lara Lansiquot gains the third place in the women’s 100m.

Molly Caudery is the youngest member of the team aged 18 and is one of nine athletes set to make their senior GB debut. That list also includes her fellow pole vaulter Lucy Bryan, Daniel Rowden in the 800m and Jamaine Coleman in the 3000m steeplechase.

After placing third at the British Championships in the 5000m and having also finished as the third British athlete in the Highgate Harriers 10,000m trial race, 37-year-old Chris Thompson, who won 10,000m silver at the 2010 championships in Barcelona, has been selected for both events.

Six athletes were chosen for the women’s marathon in April, however Alyson Dixon has been forced to withdraw through injury.

“The standard of performances from British athletes since the Commonwealth Games in April has been extremely high and therefore competition for places to Berlin has been more competitive than ever,” said British Athletics performance director Neil Black. “This is a huge opportunity for athletes to demonstrate form ahead of two global championship summers.

“It is fantastic that for the first time ever more women than men have been selected and this underlines further that athletics is a truly equal sport while I would like to congratulate both Anyika (Onuora) and Eilidh (Doyle) on what will be their fifth appearance for the British team at the European Championships.

“The team is our largest for over 100 years and we look forward to watching them thrive under the spotlight of a major championships. These European Championships are an important marker on the road to the Tokyo 2020 Olympic Games and we expect to be competing for medals at every turn.”