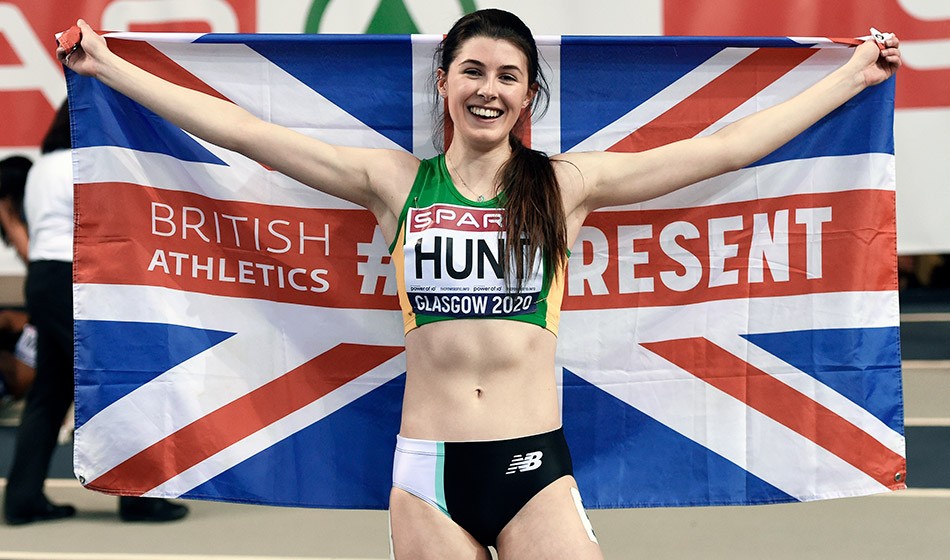 For many, the postponement of the Olympics in Tokyo was a huge blow. Fans were looking forward to the action. Older established athletes were keen to compete while they were still at the peak of their careers.

Yet mention the delay of the Games to sprinter Amy Hunt and the teenage sprinter’s eyes light up and she smiles. “For young British athletes like myself, Keely Hodgkinson, Lucy-Jane Matthews and Max Burgin it’s such an incredible chance that wasn’t expected.

“We’ve been given this extra year and it’s a year to get fitter and faster before trying to make our first Olympic team. So I think it’s worked out really well for me.

“There are no negatives for young athletes like me when it comes to having the Olympics pushed back because we’ll have a better chance of being selected when those trials come around.”

In 2019 Hunt won the European under-20 200m title and set world under-18 and British under-20 records at the distance. This year another great sequence of results has led to her being named AW readers’ junior female athlete of the year again in 2020.

In February she won the British indoor 60m title in 7.39 before improving to 7.36 for fourth at the Müller Indoor Grand Prix in Glasgow. Then, when outdoor track meets started, she raced exclusively at 100m instead of 200m at events ranging from the British Champs in Manchester, where she was fourth, to her first Diamond League in Doha, where she placed sixth.

“I can’t describe how good it was to go to my first Diamond League in Doha,” she says. “To experience the hype and energy there was really fun.”

She turns 19 in May and is looking forward to returning to her specialist distance of 200m after spending 2020 working on her ability get out the blocks quickly. “We also felt the biggest gains were to be made over 100m and we treated it almost as a freebie year,” she explains.

“We stripped back and focused on that start again and it definitely really helped and I saw an improvement in my start. At the British Champs I felt really confident and able to put together a first 20m.”

She adds: “It was interesting to have the focus on the 100m because going into an event knowing it’s not your favourite event and to be one of the slowest was an interesting process for me to learn. It was good to head into a race not being too star-struck and to just focus on my lane.” 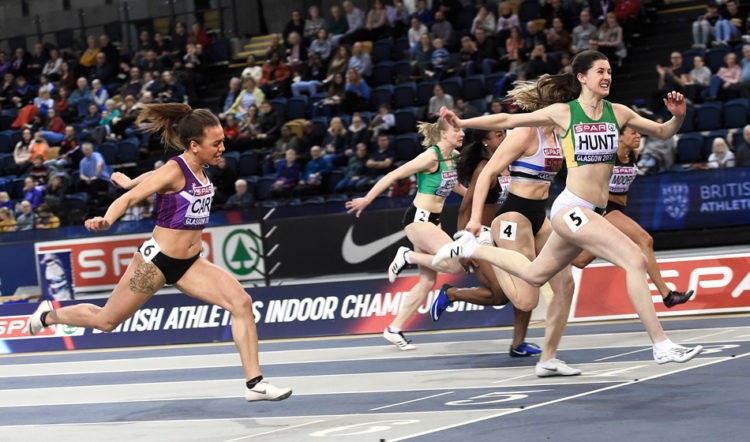 Hunt also began studying for an English degree at the University of Cambridge. Keen to excel in athletics and her academics, she believes she made the right choice and now has the best of both worlds.

“I think I made the right decision,” she says. “It wasn’t an easy one to make. There were lots of pros and cons and a lot of people offered their opinion about it. However in the end I knew it was my decision to make.”

Despite this, she has spent periods of the academic year so far back in Loughborough due to the lockdown in England in November, for example, plus the fact most students are doing lectures online. This has allowed her to train with her coach Joe McDonnell and use Loughborough’s facilities. Still, she has missed being in Cambridge itself for large parts of her fresher year so far.

Cambridge, of course, has a considerable athletics tradition itself. There is a long-standing debate with Oxford over which of the two universities has the oldest athletics club in the world. Cambridge has also produced its fair share of Olympians, such as 1924 Olympic 100m champion Harold Abrahams from Chariots of Fire fame.

“Generally when you’re walking around the city sometimes it hits you that people like David Attenborough, Lord Byron, Steven Hawking went here. It stops you in your tracks a bit and can seem very surreal to think I’m a student here who has been given such a great opportunity. I feel very lucky but I also recognise I did work very hard to get there too.”

Was her decision to study at Cambridge led by her head or her heart? “I think it was very much driven by the heart,” she says. “Once I had my interview (about 12 months ago) I was pretty much set on the decision. The idea of a big looming interview puts people off but it was one of the most enjoyable things I’ve ever done.

“You go to this historic college with loads of amazing alumni and sit in front of world-leading impressive academics and have a really nice chat about English and it’s a really good opportunity to have a discussion with people who share your interests.

“I didn’t come out of it being upset but had a big smile. From that moment my heart was set on Cambridge.”

Amusingly, Hunt has been trying to improve her speed when it comes to running … and also reading. Given the large amount of books she needs to get through each week, she has been working on her ability to read faster.

She has also stepped up her training on the track and in the gym. “Heading into next year I’m in a really good position,” she says.”I have more confidence in my technical abilities and during what has been effectively a free year I’ve upped the amount of time I’ve done in the gym. Now three a week and I’m seeing a lot of gains from that.”

She adds: “This winter increased track sessions and gym so I now train six days a week. It was rough for my body to deal with for the first two weeks but I’m not getting used to that kind of exertions and I’m discovering recovery techniques that work for me.

“I really do enjoy winter training in a bit of a sadistic way. I’ve liked being back on the track and in the gym this winter. If you want to get to a certain level, you have to love what you’re doing. My coach Joe is always cracking jokes and creates a really good environment to be in.”

Despite her workload, she is getting more sleep now too. “I don’t need to get up at 6am to get the school bus. It’s more manageable now because everything’s on my own schedule and it’s a lot more flexible now. I can also cook for myself too instead of being reliant on what the school canteen are doing.”

So what really motivates her to put on her kit and start training? Is it the Olympics or World Under-20 Championships next year? Or the idea of improving her PBs?

“I think it’s a combination,” she says. “But the most important to me is putting the work in so my idols become my rivals. That’s what gets me out of bed in the morning. I want to be the best that I can be and be up there with those people who I used to idolise and now want to race.”

As for those idols, she says: “A younger me definitely looked up to Allyson Felix a lot. I’ve always looked up to Dina (Asher-Smith) because she’s always such an amazing role model for the sport. She encompasses a lot of values that I hold dear to myself too.

“Shaunae Miller-Uibo is an amazing athlete and people like Shelly-Ann Fraser-Pryce have gone away and had a baby and returned to run well so there are lots of amazing female role models out there.”

So far she has not spent much time with any of them. The only time she has bumped into Asher-Smith, for example, was the Great CityGames in 2017. But she adds: “Hopefully I’ll be meeting most of them next year in Tokyo!”

» Amy Hunt is also featured in the December issue of AW magazine looking back on her 2020 season, which you can buy here