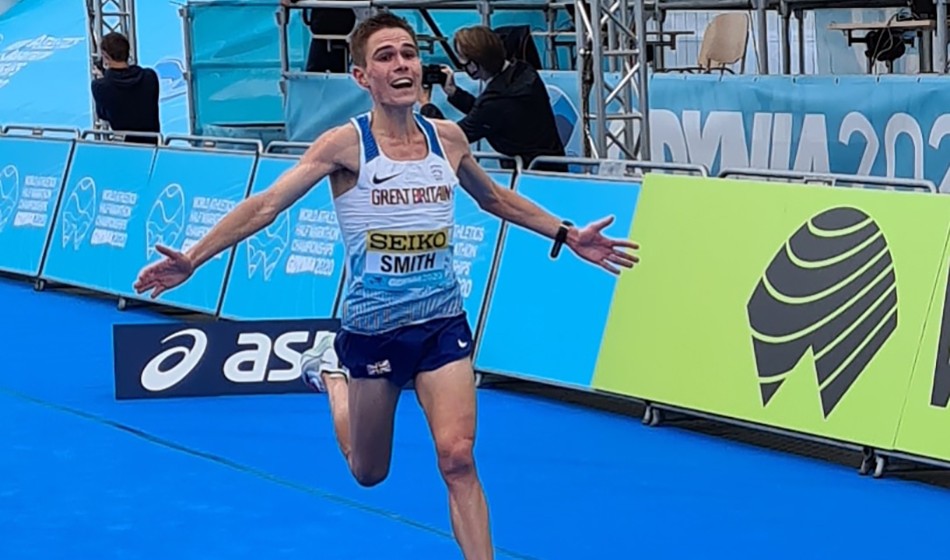 The leading Briton at the World Athletics Half Marathon Championships now sits third on the UK all-time list after his 60:31 run in Gdynia

Running as part of the lead group at the World Athletics Half Marathon Championships, Britain’s Jake Smith says he wanted to see how much TV coverage he could get. A fair amount, it turns out, and the 22-year-old’s impressive finishing time of 60:31 means he’s sure to stay in the spotlight.

When it comes to the British all-time list, only Mo Farah and Callum Hawkins have ever gone quicker for the 13.1-mile distance, while the mark improves Steve Jones’ long-standing Welsh record.

Smith had felt ready to run fast but admits his time came as a shock. The finish, where he was greeted by World Athletics president and two-time Olympic 1500m champion Seb Coe, was emotional.

“It was a crazy moment,” says the Cardiff-based athlete, who led the GB team to 10th place. “I’ve looked back at the race and the camera got me crying on the fence. It was the first time I’d properly met Seb Coe and I basically just started crying in front of him. Everything is surreal at the minute and I’m just still really in shock about what happened.

“I knew from my training that I was in really good shape and it was good because there was a massive group and I had to do none of the work. I got a 10km PB along the way, we went through in 28:20 or something, and apparently I gave a thumbs up to one of the coaches saying ‘I’m still in this’ and I was absolutely loving it. I knew I was on course for a really big time because I still felt really strong.

“To see 150m to go and go around that corner on to the finishing straight, I basically started tearing up from there really and just couldn’t believe it.”

The race was won by Uganda’s Jacob Kiplimo in a championship record-breaking 58:49 and Smith adds: “Luckily it wasn’t a very quick, quick start, so we could just hang on as much as we could.

“I think I made the TV quite a bit because I stayed with the front group and I just wanted to see how much coverage I could get!”

For Smith, everything in 2020 had been leading to that point. Despite the disruption, with the coronavirus pandemic having forced the postponement of the global event from March to October, the James Thie-coached athlete says the lockdown period was a blessing in disguise.

“I was training and recovering so well,” says Smith, who was born in Bermuda and lived in Hong Kong and then Devon in England before relocating to Wales to study at Cardiff Metropolitan University.

He credits coach Thie and fellow athlete Ciaran Lewis as well as Welsh Athletics for supporting him, with Smith recently having become Welsh qualified.

“Because I grew up in Hong Kong and lived in Bermuda, I have actually lived in Wales longer than I have lived in England,” he says.

“I was quite lucky, it was only like two weeks ago that I got the email that I had turned Welsh!

“I had my eye on it,” he adds, on targeting Jones’ record. “It was a crazy time and he’s a world record-holder and he has done so many things in his lifetime.

“That was almost the ultimate goal and then when I saw my time, I am just still in shock. I can’t believe it happened.”

Further coverage of World Athletics Half Marathon Championships action can be found here.